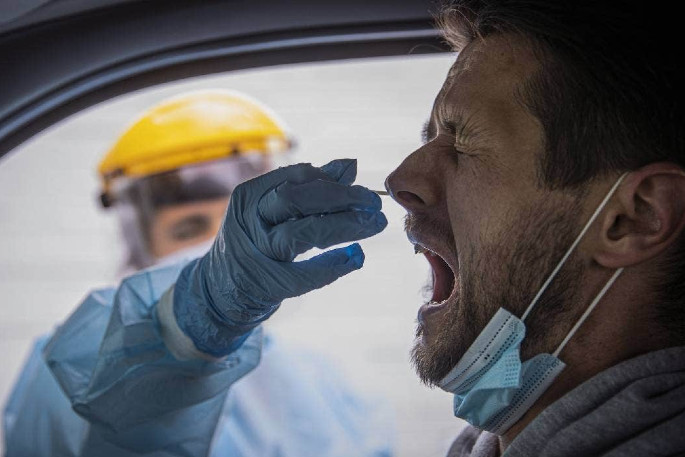 The Delta outbreak has grown to over 1500 cases with 31 cases shown to have been infectious in the community. Photo: Christel Yardley/Stuff

There are 34 new community cases of COVID-19 reported today of which 31 are in Auckland and three in Waikato.

The Ministry of Health are also reporting that 31 cases identified since Friday have been infectious in the community. Saturday's update means the outbreak has grown to 1527 cases in total.

Two new cases identified at the border are in managed isolation. More than 85,000 vaccines were administered on Friday.

Of the 34 new community cases, only 23 have already been linked to the current outbreak, of which 11 are household contacts, and another 11 cases are still being investigated to determine how they are linked.

All of the three new Waikato cases are linked to the initial Hamilton East case.

There are 26 cases in hospital, with three in North Shore Hospital, 13 in Middlemore Hospital, eight in Auckland Hospital, one in Waikato Base Hospital and one in Palmerston North Hospital. Of these seven cases are in ICU or HDU.

Positive wastewater results have been detected in Hamilton and Palmerston North on October 6 and 7.

As of 10am on October, a total of 267 locations of interest have been reported.

Three more Northland locations of interest linked to New Zealand’s Covid-19 Delta outbreak have been revealed, including a dairy, a hotel and a campsite.

Pepe’s Dairy and Comfort Hotel Flames in Whangārei were visited by a person with Covid-19 on October 3 and October 2 between respectively.

The Department of Conservation’s Uretiti Campsite in Waipu was also visited on October 3.

It follows an announcement on Friday that Northland would go into Covid-19 alert level 3 at 11.59pm, after a woman who entered the area from Auckland tested positive for the virus.

Anyone who was at the locations at the specified times has been advised to self-monitor for symptoms for 14 days.

The search for a woman who travelled around Northland with another who later tested positive for Covid-19 continues as authorities fear she too may be infected.

It is understood the women are sex workers with gang links and they stayed together at a hotel in Whangārei some time in the past week.

Uretiti Beach Campsite manager Adrien Chevrier told Stuff Northland DHB informed him on Friday that someone with Covid may have stayed at the campsite from October 5 to 6.

The campsite was put into lockdown, with 30 to 40 campers asked to stay there until at least Tuesday, when restrictions could be lifted if there is no further spread in the region.

"We have our own bubble now," says Adrien.

Chevrier said the DHB told him it was a "possibility" that those who visited the campsite with Covid may have been sex workers.

The positive case, who gained entry to Northland using false documents, has since returned to Auckland where she has been uncooperative with health authorities and contact tracers who are trying to find out where she has been in a bid to alert contacts.

The other woman remains at large, and it is understood authorities believe she is also likely to have the virus given the time the pair spent together.

Whangārei resident Colin Thew, who arrived at the Uretiti Beach campsite in his camper van on Friday, said management had since told campers they were free to leave if they wished.

Campers have also been told they may stay until Tuesday, as the Department of Conservation, which runs the camp site, was still deciding if it would close.

Thew said he would stay until Tuesday, as his other plans were not possible now due to the region was in lockdown.

“It’s a stunning spot to be stranded. But at the same token, I’m very wild about what this person has done to Northland.”

Earlier, the Ministry of Health has asked that anyone who was at the Harbour View Hotel in Raglan at any time on October 2 and 3 to get tested and self-isolate immediately, after a person with Covid-19 visited.

Also added to the list on Saturday were Vege King Fairfield and the Frankton Red Cross Shop in Hamilton, Kingsford Home Bakery and More in Māngere East, Curry of India in Devonport, Challenge Massey, a Kiwibank ATM in Papatoetoe.

Anyone who visited those locations has been asked to self-monitor for symptoms.

The Ministry of Health has also asked anyone who was at Z Kensington between 3.45pm and 4.45pm on October 4 to stay home and get tested immediately.

Anyone who was at BP Connect Wylies Woodhill between 11.20pm and 12.20am on October 2 is asked to self-monitor for symptoms.

The second case at the border was already reported on September 16. The case was then reclassified as under investigation and was today confirmed as a case.

White Sunday
The Ministry of Health is asking that the Tuvalu, Samoa and Tokelau communities, particularly in Auckland, please use online virtual services or to keep their services within approved bubble sizes when celebrating White Sunday or Lotu Tamaiti tomorrow.

The new cases in Waikato are linked and is a contact of an existing case. Interviews are continuing to determine any further contacts or locations of interest.

There continues to be a strong response to calls for testing in Waikato with 5000 swabs taken yesterday. There are pop up testing sites operating today at Claudelands, Te Rapa, Karapiro, Raglan and Kawhia. The existing testing centre at Founders Theatre is also open.

Further details on exact locations and hours of testing sites are available on the Healthpoint and Waikato DHB sites.

The Ministry of Health urges anyone in the Waikato with any symptoms that could be COVID-19 to get a test.

Waikato turned out in record numbers yesterday to get vaccinated with 9,946 doses given, with large increases seen in rural areas. 78.2 per cent of people in the Waikato have now received their first dose and 52.6 per cent are fully vaccinated. A big thank you to everyone who came forward.

Alert levels for the whole of the Waikato will be reviewed again on Monday.

A second person, who is thought to have travelled with this case, has not yet been able to be contacted.

The case was under investigation after returning a weak positive result from a test in Whangarei earlier this week and Friday returned a positive test result in Auckland.

As these become available they will be added to the Ministry’s website as quickly as possible. We ask people to check these regularly, especially if you have visited, or live in Auckland, Waikato or Northland.

Anyone in Northland who is symptomatic or has visited a location of interest or been in an area of interest at the times specified should get tested and isolate until they receive the result.

Bookings are not required for any of the sites. Over the last 24 hours to 8am, 672 tests were taken across Northland.

Northland vaccination
Northland DHB, local iwi and providers are are working hard to ensure as many Northlanders are vaccinated as possible.

There’s also a drive-thru site operating in Whanagrei today, which vaccinated 120 people in the first hour.

Vaccination numbers have doubled with more than 10,000 so far this week and the team on track to deliver more than 12,000 by the end of the week.

Vaccination and testing centres available in the MidCentral rohe for the weekend are:

The Ministry of Health urges anyone who has symptoms, no matter how mild, to please get tested.

Next update
The Ministry’s updates over the weekend will be via media releases unless there are any significant developments.

If you were at a location of interest at one of the specified times, you will likely need to self-isolate and be tested. Follow the instructions for that location on the Ministry of Health website and call Healthline on 0800 358 5453 for advice on testing.

This list is automatically updated as soon as locations of interest appear on the Ministry of Health website.