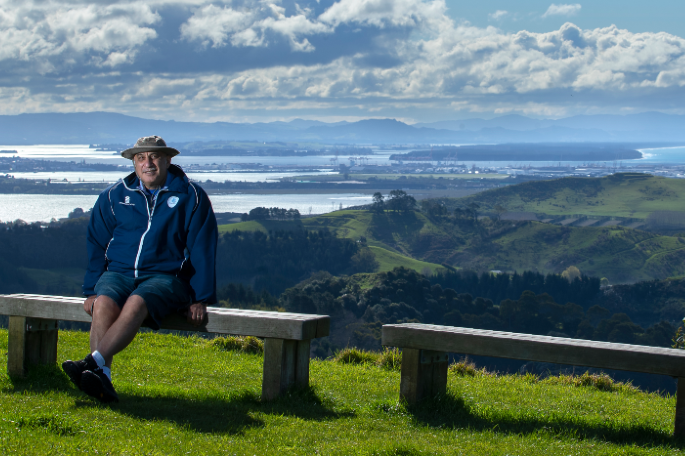 The panoramic views atop the Pāpāmoa Hills are breathtaking, but most people don’t realise the rich history that surrounds them and the rest of the region.

One Tauranga man is making it his mahi to change this by doing guided hīkoi up the maunga and sharing stories of the region’s kōrero o mua (history and traditions).

Les Millard has been hosting walks once a month since the start of the year, and The Weekend Sun was treated to one of our own.

He walks the Pāpāmoa Hills two or three times a week, and realised a lot of the people he passes probably have no idea about the hills’ mana.

“People walk up and down these hills, but they don't really know about them,” he says.

“They just know it as someplace to exercise.

“The coastline of the Bay of Plenty has so much to offer in Māori history and contemporary experiences.”

As we wander through the pasture towards the trig, Les points out landmarks where the four waka from Hawaiki landed, and informs us about which iwi came from each one.

He pauses to share the story of how Katikati got its name before continuing with tales of each waka.

Les’ knowledge is extensive and based on years of research and kōrero with kaumātua.

When we reach the crest, Les takes out a piece of obsidian/tūhua and pounamu and demonstrates the story of Mayor Island/Tūhua.

He says the people who lived on Tūhua were challenged by a host of warriors called Pounamu who came from the sea in waka. They wanted a piece of tūhua but the Tūhua people refused and a battle ensued.

“Inside the crater you have two lakes; one coloured green, one coloured black. This the is blood of the Tūhua people and the people of Pounamu.”

The orator is incredibly engaging as he speaks, and he’ll often add in a personal anecdote as well.

Les regales us with the well-known story of Mauao and the lesser known kōrero about the three whales.

The hīkoi are by koha and take around three hours. Les offers two tracks - one from the Summerhill carpark and the other starting at the Poplar Lane carpark.

“It’s about people connecting with the environment they live in or are visiting,” he says.