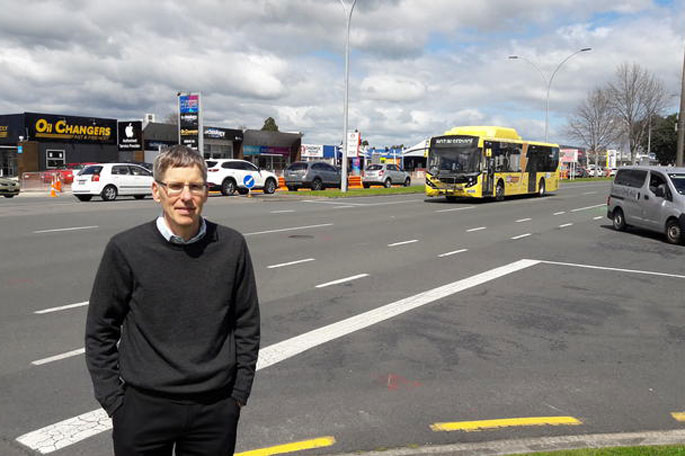 Hugely significant; hugely costly; hugely wrong. They are all ways being used to describe the largest overhaul of the main street heading into the centre of Tauranga.

Construction began this week on the Cameron Road upgrade, with the budget already topping $70m.

That's a new-highway-level of cost for 3km of part-time bus and cycle lanes, and footpaths, and roadway that - controversially - retains four lanes for cars.

Nine community groups have joined forces to try to stop it.

They accuse the city council of pushing through a half-baked design that will only add to vehicle emissions, contrary to government goals.

Even two of the three partners in the upgrade recently said, behind closed doors, that the design would not work or would actually "undermine" public transport - but then both signed up to carry on.

One of them, the Transport Agency Waka Kotahi, in May, told the Tauranga City Council the upgrade would not achieve the desired outcomes and it should take a breather, according to documents.

However, Waka Kotahi later said it backs the upgrade.

"The current design provides an improvement in public transport and walking and cycling access, which takes into account that the full benefits of the project will arise when the further stages of the project, all the way down Cameron Road and through to Tauriko, are completed," it says.

A second partner, the Bay of Plenty Regional Council, that runs the buses, went further, telling the city council in June the project "profoundly undermines" getting more people to use public transport.

The project's First Stage had won $45m from the government's Crown Infrastructure Partners (CIP) last year, in the push for shovel-ready infrastructure projects to buffer against Covid.

"We are very surprised that CIP appears to accept a project that does not appear to deliver any benefits'' for a shift to public transport, the regional council told the city council in June.

Anne Tolley who leads the city council, acknowledges this is a fundamental concern.

"Yes, of course it is, because they have the primary responsibility for public transport," Tolley told RNZ.

"Tauranga City Council, on the other hand, has to match that with the fact that we have four lanes of traffic now that come to a standstill at peak hours.

"To take one of those lanes out for a dedicated bus lane immediately wasn't in the original agreement that was signed with the Crown. We're working to that over the next 10 years."

The community groups, led by Sustainable BOP Trust's Glen Crowther, have written to the Transport Minister calling on him to back an independent review.

"What we need to do is change the design to make sure the buses actually run faster up and down the road rather than slower.

"Change the design so you won't have 14 sets of traffic lights."

Minister Wood has asked officials for more information but adds the bar for a review is "very high".

The city council says community support is paramount, but rejected a review - "No, we're not going to stop ... it's a hugely significant project," Tolley says.

After "intense discussions", all three partners were on board, she says.

The regional council's enthusiasm sounds muted: "The key issue from a public transport and safety perspective is that [the city council] will not revisit its decision on retaining two general traffic lanes," it said in a statement.

"This is a decision of TCC council and now all parties are to work within this decision."

Buses will run where cars park in lanes that for the first 10 years (or until certain trigger points are reached) are bus-only for six hours a day.

"It doesn't actually seem to get people out of cars at all."

As well as the four Commissioners - including Tolley - being imposed on it by government, the council recently had to overhaul its project planning after multi-million dollar fiascoes at the Bella Vista housing project and Harington St car park building.

The upgrade's stage two is meant to deliver the biggest public transport benefits, but remains a mystery to Green.

"The council are very loathe to show us a finished plan," he says.

Tolley says her council had to cater for an expected influx of 30,000 people on the central peninsula, and encouraging public transport could only achieve so much.

"If we're really good at getting people out of cars, and into buses, we might see a 10 per cent change.

"But the population is growing rapidly, too. So you know, we're up against it. And there are competing priorities."

Tauranga people only make two per cent of trips by public transport.

In addition to Crown funding, ratepayers are putting in about $13m - so far.

Crowther says the current total cost of $72 million equates to roughly $1300 per household, and the cost-benefit ratio was negative and falling.

The upgrade adds to the years of roadworks locals have faced, such as at another hugely expensive, very short (2km) upgrade, of SH2 from Baypark to Bayfair.

I have not sat and timed the lights to see if his claim stacks up, but, if it is true, there should certainly be action taken. Could it even be true? Has anyone else got evidence to support it?

If there were more exits from Cameron Rd to the toll road eg at 15th or 17th Ave, then there wouldn’t be so much traffic on Cameron Road. And having more traffic lights will simply push traffic onto Devonport Road! No- one will take buses as they don’t go where they are needed. A waste of money!

Why would someone want to cram into public transport when everywhere else we have to socially distance?

Excellent comment. Well said. Haven’t heard from you for some time. Your input has been missed.

congestion is on purpose

the TCC control the lights at cameron /15th Ave and during the week days at 3 pm they change the light sequence that causes the 2 lanes to clog up. The time avaliable for traffic going north/south (most of them at this time of the day) down to 6 seconds per light sequence.Immediate congestion! Why. So they can claim that there is congestion that they must deal with. Pollitics! It must be said that the real cause of congestion on Cameron road is really the bottle neck at the Hairini bridge.This problem has existed for years and nothing has been done and there is no intention to fix it!

Buses don't work for many

A least eighty percent of my trips are in my car and that won’t change as the buses don’t connect route wise or in a timely manner. Walking and carrying shopping isn’t possible to reach a bus stop and in all weather to boot. So say it’s avoid Tauranga central. Using Cameron is often unavoidable . So will no doubt sit in jams that happen any time car engine running worse if late afternoon is unavoidable. Mostly feel really bad for businesses on Cameron road where parking will be lost and access less. The idea of more traffic lights seems nuts as flow will stop all day long

This will blow out to $140 million by the way they are working most standing around looking at each other or on their phones,kids do not know what they are doing there and to block rd off outside lenz dairy and laundramat is stupid,and blocking left turn out of 13th ave is STUPID,my thoughts only on this matter,thankyou Sunlive 10-4 out.phew.

What are they Smoking

The upgrade aims to reduce car numbers by 10,000 a day? That’s 250 fully loaded buses. Thats one every 3 minites over 12 hours. Whose doing the numbers here? Another complete cock up. How do we get rid of these numbskulls. Based on their previous works at Greerton and 15th Ave, here comes another abortion.

tolly says this is what you are going to get. not what you want

This is quite simply a huge waste of millions of tax payers funds which does not add any value to anyone other than ticking a box for this woke under achieving government. Look at how the so called safety improvements to Greerton have created huge traffic jams, inefficiencies in time for people & increasing costs for businesses. It is only going to get worse if this project proceeds. The money could be better spent on projects to help traffic flow more freely like widening Turret Road Bridge, redesigning Greerton to allow traffic through, roundabout at Cambridge Road/SH29, Overpass at Barkes Corner, widening SH2 to Katikati the list goes on. We need people to stand up to the Council & Government and demand better use of tax payers funds in the same way the Auckland cycle bridge has now been canned due to public feedback.

"The city council says community support is paramount, but rejected a review - "No, we’re not going to stop ...". The mindset is obvious. Stuck in the last century. Key to it is getting people out of cars and that won’t happen while they stick to buffalo buses that run empty most of the time and are unwieldy on the existing roads. We should have a 21st century bus service with smaller eco-friendly buses and much more flexible access to them. Main routes can use bus stops, but secondary routes can pick up and let down passengers on request. The fact that they KNOW it is a stupid plan and continue anyway, says it all.

So - Council received a grant of $45m for this foolhardy exercise. The budget has already reached $70m and the work has hardly scratched the ground. Who is going to make up the shortfall at this point?? If work to date cost $70m then the whole sorry mess will add up to be in the $billions. Please use some commonsense and stop the project NOW !! You owe ratepayers a ’duty of care’. The plan has been laughable from the start. Now it is a crying sham

This is purely the governments agenda from the UN to force people out of cars and into public transport.