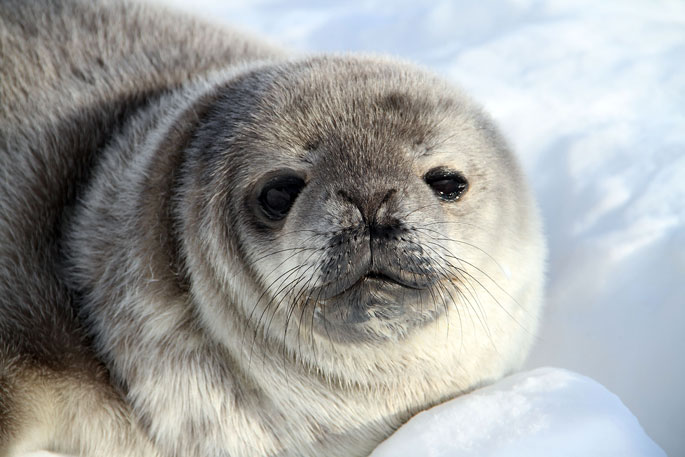 An international research team led by a University of Canterbury Antarctic scientist has completed the world’s first global population estimate of Weddell seals in Antarctica, showing that there are significantly fewer seals than previously thought.

Documenting the seals’ population trends over time will help scientists better understand the effects of climate change and commercial fishing.

The study is published in Science Advances, a peer-reviewed scientific journal by the American Association for the Advancement of Science (AAAS).

The researchers, along with more than 330,000 international volunteer citizen scientists, used hundreds of high-resolution satellite images covering huge areas of Antarctica to complete the count.

It is the first direct population estimate ever conducted for the global distribution of any wide-ranging wild animal species on Earth.

Their research estimates about 202,000 sub-adult and adult female Weddell seals in Antarctica. In November, when the satellite images were taken, male seals are mostly in the water under the ice guarding their territories, so they are not captured in the images.

Previous estimates of female seals were at about 800,000.

“That doesn’t necessarily mean there has been a big decrease of Weddell seals recently, but instead this is probably a more accurate count that we can use as a baseline to determine change over time,” says the lead author of the study, University of Canterbury scientist Dr Michelle LaRue, in the School of Earth and Environment.

“We’ve also developed an efficient process for monitoring them to see if the population has changed from this baseline. Tracking the population of seals against this benchmark is critical for conservation efforts.”

Weddell seals are one of Antarctica’s most iconic species. In addition to being undeniably charismatic, they live the farthest south out of any mammal in the world and can live up to 30 years in some of the harshest conditions on the planet.

They are seasonal occupants of the coastal sea ice that surrounds Antarctica.

By counting seals on satellite imagery, scientists hope to learn more about how climate change and fishing in Antarctic waters may be affecting the number of seals and the entire ecosystem over time.

“The reason Weddell seals are so important is because they're a key indicator species for the Southern Ocean,” says Dr LaRue, who is also a University of Minnesota research associate in the Department of Earth and Environmental Sciences.

“Weddell seals live on fast ice, which is the ice that's attached to the Antarctic continent - the same habitat as Emperor penguins. As the climate continues to change, we might expect that fast ice to change as well. So, if we understand where the seals are and how many there are, that gives us an idea of how the ecosystem might be changing.”

Dr LaRue says Weddell seals are also important because they prey on Antarctic Toothfish, which are fished commercially and end up on our plates as Chilean Sea Bass.

In addition to this first-ever count, the researchers gained new insights into the habitat of Weddell seals. The seals prefer to be near the continental shore but also near deep water – possibly because of the location of predators and the fish they eat. Perhaps most interestingly, the seals appear to prefer to be near Emperor penguins, but only if there aren’t too many of them.

“There seems to be a trade-off. It’s good to be near Emperor penguins but only if the penguin colony size doesn’t get too big and there is not too much competition for food.”

While Weddell seals are extremely important to the Southern Ocean ecosystem and have been studied since the early 1960s, no one has been able to do a comprehensive count of the seals due to the harsh Antarctic weather and remote locations in which the seals live.

Now researchers can use high-resolution satellite images to count the seals. However, the downside of that is there are too many images for scientists to handle alone. That’s why they turned to citizen scientists.

“There is absolutely no other way we could’ve done an accurate count of Weddell seals,” says Leo Salas, a co-author of the study and senior scientist at Point Blue Conservation Science.

“Even though our team includes seasoned researchers who know how to count seals on the images, it would have taken many years for our small team to search all the images. We also haven’t been able to use automated tools because the human eye is still more accurate than any computer algorithm.”

But that might change soon. With the help of citizen scientists, the researchers now have the data to train computers to help automate future counts that will give them more information about this important species.

In addition to knowledge on the ecology of the seals, the feat required a variety of skills. This includes new technologies to process and expose very large satellite images to the volunteers, project promotion to recruit volunteers, knowledge of the geophysics of sea ice formation along the coast of Antarctica, and advanced statistical methods. LaRue assembled team of researchers and engineers to make that possible.

In addition to Dr LaRue and Salas, the research team included Nadav Nur at Point Blue Conservation Science, David Ainley and Jean Pennycook at H. T. Harvey and Associates Ecological Consultants, Sharon Stammerjohn at the University of Colorado-Boulder, Melissa Dozier and Jon Saints at Maxar Technologeies, Kostas Stamatiou at Blue Sky Resources, Luke Barrington at Google, and Jay Rotella at Montana State University. The research was funded primarily by the US National Science Foundation in collaboration with Maxar Technologies and the Antarctic and Southern Ocean Coalition.

-To read the full research paper, ‘Insights from the first global population estimate of Weddell seals in Antarctica,’ visit the Science Advances website.