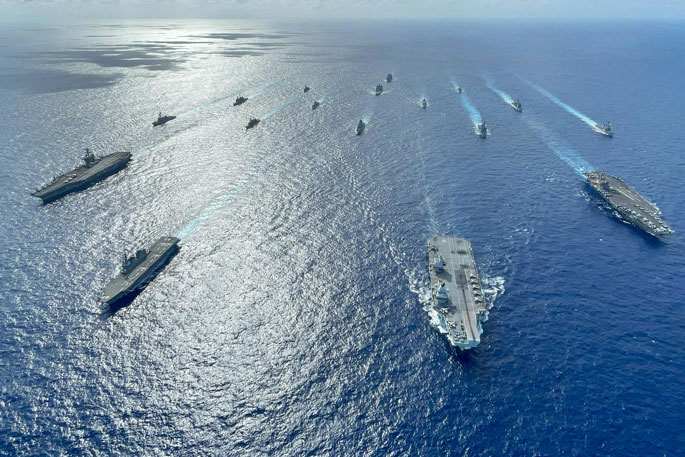 HMNZS Te Kaha, second from the right of the vessels at the rear, in company with ships from the UK, US, Canada, Netherlands, and Japan in the Philippines Sea. Supplied photos.

The New Zealand Defence Force last month announced its participation in Exercise Bersama Gold 21, and that it would interact with the United Kingdom’s Carrier Strike Group as it conducts engagement activities in the Indo-Pacific region.

While with the CSG in recent days, there have also been exercises and training with ships from Japan, the Netherlands, Canada, and the United States, including the US aircraft carriers USS Carl Vinson and USS Ronald Reagan, says a statement from the NZDF.

"HMNZS Te Kaha and the Navy’s replenishment tanker HMNZS Aotearoa, with a Seasprite helicopter on board, departed Auckland in September.

"HMNZS Aotearoa recently met up with HMS Queen Elizabeth, the Royal Navy’s flagship vessel in the CSG, as both ships conducted exercises off the coast of Guam." 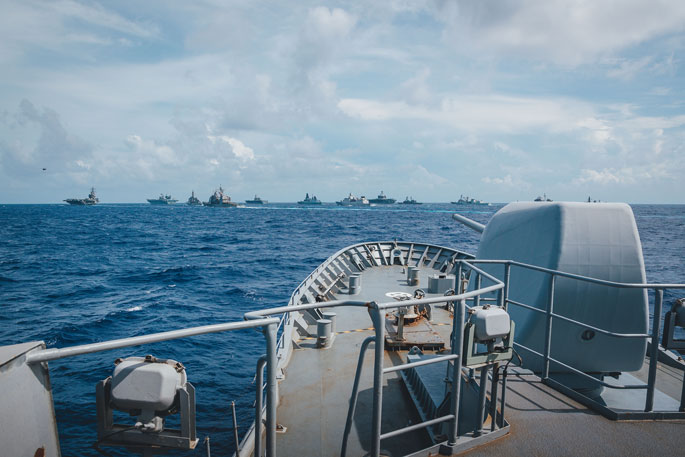 View from HMNZS Te Kaha as it exercises alongside ships from partner navies in the Philippines Sea.

Now it is HMNZS Te Kaha’s turn as the frigate enters the South China Sea and transits in company with the CSG and ships of other partner nations.

The NZDF has operated in the South East Asia region for decades as part of bilateral and regional defence engagement, and demonstrates its commitment to regional security through its presence in the region.

"The NZDF undertakes all activities in accordance with international law, and for ships in particular the United Nations Convention on the Law of the Sea.

"The South China Sea is one of the world’s major sea lanes and is routinely transited by merchant and naval vessels and aircraft.

"HMNZS Aotearoa is en route to Singapore for Bersama Gold 21, a major exercise marking the 50th anniversary of the Five Power Defence Arrangements (FPDA), which is being held off the coast of Singapore and the Malaysian Peninsula.

"The nations of the FPDA are Australia, United Kingdom, Singapore, Malaysia and New Zealand."

A Royal New Zealand Air Force P-3K2 Orion will join the exercise, and will also interact with the CSG.

After about a week with the CSG, HMNZS Te Kaha will head to Singapore to participate in Bersama Gold 21.

Exercises with international militaries are designed to enhance interoperability and strengthen relationships.

Another view from HMNZS Te Kaha as it exercises alongside ships from partner navies in the Philippines Sea.

Good that we are involved and forging friendships, but we should be able to do better with the state of that fo’csle...

The Chinese will be turning those bombers around now New Zealand is sending its tugboat.