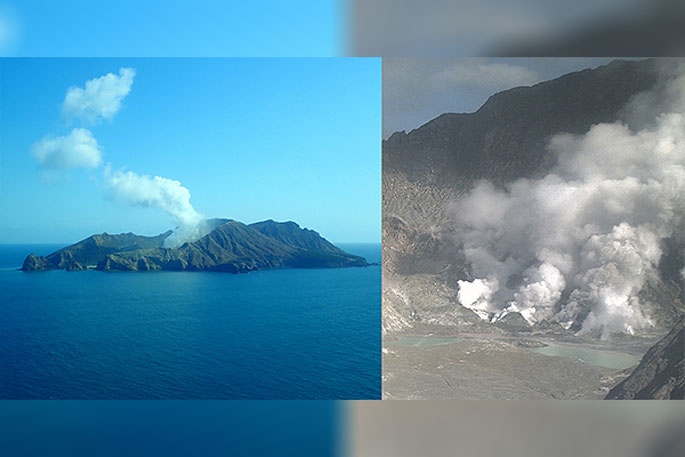 Whakaari/White Island photos taken during September 2021 show how ash can be seen at the active vents, but it's not visible in the plume above the island. Photo: GeoNet.

Whakaari/White Island has been emitting ash intermittently for several weeks and some people may have been questioning what that means.

GeoNet volcano information specialist Brad Scott wants to explain what is currently happening at the volcano.

Over the past few weeks, Whakaari/White Island has gone through an active phase with increased gas emission and minor volcanic earthquakes, says Scott.

“Does this ash mean the volcano is erupting? No – and here’s the science behind that answer.”

Volcanic ash is a mixture of rock, mineral, and volcanic glass particles smaller than 2mm across.

Scott says the small particles are relatively light which allows ash to be easily transported (often in plumes) many tens-to-hundreds of kilometres downwind of a volcano.

When large volumes of ash are produced, it can create ashfall hazards.

Volcanic ash is typically formed when gas bubbles burst within rising magma. Once the strength of the magma is exceeded by the pressure of the expanding gas, the force shatters the magma into fine particles and propels them into the atmosphere.

“Ash is also produced when magma encounters water. The water rapidly heats and turns to steam, and it’s this rapid expansion of water to steam that explosively breaks apart the magma or the surrounding rocks into fine pieces.

“The ash we are currently seeing at Whakaari/White Island, however, isn’t a result of either of these processes but from a volcanic process called hydrothermal alteration.

“This is when rock is softened by the percolation of acid gases and water through it. This is happening at the active vent, where we’ve observed high energy emissions of hot gas which is slowly eroding the vent walls.”

Scott says this eroded rock material (small volumes of ash) is carried in the steam and gas plume from the active crater.

“So, these ash grains are slowly reworked material, not fragmented parts of the magma coming from depth or the surrounding rocks.”

Scott says minor ash emissions are common at Whakaari/White Island and at many other active volcanoes.

“Our volcano monitoring team has assessed this activity to be consistent with elevated volcanic unrest. As the ash emission is intermittent, minor and lacking the explosiveness of a volcanic eruption, it does not take us across the boundary from Volcanic Alert Level 2 to Level 3 (which is a minor eruption).

“Throughout this activity period we’ve issued updates in the Volcanic Alert Bulletins, and we will continue to give updates in future.”

At the moment, Whakaari/White Island’s Volcanic Alert Level remains at Level 2 and the Aviation Colour Code remains at ‘Yellow’.

The Volcanic Alert Level reflects the current level of volcanic unrest or activity and is not a forecast of future activity, says Scott.

“Eruptions can still occur with little or no warning.”