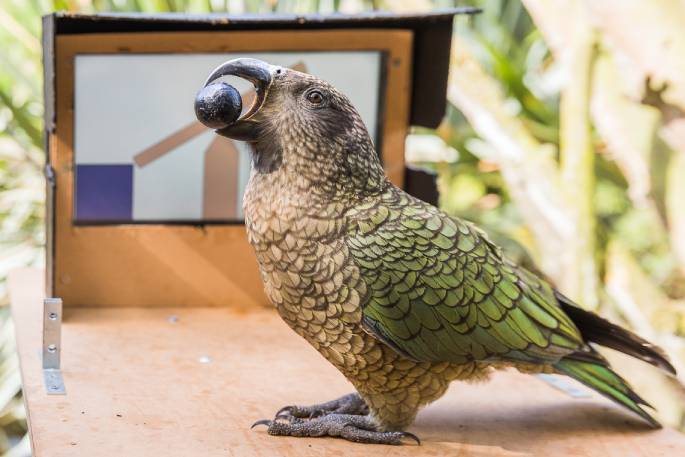 Kea parrots treat virtual and real-world environments as continuous and equivalent, a new study by the University of Auckland published in Biology Letters shows.

To achieve this, researchers trained a group of kea at Willowbank Wildlife Reserve to operate a touchscreen laptop with their tongues, then presented them with a series of tasks that took place either fully in the real world, fully on-screen, or with a mixture of both.

These findings are in contrast to those of a recent study, which found 19-month-old human infants did not expect the real and virtual worlds to interact and therefore did not expect a virtual see-saw to deposit a virtual ball into one of two real boxes.

Unlike babies aged 19 months or older, kea expect virtual events to be equivalent and continuous with those in the real world.

Lead author on the paper Amalia Bastos says these findings open new possibilities for scientific investigations into kea behaviour and intelligence that could rely on this technology.

“Our study validates the use of virtual reality and tasks blending the real and virtual worlds for use with this species. This potentially has implications for other parrot species as well,” she says.

“However, further work is needed to determine whether kea with extensive experience of screens might begin to dissociate the real and virtual worlds, and what types of experiences might shift their understanding of screens closer to that of human infants.”

Patrick Wood, also an author on the study, says training the birds to operate touchscreens was an interesting challenge.

“A parrot’s beak is a lot like your fingernail: it won’t activate a touchscreen. So, we had to teach them to lick the screen with their tongues. Once they acquired this skill, they quickly gained confidence using the touchscreens and they really seem to enjoy it, too,” he says.

First, the kea observed a real ball placed onto a seesaw, which tilted so the ball would roll into one of two real boxes. They correctly indicated which box they thought the ball was in by touching it with their beaks. They then correctly performed the same task when all elements were replaced with virtual ones on a screen.

To test whether they expected physical events taking place in a virtual environment to be continuous with the real world, they were presented with a version of the task which had the same virtual animation of the seesaw as before, but it now appeared to deposit the ball into one of two real boxes placed in front of the screen.

Kea continued to select the box the ball was seemingly deposited into, which suggests they expected events on-screen to continue into the real world.

The researchers also presented the parrots with an additional experiment which pitted real and virtual objects against each other. This confirmed their findings were not due to simpler explanations, such as selecting the box tokens moved closest to, and that the birds showed no preference between real and virtual objects when they were directly compared against each other.