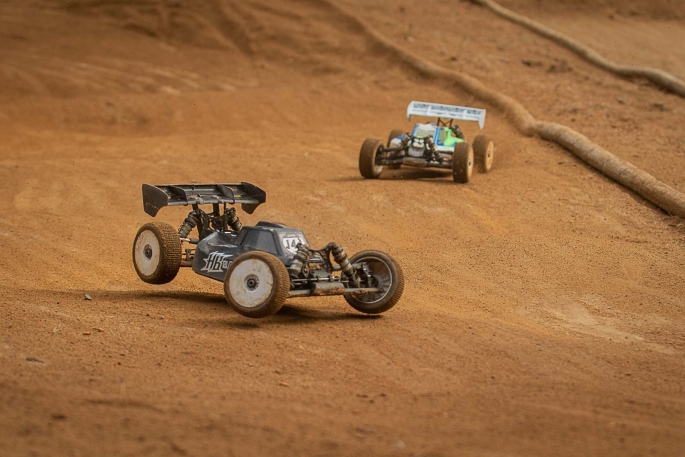 The Bay of Plenty Outdoor Radio Control Car Club is about to be featured on the big screen on TVNZ tonight at 8pm.

The club which races off road 1/5 scale 4wd, 2wd and 1/8 Nitro, Electric radio control cars at TECT Park in Ngawaro have attracted that of New Zealand’s infamous comedy duo.

The Jono and Ben: Good Sports TV show reached out to the BPORCCC three months ago as a part of their hunt for Aotearoa’s most unique sports.

Club Captain Mikkie Strong says he got a phone call from the show’s producer out of the blue three months ago.

“It’s a great achievement in regards to what the club can do.

“It’s a small sport that’s now growing considerably in all areas and I think we have quite a lot to do with that here in the Bay of Plenty.

“Having Jono and Ben take part in this is just the icing on the cake.”

A group of volunteers including Mikkie decided to get to work and start from fresh.

“The club was almost going under but I could see the potential it had in comparison to other clubs in Auckland and the likes.

“I spent a decent amount of my own time chopping everything down, getting the track useable again, travelling to other clubs to compete and get the word around that our track was reopen.”

The club now has over 50 members and hold open days race days and fun days frequently.

Jono and Ben headed to the club on the BOP open day with other interested members of the public where they had a go at the sport themselves.

“There was quite a lot of people there on the day for them to talk to, interview and compete with,” says Mikkie.

“They were all very down to earth people.

“There were four or five film crew, sound crew, agents and obviously Jono and Ben themselves.

“What you see on TV or hear on the radio is exactly what the pair are like. They’re very funny and just a bunch of jokers.

“They do however take things very seriously, there was a lot of competition between the two of them.”

To see what the Bay of Plenty Outdoor Radio Control Car Club is all about tune into TVNZ tonight at 8pm or head to the club’s Facebook page: www.facebook.com/groups/169392576501838/about