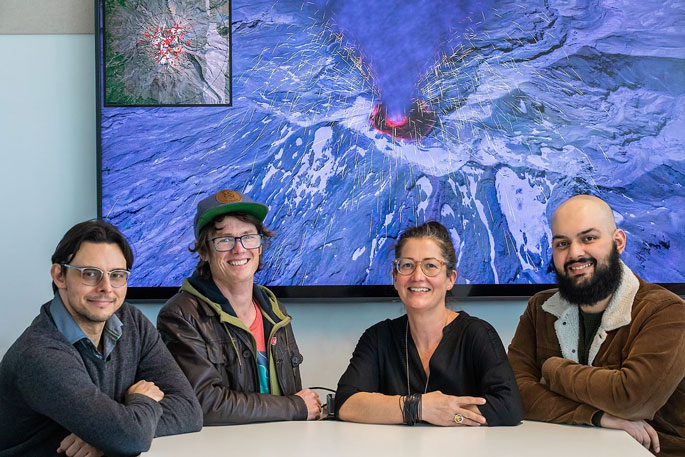 University of Canterbury researchers are exploring using applied games and VR to educate people about the risks of natural disasters.

In a unique collaboration, researchers from the University of Canterbury are creating games as a tool to educate about the dangers of earthquakes, volcanic eruptions, floods and tsunamis - and what to do when they happen.

University of Canterbury Professor of Physical Volcanology Ben Kennedy says New Zealand, along with many other countries, faces a growing risk from environmental and natural disasters.

“Many people live and work in areas that are vulnerable to natural hazards.

“We hope to use applied game design and immersive technology, such as virtual reality (VR), to communicate these risks to the wider community and help people understand and prepare for natural disasters.”

He says gaming is increasingly being used as a teaching tool because it’s accessible and engaging, particularly for young people, and it bridges different cultures.

“Perhaps in the future we can imagine a scenario where playing a game could help someone know what to do during a natural disaster. Kind of like a movie where the kid who is good at computer games saves the day.”

Professor Kennedy, in the School of Earth and Environment, is collaborating with Associate Professor Heide Lukosch, of the Human Interface Technology Laboratory (HITLab), and Dr Simon Hoermann, from the School of Product Design in a new research group called Learning for Earth Ako Futures (LEAF) which aims to find new ways to educate people about natural hazards.

“A crucial part of the collaboration is harnessing what we know about how students learn in order to create engaging and effective educational games,” Professor Kennedy says.

The initiative is gaining momentum as the three researchers have recently received a Ministry of Business, Innovation and Employment (MBIE) Endeavour Grant under the lead of GNS Science as part of the “Beneath the Waves” research programme.

This project aims to assess risks from volcanic island hazards to support response and forecasting in the future.

Applied games will be used to illustrate the risks of volcano hazards including tsunamis, ash fall and pyroclastic flows on the east coast of New Zealand.

“We’re using innovative methods to communicate the results of our scientific work to an audience that traditionally would be hard to reach”.

The University of Canterbury trio of researchers have already worked together on an educational game which was incorporated into Professor Kennedy’s Massive Open Online Course, “Exploring Volcanoes and their Hazards”, which had more than 900 users, here and overseas, in its first year.

In the game, students get to choose a path for a blob of magma named Rua through the Earth’s crust, learning about magma experiments and volcanic hazards along the way. It’s designed to illustrate how understanding the processes beneath the Earth can help predict the style of volcanic eruptions.

University of Canterbury Master of Human Interface Technology (MHIT) student Amir Pourgolmohammadgolshani is working on another gaming project developing interactive and authentic visualisations of volcano eruption scenarios on Mt Ruapehu for a range of different users, from Department of Conservation staff to university students.

“An exciting part of this project for me is that I get to use my skills to develop a tool that will help everyone,” Pourgolmohammadgolshani says.

The spectacular visualisations that Pourgolmohammadgolshani has created are based on realistic hazard models and scenarios that will be vetted by research scientists who work on Mt Ruapehu. The game aims to help users better understand the probability and areas of impact that volcanic hazards can have on Mt Ruapehu.

Associate Professor Lukosch is working with another MHIT student, Helen Treffer, on a VR game to illustrate the risks of earthquakes in a household environment.

This game aims to raise awareness of the need for disaster preparation at home.

Together with University of Canterbury international PhD student, Misha Mirza, Associate Professor Lukosch is also exploring the use of augmented reality (AR) to help communicate the risks of natural disasters such as flooding and earthquakes.

There are many game-based applications in the disaster risk-management field,” Associate Professor Lukosch says.

“However, we are using immersive technologies in new ways to reach every part of our community across cultural and language borders. We think this is exciting and world-leading research.”