Pool to be returned to former glory 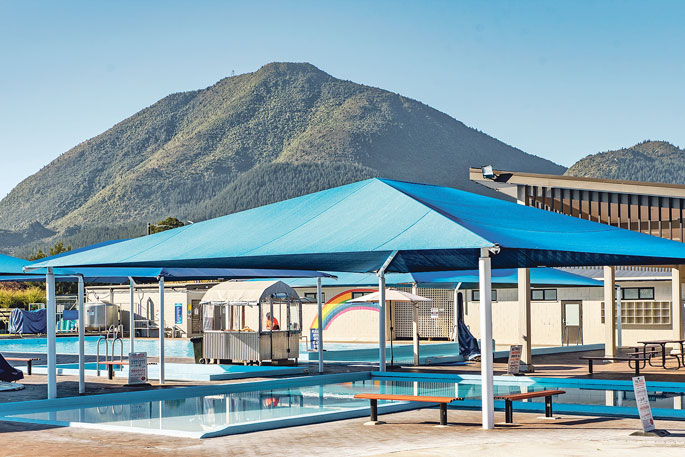 Kawerau's “jewel in the crown”, its free and geothermally heated pool, is expected to be steaming hot again soon, thanks to a council decision to drill a new well.

After this year’s failure of the original well, installed in 1970, that feeds steam to the Maurie Kjar Swimming Pool Complex, Kawerau District Council, which manages the pool, had four options at a full council meeting yesterday.

Mayor Malcolm Campbell says there's really only one option as far as he's concerned, particularly in consideration of the fact that they were already investing $425,000 with an additional $500,000 of external funding in the upgrading of the pool.

“Let’s spend the money and get the job done properly,” he says.

Campbell says he's learned the usual life of a bore was around 25 years.

The Maurie Kjar Swimming Pool Complex in the centre of town is heated by steam from a well drilled into the geological area next to the Ron Hardie Recreation Centre.

The well that extracts the steam started to show signs of deterioration in 2015, resulting in lower volumes of steam.

By June this year, the steam was insufficient to heat the main pool and only the spa pool remained operational.

An evaluation of the well by Ngāti Tūwharetoa Geothermal Assets geophysicists showed that the original pipe had likely started to fail, causing blockages.

Rotorua Welldrilling, which drilled the original well, was called in to investigate options to repair or replace the well.

The option it offered of relining the existing well, while cheaper, would have made the pipe narrower, reducing steam production by 30 per cent, potentially causing the pool to be closed in very cold weather, carried some risk of failure and gave the well an expected life of 10 years.

The new well could be drilled close enough to the existing well to allow the above-ground infrastructure to be used again and would have an expected operating life of 25 years.

The drilling company said this was dependent on the geology and fluid composition but considering the more than 50-year lifespan of the current well, this was considered to be a reasonable expectation.

Councillors agreed unanimously to the drilling of a new well, which is expected to take place as soon as resource consent can be obtained.

Councillor David Sparks says it would be “false economy” to choose any other action.

“This is the jewel in our crown and we need to restore it to its former glory.