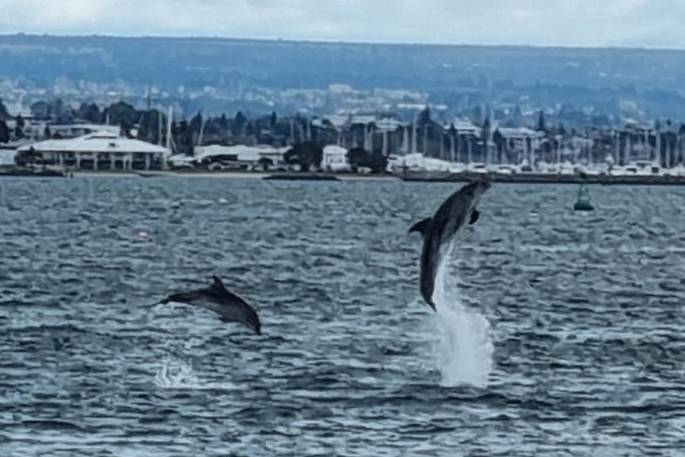 The dolphins were spotted breaching the water in Pilot Bay.Photo. Leanna Dorothy.

A pod of dolphins have been putting on a show for lucky bystanders at Pilot Bay this week.

The cetaceans were seen hopping out of the water on Tuesday and one local even managed to catch it on camera.

Leanna Dorothy is over the moon to have experienced the dolphins enjoying a skip in the sea.

“It's my first time seeing dolphins up close,” she says.

“It was an honor to watch them casually frolicking at Pilot Bay.”

Dolphins are known to be frequent visitors to Pilot Bay and the wider Tauranga area.

A number of dolphin species can be found in New Zealand waters including Bottlenose, Māui and Hector’s.

The dolphins are not the only marine animals who have been putting on a show around the region recently. 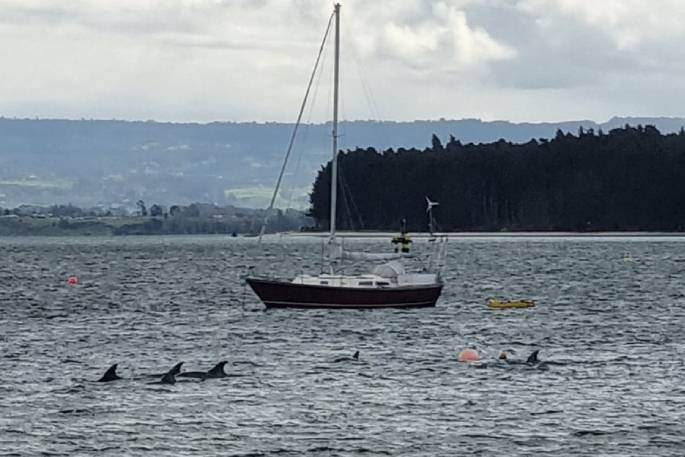 A pod of orca have been entertaining beachgoers and mariners in Mount Maunganui over the weekend.

Around 5pm on Sunday, Steve Morris, from the Seamen Ocean Swim Squad, received a message from a friend saying Orca were swimming along the shore by Rabbit Island heading towards The Mount.

“I drove to Leisure Island with my girlfriend and we saw them very close to the beach in ‘Shark Alley’,” Steve told SunLive.

“They headed around Leisure Island and we got another good look at them there before they swam towards The Mount.

“We decided to try our luck and drive to Pilot Bay and walk around The Mount from there hoping to spot them coming in the other direction. We did and that is when I took the videos. It was on the sand by the Maori Warrior.”

The Department of Conservation advises that wherever you encounter marine mammals you must protect them from stress or displacement.

Keep marine mammals and their young safe by following the right rules for the environment and species. This will make sure you and the animals have an enjoyable experience.

If you're travelling at sea near marine mammals:

All seals, sea lions, dolphins and whales are protected under the Marine Mammals Protection Act 1978. It’s an offence to harass, disturb, injure or kill marine mammals.

Anyone charged with harassing, disturbing, injuring or killing a marine mammal faces a maximum penalty of two years imprisonment or a fine to a maximum of $250,000.

Awesome picture. A once in a lifetime shot. Well done Leanna and thank you for sharing it.

What a great shot you have captured there. Well done