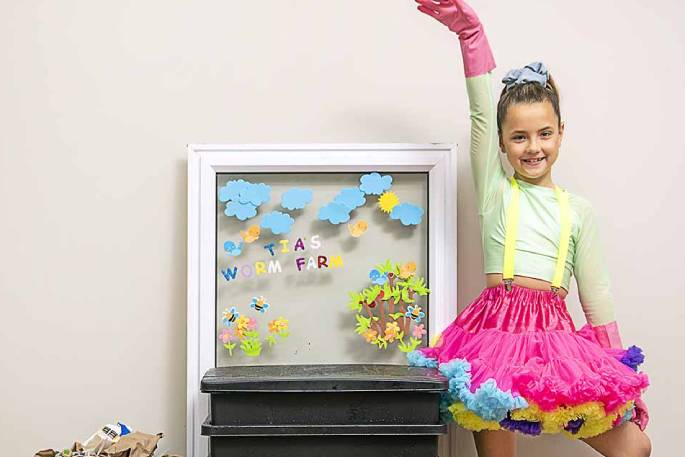 The sight of eight-year-old Tia Beale - brightly dressed in her dance costumes, collecting rubbish in Douglas Street, Whakatane, and the surrounding area - became familiar to many people during August lockdown.

Tia become something of a Facebook hero during lockdown with people in her neighbourhood delighted with her industriousness in cleaning up their neighbourhood posting photos of her on social media, with Tia’s parents’ permission.

Mrs Kearney managed to get a message to Tia’s mother, Rochelle Beale, congratulating her on having such a waste-conscious daughter.

"Tia had done such a great job that she had earned a worm farm so she can continue her crusade, learn about other waste people can stop sending to landfill and turn the family’ food waste into liquid gold fertiliser,” Mrs Kearney said.

Mrs Beale said she was very proud of Tia. She had always taught her children not to litter and do their part to keep our district clean. She said Tia was also a “crafty young lady” who was always recycling items into other creations.

She said the clean-up was all her daughter’s idea. Tia would go out walking with her Nana, who lives with the family so was in their bubble, to get some exercise.

“The first time she went, she was like, ‘it’s dirty,’ she was seeing beer bottles and was like, ‘that’s really gross; it’s polluting the environment’. So, she kept saying to her Nana, ‘can we go for another walk and take a bag?’ Then every day she was like, ‘can we get more, can we go’? Some days we went around with a little wagon. She would say, ‘I don’t want it to blow in the ocean and kill all the turtles.’ By the end of lockdown, our area had way less rubbish.

As business owners, Tia’s parents put it with their own rubbish and took it to the dump themselves. We put whatever we could in the recycling, but a lot of it, because it had been in the middle of the road, it’s contaminated stuff anyway, that they won’t recycle.

At first Tia was wearing just ordinary clothing but as a dancer, Tia developed a couple of rubbish collecting outfits, as seen pictured, so people began noticing what she was doing. She appeared on the Whakatane Matters Facebook page doing her good deed, which got over 300 likes and lots of wonderful, positive comments.

Tia has also earned a certificate from her school, St Joseph’s Whakatane, and people in the neighbourhood were giving her items such as hand-made soaps along the way.

Mrs Beale said although Tia was now back at school, she was still keen to continue her rubbish collecting.

“She’s just a really nice kid. She’s always been like that. She’s keen to help other people and will always give to other people before herself.”