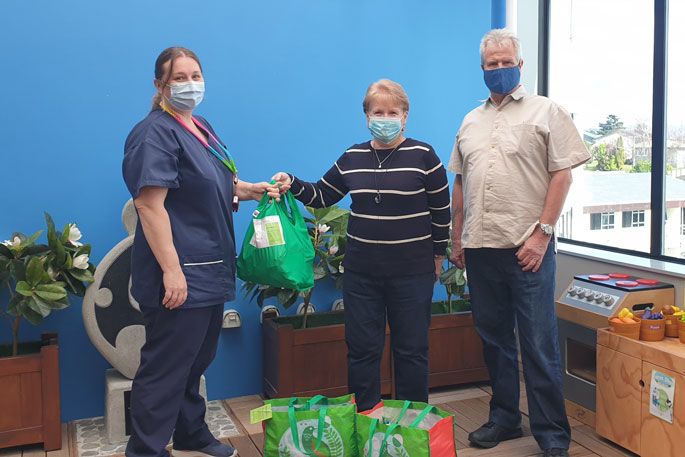 For the thousands of patients that come through Tauranga Hospital’s doors each year, there’s a story that usually involves accidents, illness, and a whole lot of care from dedicated doctors and nurses.

But care is also found in the form of a small but devoted charity that works to make sure every patient can be comfortable during their stay – a stay that is typically unforeseen and can last longer than expected.

Run by the P.E.T Charitable Trust, Care Packs for Patients sees Chris Bishell and a team of helpers put together care packs for those that don’t have access to their own toiletries.

Each pack contains small sizes of items everyone might need for a short stay in hospital, including a pen, toothbrush, toothpaste, shampoo and conditioner, deodorant, soap and a comb.

Chris Bishell says she started the charity back in 2008 when her husband, a paramedic, told her about his day, and an elderly lady who was rushing to get her things together before being taken away in the ambulance.

“She was dying and needed to get in straight away, but she was taking so long to get her favourite comb and cake of soap. I said it’s a shame you don’t have something you could give them, and he said we are lifesavers, not a charity.

“But I thought it was still a good idea, and he said if you want to make some, you can take them to the Emergency Department and they can dish them out.

“So, I got out my sewing machine to sew together some little bags. You always have stuff in your cupboard from when you’ve been to a motel, so I gathered those, bought some combs, went to local dentists and asked for some toothbrushes and toothpaste and put them all together.”

Chris made a dozen care packs and took them into the Emergency Department. Three days later, they were on the phone to Chris asking for more, which she swiftly got to work making.

Thirteen years later, Care Packs for Patients has produced over 21,000 packs which have been given out by hospital staff to patients in need at Tauranga Hospital and at Waipuna Hospice.

Chris says the packs, which are free to patients, can make a big difference to their stay.

“The packs are so valued by patients – those little things can make such a huge difference, just being able to brush your teeth and have a shower, feeling fresh after a long and stressful night.

“While it is impacting thousands of people, unfortunately, not many people know where they are coming from. People often think they are provided by the hospital without knowing just how much community effort has gone into producing them.

“But for me, it’s a buzz, and such a feel-good factor I get out of it – especially doing things anonymously. I don’t take praise easily. We might not get acknowledgement for everything we do but knowing it’s needed and appreciated is thanks in itself.”

Chris, who works full time, volunteers her time along with her husband sourcing the products to go in the bags, putting the packs together, and dropping them off at all the hospital wards.

Producing around 2000 packs a year, she no longer sews each individual bag but purchases waterproof zip-up bags from different sources.

Help comes in the form of various neighbours, friends, and family members putting packs together, storing packs, and dropping them off to the hospital. Toiletry items are also donated by the public.

Chris also receives support from organisations such as EVES Realty, who donate hotel toiletries saved from business trips, and members of the Papamoa Freedom Village who put packs together. 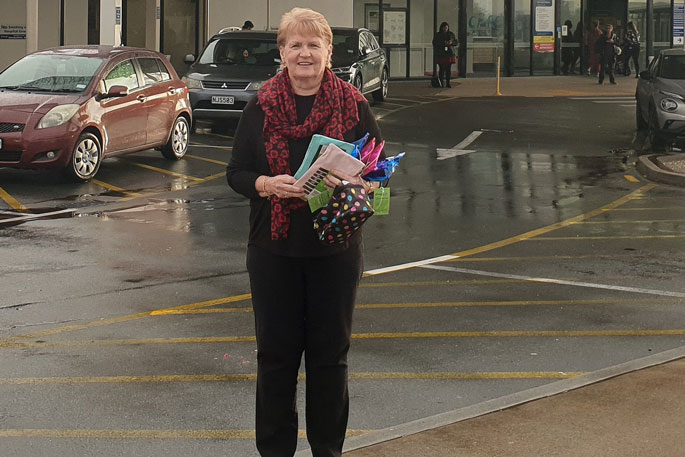 Staff Nurse Brenda Murrell works in the Children’s Ward and receives around 40 packs a month for children, teenagers and their parents.

“It can often be someone who has been in an accident or has come in acutely, like with a respiratory illness, and has been sitting in ED for hours and then transferred to the ward. It’s too late for anyone to bring them any supplies, and they don’t have anything with them until the following day. It’s a nice way for them to refresh themselves and feel a bit more comfortable.

“This impacts on them greatly as when the child comes in with a respiratory illness they have been unwell for a number of days, they are usually deprived of sleep, and all they need is a reboot by having a hot shower, washing their hair and brushing their teeth to feel they are able to function again.”

Denise Park is the ICU/CCU Ward clerk. She receives around 100 packs a month from Chris for Intensive Care and Coronary Care patients.

She says the care packs are important for the patients and sometimes a family member.

“Often they come into the hospital urgently and unprepared, and it makes such a difference for them to be able to freshen up. The care packs are exactly what they need to get them through until they can get their own personnel items.

“When the packs are delivered, it is a relief as I know how important they are for the patients and families. Chris is always so prompt at delivering them, and it is never a problem to her.”

TECT has funded the P.E.T Charitable Trust for the past six years with over $20,000 in funding to put the packs together.

Chris says the $5000 that was approved this year is supporting 50 per cent of their costs.

“Without TECT, we could not exist – we would be scrambling. We also appreciate TECT’s acknowledgement of how important this is for our community through their grants functions and various trustee comments.

“All the money goes into the care packs, every cent has to be accountable as we are a charitable trust, and this is all done voluntarily.

“Demand has increased a lot over the years, with the rising population of Tauranga and knowing how busy the Emergency Department is. So, knowing we have TECT’s support to help us meet this demand is fantastic.”

Recently the charity lost one of its other long-term funders, which has cut their funding in half. Chris says she and her husband have put in $5,000 of their own money this year to keep the charity going.

“We’re doing that because it is so needed. We take around 100 to the hospital each week. As long as it is needed, we’ll keep it going, but there is a limit to how much money we can personally put in.”

But that hasn’t stopped Chris from having big goals for the charity.

“My dream would be to inspire others to do it in their area. A lot of people say, ‘what’s in it for you?’ and I just say it’s the feel-good factor, like anybody else that volunteers. To see it grow and be needed is thanks enough.”

While the charity saw a decrease in demand for the care packs during lockdown due to the hospital being quiet, Chris and her husband were able to use the time in lockdown to make up 500 care packs to have in reserve.

If you are interested in donating toiletries, time, or money to help fund the purchase of bags and products, visit https://carepackforpatients.org.nz/helping-us/.