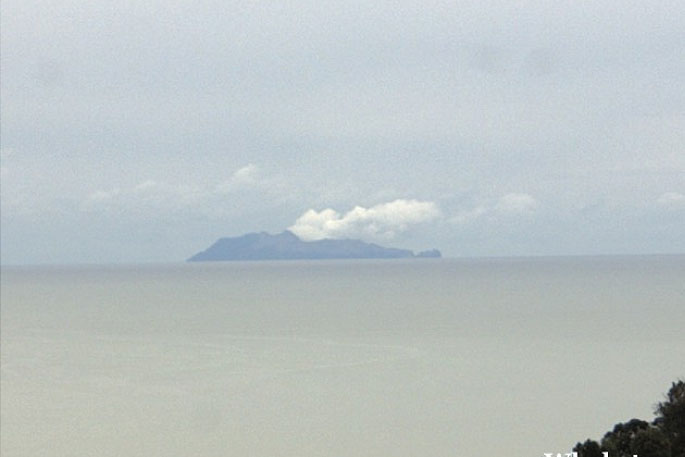 White Island as seen from the shore at 7.50am today. Photo: GeoNet.

Volcanologists are reporting a "sharp decline in vent temperatures" on White Island.

"The volcano is still in a state of moderate to heightened unrest and the Volcanic Alert Level remains at Level 2.

"Last week, GNS scientists undertook a gas emission measurement flight, along with visual observations and temperature measurements from a helicopter."

The gas measurements showed emissions of Sulphur Dioxide (SO2) have increased to 680 tonnes per day from 450 tonnes per day in mid-August, a continuation of an increasing emission rate trend over the last few months.

Temperatures measured in the active vent area have decreased from 650 °C seen in July and August, to maximum 189 °C in the measurements last week, says Craig.

"The minor deposits from the intermittent ash emission described in previous bulletins were visible but were confined to the area close to the active vents.

"No ash emission was occurring during the observations made last week, however weak, intermittent ash emission is still possible.

Craig says ground subsidence continues around the active vents, as measured by satellite remote sensing techniques, similar to the pattern of the last few months.

He says the drop in temperatures around the vent area is interpreted to reflect the infiltration of cooler ground and geothermal water into the active vent area, caused by decreasing gas pressure around the small volume of magma (molten rock) we believed intruded earlier in the year beneath the active vents.

"Rising Sulphur Dioxide (SO2) gas emissions, however, may reflect a continued input of magma deeper into the system, into an area not affected by cooling from groundwater.

"The current level of activity is consistent with moderate to heightened levels of unrest. As such the Volcanic Alert Level remains at 2 and the Aviation Colour Code remains at Yellow.

"Equipment that provides real-time monitoring on the island is currently degraded and we are continuing to work on restoration options."

Craig says the Volcanic Alert Level reflects the current level of volcanic unrest or activity and is not a forecast of future activity.

"While Volcanic Alert Level 2 is mostly associated with volcanic unrest hazards (including discharge of steam and hot volcanic gases, earthquakes, landslides, and hydrothermal activity), potential for eruption hazards also exists and eruptions can still occur with little or no warning.