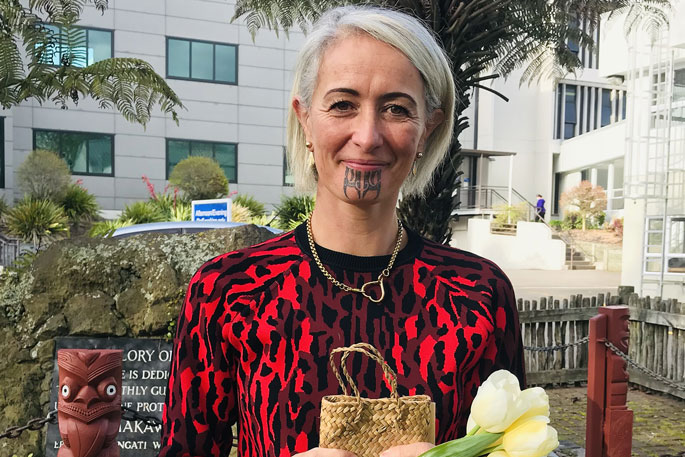 She left school at 16 and had four children before choosing to try for medical school, now Rotorua Hospital’s Dr Tawa Hunter has been recognised as New Zealand’s Junior Doctor of the Year.

Staff at Rotorua Hospital honoured her achievement with a haka and presentationon Monday.

The award is under the jurisdiction of the New Zealand Medical Council and Dr Hunter will now be considered alongside the Australian winners for the overall prize in a virtual ceremony next month.

The 45-year-old said her path to becoming a doctor wasn’t easy but it was one she hoped other people – particularly Māori mothers - could aspire to follow.

“When I figured out I could have a job where I was paid to look after people all day; that sounded pretty good to me.

“I hadn’t factored in all the hours of study and brain power. I left school at 16 and didn’t have any academic stuff behind me.

“I was quite naïve and ignorant of the process but I could see what this would give me the opportunity to do.

“When I got to university I was with a group of young, really smart people.

“There was this moment where I did badly in a maths test and thought ‘who are you kidding Tawa. Here you are without a clue about what’s going on’.

“I had this internal dialogue and said to myself that the only difference between me and them was they have more information than me.

“So I worked my tail off. If there was something I didn’t understand I would ask. I topped the class that year.”

Tawa was 36 and a jewellery designer when she embarked on this career change. She gave birth to her fifth child while in the middle of her third year of medical school and took a year out from study. Overall it took her eight years to earn her degree.

She said her children and family were her biggest supporters throughout her study.

“People say you have to be brainy and smart to be a doctor, but you can do anything you want in your life. All you need to do is keep working towards your goal.

“We hold ourselves back so much in life. I’ve not always believed in myself but I’ve kept doing it anyway.

“The support I’ve received has been amazing; I know I can ask any of the doctors here for help and they will give it.

“I’m proud now to be in a position where I can represent Māori women, especially those who are mums, and let them know not to give up on their dreams.”

just goes to show what determination and opportunity can achieve. Take your experience Dr Tawa and inspire as many young mothers as you can, the world will be a better place for it. Again congratulations.