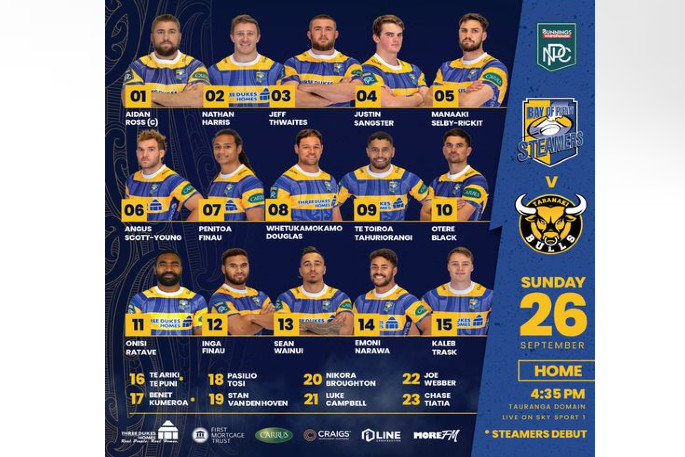 The Bay of Plenty Steamers will play for the Peter Burke Trophy this Sunday as current holders and Championship leaders Taranaki come up to play at the Tauranga Domain.

Peter Standish Burke (1927-2017) was a former All Black player and coach and an immortal of New Zealand rugby. Burke played for both the Bay of Plenty and Taranaki and has strong ties to both provinces.

Taranaki is one of the competition's in-form teams, having won three from three games including a 32-26 win over Wellington last weekend.

The Steamers, meanwhile, will still be feeling the after-effects of their devastating Shield loss last Sunday after Hawkes Bay kicked a penalty goal to win in extra time.

"Yes, the boys are extremely disappointed about the weekend's result, and we have reflected in-depth on what we can do to be better going forward.”

"They're a resilient bunch, and I have full confidence that the boys will use last weekend as added motivation to put a strong performance on the park v Taranaki and take back the Burke Trophy."

If recent results are anything to go by, the game is forecast to be a high scoring affair with some mouth-watering head-to-head matchups to boot.

Flying Fijian Onesi Ratave chalked in another scintillating performance last weekend, showing impressive speed and strength to score twice, including a try that put the Steamers up 33-30 in the dying minutes of the game.

He will share the same jersey no. as Taranaki number 11 Kini Naholo, the younger brother of prominent former All Black Waisaki Naholo and is on all accounts just as electrifying with ball in hand.

"We have done our homework on Taranaki. There's a reason they are 3-3 wins this season," says Steamers Forwards Coach Tanerau Latimer.

"They are a well-drilled side equipped with a good set-piece and are effective around the breakdown. It will be a cracking game of code, and I have full confidence in our boys to get the job done."

Former Bay of Plenty Under 19 captain Benet Kumeroa is set to make his debut for the Steamers off the bench as well as Te Ariki Te Puni who has been called into the team to cover Kurt Eklund for majority of the season, and Nathan Vella who sustained an injury in the game against Hawkes Bay.

The game is scheduled for a 4.35pm kick-off on Sunday September 26 and will be broadcast live on Sky Sport 2.

The match will be played under strict level 2 restrictions which means there will be no general admission sales and no crowds. Six bubbles of 100 have been created to permit limited hospitality hosting, curtain-raiser whanau & Steamers whanau.

In other news, the curtain raiser will be an exciting display of Bay of Plenty’s best young female players as the Farmlands Girls XV lines up against the Farmlands Girls XV kicking of at 2.00pm. These are two selection teams made up of players who took part in this year’s Toi Ohomai Secondary Schools competition.

All players participate in a weekend camp that includes mentoring from Black Ferns, Kendra Reynolds and Alena Saili. Gerry Paul, one of the first BOP players to represent the Black Ferns, will also attend the camp and share some insights from her playing career.

Paul is currently the NZ Maori U18 Girls Coach and is moving back to Bay of Plenty, where she hopes to develop more female teams in the Eastern Bay.

Best wishes to the team, especially the newbies...