Mainly rain in the south and sunny in the north 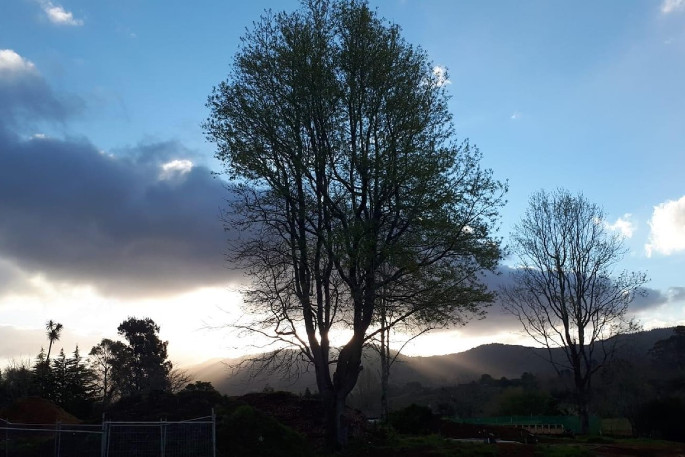 Sunrays pouring down through the clouds in Katikati. Photo: Craig Everett.

WeatherWatch advise that a front is pushing northwards over the South Island today bringing heavy rain in the west, and strong northwesterlies in the east with gusts to gale force.

A cold front, preceded by a strong and moist northwest flow, is moving across the South Island today and onto the lower North Island tonight.

The North Island has a mild northwesterly airflow and is forecast to be mainly dry today.

Northland, Auckland, Waikato & Bay Of Plenty
A mix of sun and cloud, southwesterlies tend to the northwest in the afternoon.
Highs: 17-20

Western North Island (including Central North Island)
A mix of sun and cloud, a few showers moving in later in the evening. Northwesterly winds, blustery about Kapiti.
Highs: 15-19

Wellington
Cloudy areas with a few showers later in the evening, northwesterlies strengthen rising to gale from afternoon.
Highs: 14-16

Marlborough & Nelson
Mostly sunny with north to northwesterly winds strengthening, gusting to gale force at times from afternoon for Marlborough. Some rain spreads into Nelson later in the afternoon from the west, a few spits reaching Marlborough in the evening.
Highs: 17-19

Canterbury
Sunny areas and some high cloud with northwesterlies strengthening, gales possible in the afternoon. Expect rain in the high country pushing over from the west. Winds start to ease in the evening then overnight southerlies bring a few showers.
Highs: 15-22

West Coast
Heavy rain and thunderstorms. Gusty northerlies change to the northwest in the afternoon. Rain eases to showers in the evening.
Highs: 13-15

Southland & Otago
Mostly cloudy with some rain. Coastal Otago has some sun and high cloud, rain for a time from late afternoon. Rain clears coastal Otago in the evening. Gusty northwesterlies tend to the west during the afternoon.
Highs: 13-20

MetService advise that heavy rain will continue to affect western parts of the South Island with severe gale northwesterlies for exposed parts in the east, and possibly Wellington and Wairarapa.

A heavy rain watch has been issued for the ranges of Buller and Westland from Otira northwards. It is valid for ten hours from 1pm – 11pm pm Saturday. There may be periods of heavy rain and rainfall amounts may approach warning criteria.

A strong wind watch has been issued for Wairarapa, valid for 12 hours from 2pm Saturday to 3am Sunday. Northwest winds may approach severe gale in exposed places at times.

A strong wind watch has also been issued for Wellington, valid for 12 hours from 2pm Saturday to 3am Sunday. Northwesterly winds may approach severe gale in exposed places at times.