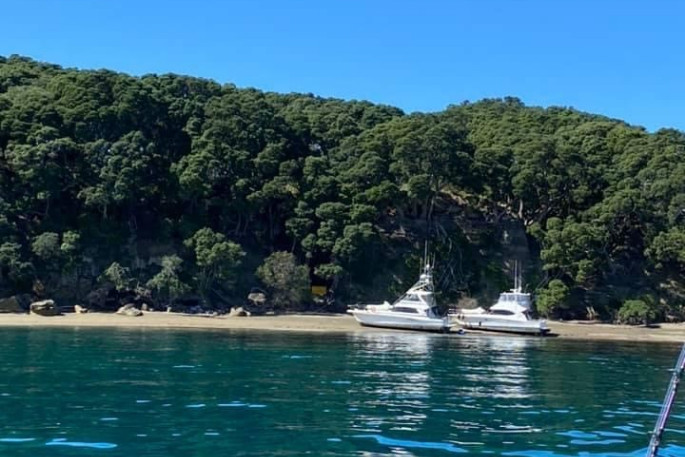 The boats were seen stranded on Sunday afternoon and news of their plight soon spread through the boating community.

Doug Stewart, president of the Tauranga Fishing Club, was soon contacted by his brother-in-law, who knew the owner of one of the boats, in the early afternoon on Sunday.

He quickly realised that there was limited time to liberate the vessels, with high tide approaching at 6pm and bad weather on the way.

With the owner's blessing, and with the help of a few friends, including Stoney Creek director Brent McConnell, Doug headed out to Mayor Island. With some difficulty, he and his makeshift crew managed to get the two boats floating again and towed back to shore, with the second boat back on the mainland shortly after 10pm.

“We went out and pulled them off and brought them back to Tauranga without any incident,” says Doug.

“It was a bit of a mission but if we had not have got them out they would have had a major ecological problem out there.

“They would have just been smashed to bits. The next day we had 20 knots.”

Doug is unsure how the boats ended up in their predicament. He believes the smaller of the boats may have slipped from its anchor and hit the rocks first, with the other getting stuck in an attempt to pull it free.

The boats are now back at Bridge Marina and Tauranga Marina.

Doug says both boats have sustained damage but there was no spillage.

The weather the next day was particularly rough and Doug believes a large amount of diesel could have been spilled if the boats were not removed.

Mayor Island, also known as Tuhua, has been a conservation area since 1953 and the wildlife refuge could have been severely impacted if the two boats were destroyed.

“We just felt there was a need to get out there and get it sorted before it became something it didn’t need to be,” says Doug. “Before it goes badly wrong.”

“If they had been there another day they would have been demolished. Then it would have just been a clean-up job.

“There would have been thousands of litres of diesel on board both boats. I don’t know exactly how much but they are both quite large boats so it saved any of that drama.

“We don’t need those sort of things going on in our neighbourhood.”