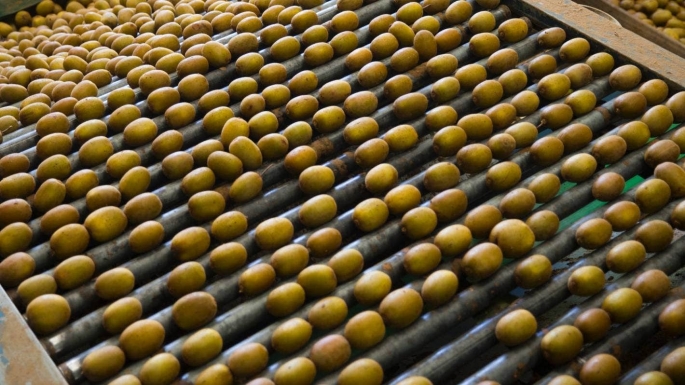 Samples from a batch of New Zealand kiwifruit being sold in a supermarket in the Jiangsu province of China had tested positive for the virus, according to a report published in the Global Times, a nationalist tabloid with strong ties to China's Communist Party, on Friday.

Zespri chief executive Dan Mathieson, in an email to the kiwifruit industry, confirmed it was Zespri fruit exported last month which tested positive, and all subsequent tests had come back negative.

“We are taking this matter extremely seriously and immediately launched our emergency management plans and actively cooperated with the relevant government agencies to trace the product shipment,” Mathieson says in the email.

“We do expect some challenges from Chinese consumers and we are prepared to address those concerns directly.

“The New Zealand Government is also supporting us while our constructive relationships with authorities in Shanghai have also helped us as we have moved through the situation.”

Mathieson says the fruit had been exported from Tauranga, where there is no community transmission of Covid-19, on August 16.

It had tested negative for Covid-19 in Shanghai, and was “disinfected as per standard China customs protocols before being cleared and distributed.”

“While all subsequent investigative tests of the remaining fruit from the batch in stock have come back negative, local authorities in areas where the fruit was distributed have taken steps ranging from temporarily removing fruit from shelves through to testing customers who purchased fruit from the retail outlets where the affected batch was sold,” the email reads.

“The team is working incredibly hard to manage the situation which is moving very quickly.”

A Zespri spokesman says the company’s exports to China would not be affected by the positive Covid-19 test.

The spokesman declined an interview request on the matter.

The Global Times reported the fruit had tested positive on Wednesday and the local health authority had immediately worked to identify “close contacts and sub-contacts”.

“Control measures have been taken for the close contacts while nucleic acid samples of 14 staff and environment samples exposed to this batch of kiwifruit have been taken, test results were all negative.”

Authorities were urging people who had been to the supermarket, or who consumed or handled fruit from the store between September 12 and 23, to comply with health measures.

Ministry for Primary Industries deputy director-general Julie Collins says the ministry had been notified of the issue by Chinese authorities on Friday afternoon.

“MPI has received contact from the Chinese authorities, they’ve also reached out to Zespri to see if they could assist in any way,” she says in a statement.

She says New Zealand had strongly controlled Covid-19, and food manufacturers and exporters had hygiene measures in place.

“The scientific literature and experience of global public health authorities is that transmission by airborne droplets and aerosols is the dominant pathway for Covid-19 infection.”

Trade and Agriculture Minister Damien O’Connor was aware of the matter and was awaiting more information, a spokesman for the minister says.

The Ministry of Foreign Affairs and Trade has been contacted for comment.

"China is a very important market for our kiwifruit. We have a reputation for delivering the highest quality kiwifruit to the world," he says.

"We are confident that Zespri is taking this matter extremely seriously, reviewing processes and engaging with the relevant authorities."

Oh well. It is not like they haven’t done it before. Whether it is food or technology, it’s all the same. Fonterra milk products ring any bells? Looks like NZ will have to test everything before they send it out. It is truly miraculous that the virus survived for more than 2 weeks on the fruit when it has a surface life of up to 72 hours? Look out world, looks like we have a new strain of the virus that far exceeds Delta, from a place that was virus free at the time.

What a lorry load of crap, typical of the Chinese to try and get something for nothing and discredit a NZ exporter, slippery characters these Chinese.

Know who your friends are.

China has done nothing to support the export of NZ grown fruit to China. Instead, they have tried as hard as possible to steal technology and ignore international law. They have politely but adamantly refused to do anything about illegal growing. Most producers, faced with this, would be seeking other markets... Why would you waste time building a relationship with a partner you can’t trust? Now, there is a political crisis with China and Australia (who are seen by them to be our ally...) and, suddenly, Covid is found in crops that were clean when they left NZ. A new market for locally grown kiwifruit is emerging in China and this is just the boost it needs; sow doubt about the Kiwi product and get people using the local crop. We should not be wasting time with this market, we should be finding alternatives.

A bit strange considering there was no Covid in the BOP at the time the kiwifruit was picked and packed????? Have they also forgot where Covid originated from?

Yo, has not Zespri being trying

to shut down the so called illegal Gold Kiwi Fruit growers in China for the last couple of years ??? Sorry, but China (the CCP) do not take kindly to anybody that seeks to show that "business" in China are copying western world "products". And the big question must be how did Covid appear on NZ products that left NZ in mid August ??? Lets get real !!!!!!!!

Given there was not community transmission during the time this fruit was sent to China, and given the fact that COVID-19 is unlikely to survive on the surface of kiwifruit and if it did, would not survive the journey time to China, I would suggest any positive samples are as a result of infected Chinese workers in China. China should also remember where the virus came from in the first place!!!

Suuuure it did, Just China propaganda to sell their own product