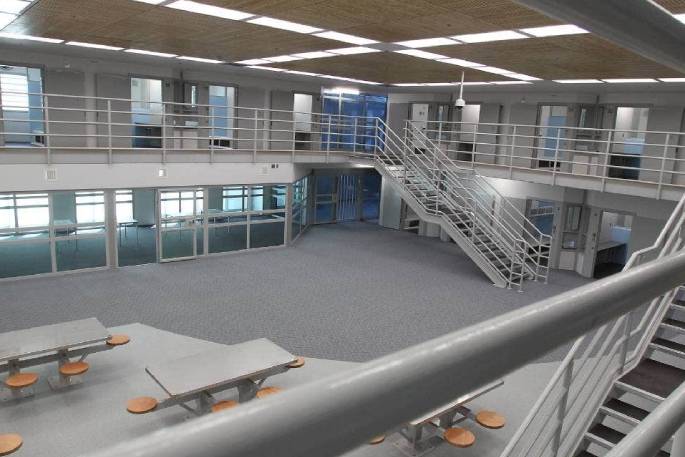 The prisoner is in an isolation unit in Mt Eden Corrections Facility in Auckland. Photo: John Selkirk/Stuff

The prisoner who tested positive for Covid-19 was deemed unsuitable for release by Corrections shortly before he received bail.

Stuff has revealed the man is a patched Black Power member who has about two dozen active charges against him.

Mystery still surrounds how exactly the 36-year-old caught the virus.

Three of his family members, all children who lived at the bail address in Whakatīwai, just over the alert level border, have also tested positive.

In the months leading up to his release, he was on remand in prison facing various charges, including several dishonesty offences.

Among the charges were the theft of several electric guitars from a music shop in Mt Roskill.

On September 6, his application for bail was heard in the Manukau District Court.

It is understood Corrections deemed the 36-year-old unsuitable for release on electronic monitoring.

However, the judge granted the man bail.

Under the current Covid-19 Public Health Response (Alert Level Requirements) Order (No 11) 2021, Schedule 5 Section 12, prisoners are allowed to travel through, into or out of an alert level 4 area if they are returning home.

The man was released from prison on September 8, two days after his bail hearing.

A relative of the man and Corrections have provided differing accounts to Stuff of his journey to his bail address on the Firth of Thames.

The relative said another family member, a healthcare worker who is tested regularly, went to prison to pick him up then drove him straight home. The relative also believes he caught Covid in prison and has questioned why he wasn’t tested immediately before his release.

Corrections maintains he could not have caught the virus in prison.

The department said in a statement on Monday evening GPS records indicated he made four “brief stops” on the way to his bail address.

Two were at “private addresses” in Mt Albert and Māngere, one was at a supermarket at Pokeno, and another was on the road near his bail address, according to the statement, attributed to Corrections’ chief custodial officer Neil Beales.

“He arrived at the house at 12.28pm, two hours and 19 minutes after leaving the prison,” Beales said.

“He remained within the boundary of the bail address until 12.47pm on 16 September, when he visited a car park about 250 metres away from the address, and then presented himself to Police because his address had become unavailable and the court had revoked his bail and issued a warrant for his arrest.”

The relative told Stuff the family called police when the man contacted his ex-wife, in breach of bail conditions.

“He was then in Police custody overnight, before being transported to Mt Eden Corrections Facility on Friday, September 19, arriving at 6.45pm.”

His first test came back positive and he is now in a secure quarantine unit inside the remand prison.

Director-General of Health Ashley Bloomfield said the man was probably infected by someone he travelled home from the prison with.

Beales said the man was given his first dose of the Covid-19 vaccine on the day of his release.

Five prisoners at Mt Eden who had contact with the man had tested negative on their day three swabs, and they would continue to quarantine, Beales said.

“Two prisoners initially refused to be tested, however one changed his mind this morning and has today been tested.”

Just another situation of yet another reckless individual who obviously doesn’t give any thought whatsoever for what his actions could cause. I couldn’t understand how he was even granted bail by his rap sheet he doesn’t learn .As a new Zealander I’m sick & tired of how slack our legal system is why is it that person/persons who do deserve to be granted home detention have it denied yet others get it not fair at all

The person is a gangster and a criminal. Why would any normal person believe that he would strictly observe bail rules ??????

Our judiciary is clearly a soft touch. We see this here and we see it with the knife wielder at Countdown. People who are a menace to society are being treated as if they were children, not as hardened criminals who take every opportunity to buck the system against the rest of society. They obviously know how the system works, and how to work it to their advantage.

A chapter of non-compliance...

... and errors that a community has to suffer for now. How can a petty thief cause such a wave of anxiety and inconvenience for so many people? Until we get some serious enforcement of Covid restrictions, this will keep on happening. Maybe it needs something like a mandatory 2 years jail (minimum) if people ignore Covid restrictions... You show contempt for the community and scorn for the Law, you get locked up and have time to consider it.

This does make a mockery of the justice system. The makeup of the prisoner and his driver, screamed ’trouble’!. I would say ’unbelievable’ but I think we all knew what the situation would be. Common sense is not so common among those on the judges bench!! Some judges need to be ’retired’!

He was to be transported directly to his bail address without any unnecessary stops. He made 4 stops. The only necessary I could justify would be a service station for fuel and toilet. That’s it. A Police unit should have been dispatched immediately to take him into custody and it is highly likely all this could have been avoided. I did initially blame the Judge (sorry, I was wrong) but now reading this it was the prisoners fault and his driver. I guess new charges on his rap sheet won’t mean much to him at all.