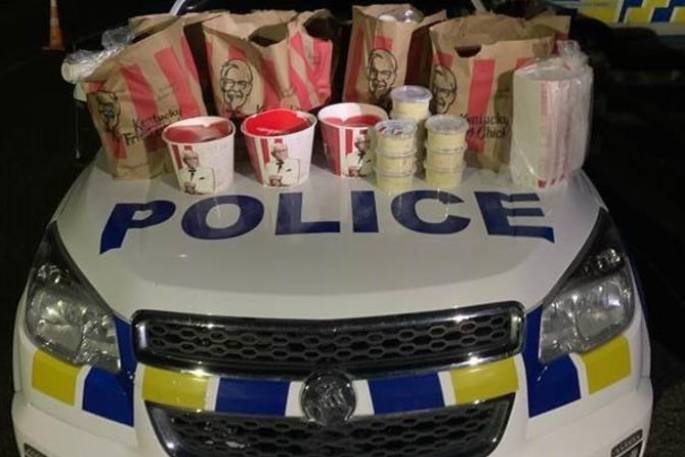 Two gang associates trying to get into Auckland with more than $100,000 in cash and a car boot-full of KFC have been arrested.

The pair were nabbed by police patrolling back roads near Auckland’s southern boundary.

"Officers noticed a suspicious looking vehicle travelling on a gravel road and upon seeing the police car, the vehicle did a u-turn and sped off trying to evade police," says a police spokesperson.

"The vehicle eventually pulled over and police established they had been travelling from Hamilton trying to get into Auckland."

The vehicle was searched and police located the cash, alongside empty ounce bags and a large amount of takeaways.

Both men, aged 23 and 30, were summonsed to appear in court at a later date for breaching the Health Order and further charges are likely.

"In another incident on Auckland’s northern boundary, police turned around a man who claimed he wanted to cross the border to charge his electric vehicle, despite there not being a charge station where he said he was going.

"He was turned around.

"Police want to remind the public that Police will continue to stop and question motorists travelling through the checkpoints, and enforcement action will be considered for people deliberately attempting to breach the restrictions.

"Police will also be patrolling rural and backroads to ensure people are not trying to use them as a way through boundaries."

Further details around the requirements for permitted travel can be found here: https://covid19.govt.nz/travel/permitted-travel-at-different-alert-levels/business-travel-across-an-alert-level-boundary/

Since Alert Level 4 came into place, 86 people have been charged with a total of 90 offences in Auckland as at 5pm yesterday (19 September 2021).

In the same time period, 183 people were formally warned for a range of offences.

To date, Police have received a total of 9,767 105-online breach notifications relating to businesses, mass gatherings or people in Tāmaki Makaurau.

As of 11.59pm yesterday, a total of 180,339 vehicles have now been stopped at the 10 checkpoints on Auckland’s northern and southern boundaries.

A total of 2286 vehicles have been turned around during this time.

At southern checkpoints a total of  1741 vehicles have been turned around.

At northern checkpoints a total of  545 vehicles have been turned around since September 6th.

As at 11.59pm September 19, 1656 heavy vehicles have been stopped and 125 of them have been turned around attempting to leave Tamaki Makaurau.

Of those, 13  vehicles were turned around yesterday.