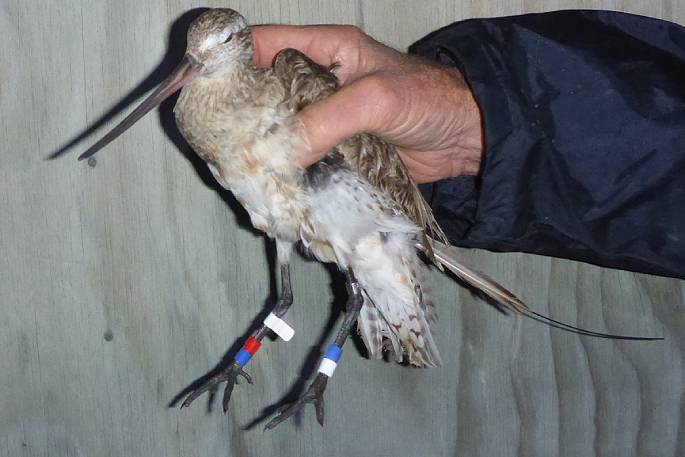 4BRWB is one of 20 godwits fitted with radio transmitters in November 2019. Photo: Phil Battley.

An unlucky male godwit/kuaka migrating back to the Firth of Thames has been forced into a massive u-turn over the Pacific Ocean and finished up back at his Alaskan take-off point after 57 hours of constant flight.

The adult male bird is known as 4BRWB because of the bands on his legs.

He took off from tidal flats in Alaska’s Yukon-Kuskokwim delta on September 11 (NZ time), before encountering strong winds 2000 kms into his journey across the Pacific Ocean and turning back after flying for 33 straight hours.

4BRWB is one of 20 godwits fitted with radio transmitters in November 2019, says Massey University Associate Professor of Zoology Phil Battley - an ornithologist and godwit expert with a long association with the Pūkorokoro Miranda Shorebird Centre.

Other godwits who left the Yukon at the same time as 4BRWB have made it to New Zealand, with godwit-watchers reporting an influx of the birds over the last week. But it’s also feasible others also opted to u-turn.

“Over the years we’ve tracked about 70 godwits leaving Alaska, and this is the first we know has had to turn back because of bad winds.”

Phil Battley says the real interest is now in what the bird does – how long it rests for, the route it takes, and “whether it will make it all the way down to New Zealand”.

“He’s still got time. He won’t have used all his energy – he’s just realised he was facing headwinds and thought ‘this isn’t a good start to a 10-day flight’… and turned back.”

4BRWB weighed 284 grams when he was banded.

He will have weighed up to 500 grams when it took off from the Yukon and will burn up his fat reserves on its 11,000 km migration.

“This bird has a history with us already: he did a complete migration last year, and this is the second time we’re tracking it,” he says.

Godwits are classed as declining due to loss of their habitat.

I’ve always been staggered by the Arctic Tern, but I didn’t know Godwits made this kind of trip. Good to know he’s safe and his decision to abort was the right one.