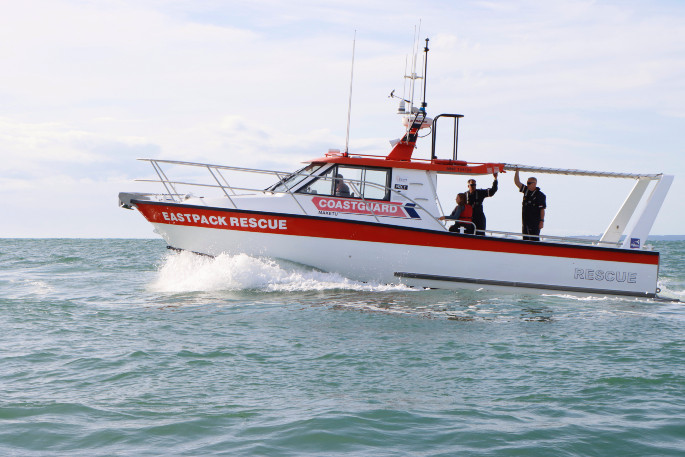 A nearby vessel rescued three people from the water, transferring them to the Coastguard Maketu rescue vessel on Saturday morning. Photo: SunLive.

Three people were rescued from the water following a boat capsizing on the Kaituna Bar on Saturday.

The boat went out through the Kaituna entrance towards the open sea and was overturned by one of the waves breaking on the Kaituna Bar.

"A distress relay was sent out and Coastguard Maketu was urgently paged.

"A nearby vessel responded to the distress relay and were on the scene moments before Coastguard and were able to pick all three people out of the water, who were all wearing lifejackets."

The three people were then transferred onto the Coastguard Rescue Vessel and taken ashore where they were treated by an awaiting ambulance and have since been released.

"Other than being cold and in shock, they are otherwise safe and well. Coastguard Maketu then went back out to retrieve the families capsized vessel."

"Ngā mihi nui to the boaties on board the vessel of opportunity who played a crucial role in assisting Maketu Coastguard to save lives this morning. Ka pai to our Coastguard volunteers and everyone involved! ❤️ #savinglivesatsea," writes the Coastguard New Zealand spokesperson on Facebook.