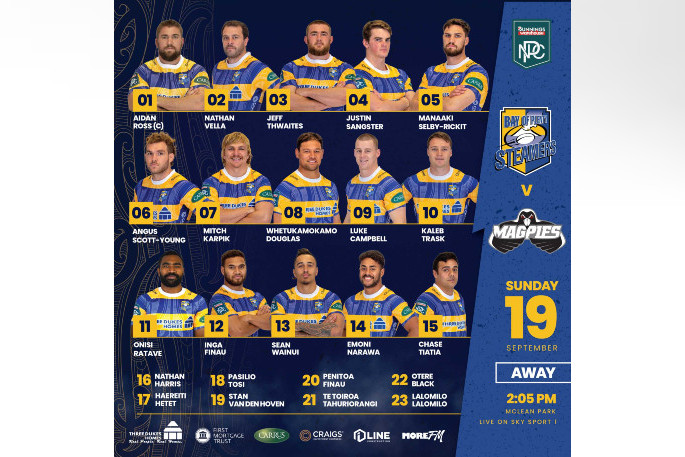 The year was 2004 when the Bay of Plenty Steamers last held the elusive Ranfurly Shield.

On a day that has become synonymous with Bay of Plenty Rugby legend, the Steamers pulled off the performance of a lifetime, defeating the heavily favoured Auckland 33-28 in an Eden Park thriller to lift the Shield for the first time in the provinces history.

The game was one of the all-time greats. Both teams scored three tries each, with Bay of Plenty sealing the victory with a try by winger Anthony Tahana when they had Auckland on the back foot for most of the last 10 minutes.

The game was also the performance that skyrocketed Glen Jackson's stock value to even greater heights. Jackson scored a try and kicked three penalties, a dropped goal and three conversions for a Man of the Match performance.

This Sunday, the Steamers get perhaps their best opportunity in 17 years to re-lift the Shield when they play the Hawkes Bay Magpies at Mclean Park.

"The boys are excited and looking forward to the opportunity to play for the Shield," says Steamers Head Coach Daryl Gibson.

"Two of our coaches – Mike and Tanerau, never got the opportunity during their BOP careers, so the boys realise it's a treasured moment and a great opportunity to pull together and represent the union with pride."

One man who did play for the Shield and who scored that famous match-winning try back in 2004 was former Bay of Plenty Steamers winger Anthony Tahana.

"To be honest, my greatest memories were from after the game!" Says Tahana.

"The reaction from everyone, the supporters who did come up on the day was special. I remember when on the way home, we stopped at the Red Fox Tavern, and all the supporters followed us there. It was pretty magical and an honour to bring our region so much pride."

To Tahana, the Shield meant, and still means, a massive deal to both himself and his teammates who won on that fabled day.

Seventeen years later, he says he believes that the Steamers have what it takes to once again make history.

"My message to the Steamers who are playing on Sunday? Just run it! Chance your arm, don't worry about the score at the end of the day because it's only a one-off game. Just run everything and give it your all."

The Steamers play the Hawkes Bay Magpies at Napier's Mclean Park on Sunday 19 at 2.05pm.

Under COVID 19 Alert Level 2 restrictions, the match will be played with a strict no public viewing policy from inside the venue for health and safety purposes. Supporters can catch all the action live on Sky Sport 1 (channel 051).

My Hawkes Bay relatives texted me after the great try to put us in front with two minutes to go and said we had the shield. I said I have been here before a two minutes is forever as a bay supporter. Unfortunately another would have been, could have been day! A very nice effort by the team though but would have been nice to hold on for a change.