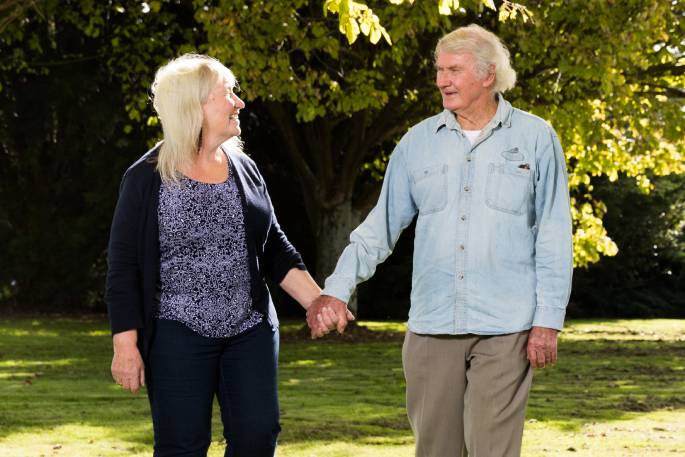 September is Wills month and the great and generous act of naming a charity in your Will can have an impact well into the future.

It is also one of the most significant gifts that anyone can give to help save a life.

Bruce and Gill know how fragile life is after an horrific accident almost ended Bruce’s life.

Bruce, a tough back-country farmer, cut an artery in his arm while shearing sheep on their very isolated property.

It was potentially fatal, with his life ebbing away in front of his terrified wife’s eyes.  Bruce had literally minutes, not hours, to live.

“The 111 communicator told me the helicopter was 13 minutes away…10 minutes away…5 minutes away.   Bruce had lost the ability to reason and we were trying to talk to him, to keep him with us.  He was slipping away,” says Gill, who, with quick thinking, grabbed a screwdriver to use as a tourniquet on his severed wrist.

“I swear to this day, the sound of the helicopter approaching was in time with my heartbeat.  It was absolutely amazing hearing that flying in and landing in the paddock beside the house.”

The rescue helicopter swooped in just in time and a time-critical flight was undertaken in under five minutes to Whanganui Hospital – the flight of Bruce’s life.

“The rescue helicopter gave us the most precious gift of all - time,” says Gill.

“It was such an incredible life-saving gift.  It was the main reason that we wanted to leave a bequest in our Will for the rescue helicopter, not just out of gratitude, but with the desire to give someone else that gift of time…time so often cut short with no warning, time to say the things we need and want to say to our loved ones,” she says.

Today, more than 3000 people owe their lives to the TECT Rescue Helicopter established by a Trust formed from a legacy in 1985 when Philips, a private company, lost two of its senior executives in a light aircraft crash.