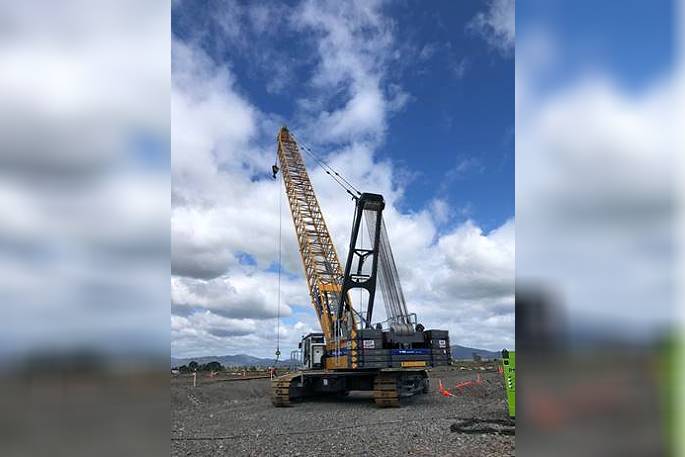 The crane being used at the construction site. Supplied photo.

Some project milestones come in very large packages and the huge Liebherr crane which has been purchased to work on the Ōpōtiki Harbour entrance has certainly turned a lot of heads, as it has been delivered (in parts on several trucks) and now that it is hard at work on the work site.

David Wyeth, Project Manager from HEB Construction is leading the works on the Opōtiki Harbour Development.

He says the new crane has been a great addition to the worksite.

“The new crane is a Liebherr 895 with a lifting capacity of 200T. It has nearly 1000 horse power and can be rigged with a maximum of 80m of boom, although it has 42m of boom in its current setup.

“The crane is a very versatile piece of equipment and can be used with grabs, drag buckets, diaphragm wall grabbers, oscillators as well as demolition and dynamic compaction equipment.

“It is the dynamic compaction feature that will be its primary use on the Project but it will also be involved in sheet piling and placing concrete hanbar units. The crane can drop a 30 tonne weight from 30m while its high speed winches are in ‘freefall’ mode – making the most of gravity in a controlled falling. This process means that the crane doesn’t have to release the dropped weight while it is falling, so it can raise the weight and drop it again in a matter of seconds rather than minutes. A very handy feature when you have to drop the weight thousands of times over the course of the Project.

“The crane was purchased directly from Leibherr in Germany and is the last machine off the production line of this model and is also the most expensive crane HEB Construction have purchased in its 40 year history.

“When covid levels allow, we’d like to find a way for the community to suggest names for the crane so keep an eye out for more information on that soon.”

John Galbraith, Project Director on the Opōtiki Harbour Development, says the arrival of the large crane on site is another visible sign of progress with the Ōpōtiki Harbour works.

“By the end of September, we expect to be about 40% of the way though the project, with the Eastern Wall pushing out through the surf.

“We are very pleased with the progress of the project to date and the support and patience of the Ōpōtiki community with the changes, trucks and other disruption. We are on track to complete works and open the new channel in late 2023.”