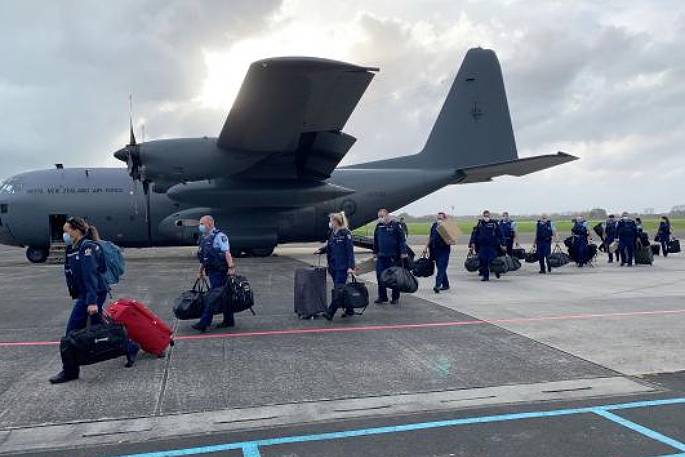 In the less-than-luxurious surroundings of a Defence Force Hercules, and in the face of some ugly weather, police reinforcements from around the country flew in to support the mahi on Auckland's southern boundary.

The chartered C-130 Hercules left Whenuapai, Auckland, on Friday morning and flew to Dunedin, picking up staff there, at Christchurch and Woodbourne Military Camp, Blenheim, as it headed back north.

A scheduled stop at Wellington was called off because of the weather, meaning district and Royal New Zealand Police College staff were bussed to join the flight at Ohakea airbase for the final hop to Hamilton.

The flight and the 32 reinforcements arrived in Hamilton on Friday afternoon to support enforcement efforts at the Waikato/Tāmaki Makaurau checkpoints.

Staff from Bay of Plenty and Central Districts have already been helping at the border, taking the total of out-of-district staff to 45.

“It’s the right thing to do,” he says. “It was great to see them arrive. I know the current staff working on the borders appreciate the ability to take some time off, now there’s extra staff to take over.”

These staff are the first of three rotations into Waikato to provide relief for checkpoint staff and ensure Level 4 enforcement of Tāmaki Makaurau’s southern boundary continues safely.

“We’re grateful to these officers from around the country for aiding us during a very busy time for the Upper North districts,” says Bruce.

“Our colleagues in Tāmaki Makaurau have a big job ahead, with Alert Level 4 enforcement still a big focus for them as well as the checkpoints which are playing a major role as part of the reassurance we provide to communities on both sides of the boundary.”

Waiting to board the Hercules, Constable Analupe Halaleva, from Road Policing in Dunedin, and Senior Constable Karren Bye, from Mosgiel, were both appreciating the chance to help.

“We’re looking forward to giving other districts a hand when they need it most – looks like they have been working some long hours in tough winter conditions,” says Karren.

Analupe agrees. “I like the fact that we are giving some hard-working colleagues a chance to have a break.”

Senior Constable Kyle Abbott, from Tasman District, had a birthday to remember as he worked his first shift on the boundary. “This is something Police do; we help each other out – where and when we are needed,” he says. 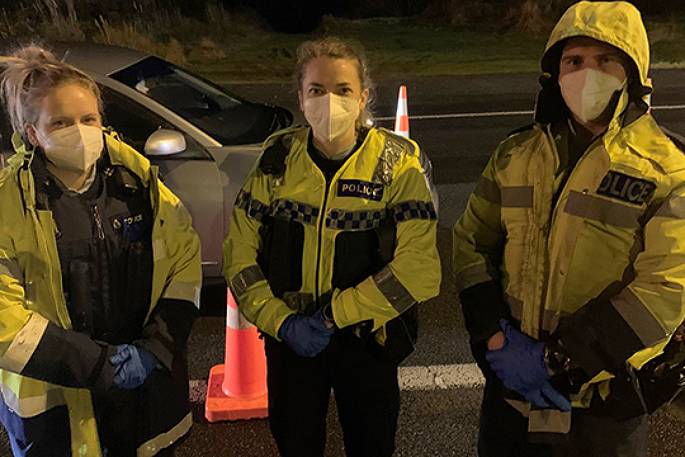 Constables Summer Pritchard and Sarah Stichbury, from Whanganui, and Jake Bone, from Marton, loving the weather at the Orams Road checkpoint.

It might be called Operation Romeo, but the work is anything but romantic.

Police staff - including Central Districts relievers - working on Friday night at Orams Road on the Waikato-Counties border had to contend with some wild weather including a mini tornado which knocked over nearly every road cone for at least 2km along the motorway.

Standing them up again took a long time but thankfully Police staff had help from NZDF personnel working at the checkpoint.

Shortly after this, some unruly farm animals tested the shepherding ability of the staff there, with around 40 cattle trying to decamp from a paddock on to Mercer Ferry Road.

Police staff managed to herd them on to Orams Road and the cattle were corralled back to their own property by Police and NZDF staff and the farmer.

According to witnesses, without our people present it could have been a scene of udder chaos.

I think you raised this once before. I totally agreed with you then and I totally agree with you now. It makes perfect sense. We don’t use our Defense forces anywhere near enough. These Police Officers could be out doing real policing as Walbuck suggests. Our Police generally do a terrific job and this is taking too many down the side street. They are doing a great job and it is very important but as dumbkof2 says, the Army could be doing this with a single Police Officer supervising each checkpoint.

Wouldn't it be awesome

If they put this much effort into fighting real crime. Coming down hard on gangs, Drugs, illegal firearms and violence. Rather than just trying to act as Border PAtrol workers

so how many hundred thousand dollars did this cost plus all the ongoing costs . whydidnt they just use the army from the nearby army base . just need a couple of cops to supervise