Calls for another vessel to aid domestic shipping 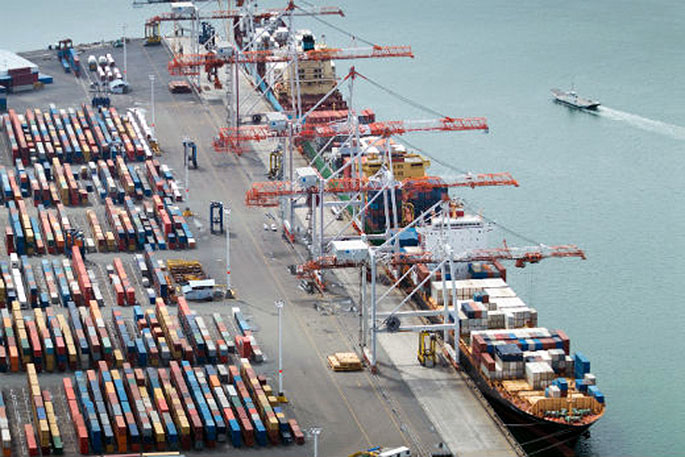 Please - not another study.

That's the call from coastal shipping proponents who say money allocated by the Transport Agency needs to go on getting another ship up and running immediately.

Thirty million dollars over three years has been set aside for domestic shipping, but exactly what that would be spent on and when, remained unclear.

Maritime Union national secretary Craig Harrison has long called for the return of domestic-flagged vessels, running routes up and down the coast.

"So we know there is one company in particular that is quite interested, there could be another, but we know they're actively looking at it and, if they had the support, they could do it.

"And they're talking just a matter of weeks or months to bring another vessel onto the coast."

He says the support required would be a law change, to prevent international ships being able to carry domestic freight loads.

Steve Chapman, the former head of Pacifica Shipping which is the firm running New Zealand's only coastal ship, says that was because for years, international companies had undercut any chance of local coastal shippers having a fair go.

"They've got empty space, say, going Auckland to Tauranga through to Lyttleton and they'll cut a spot rate that a dedicated coastal operator, in all probability, could not compete with."

However, he says that's changing.

"That ability of theirs to take cargo and take up some of the strain on the domestic supply chain is dissipated because they can get more money, more revenue, on other routes.

Harrison also says international lines would probably prefer only one or two ports of call and it would make it easier to manage the Covid-19 virus.

"Rather than going around multiple ports, picking up a few containers here and there, I'm sure some of these shipping companies would be quite happy to, for instance, go to a particular port pick up all their cargo and then leave.

"And also, the impact of Covid-19, you know clearing vessels, have they got Covid yes or no... so there's an element of protecting New Zealand as well if we can limit the amount of time these ships are hopping around the ports, then that's another factor that should be considered."

He's encouraged by the investment confirmation from Waka Kotahi, and hopes it would result in action and not just more talk.

"It will unlock the potential of our regional ports and also help the major issue of moving containers out of Auckland into the regions where they're needed for exports.

"So there's a win-win for everyone, we just need to get on with it ... for $30 million we just hope it's not another study."

Both agree coastal shipping would not seek to replace road or rail, and would have to work in unison with the other transport modes.

"Traditionally, it's been the two legged stool ... road and rail and coastal shipping forever been ignored. Coastal shipping needs now to come and play its part but it needs central government policy settings to allow it to do so," says Chapman.

He says $30m was a good start, but would like to see further investment over the coming years.

"Five to 10 years ago, $30m would have bought you a brand new build in the 1100-1500 TEU mark. However, the effect of Covid-19 has seen charter rates and the new building of ships overseas just go skyrocketing so $30m wouldn't get you as much as it would have, maybe even just two years ago."

Previous studies have highlighted the benefits an effective coastal shipping route would have for resilience and when it comes to cutting transport emissions.

I agree with Mr. Harrison. The economics of using our own coastal shipping are obvious. The problem is though, that international shippers are only coming here reluctantly, and removing the coastal shipping source of revenue for them may just be another disincentive. We would need to make sure that the international points of contact were efficient and that containers are not sitting around with ships queued up outside the ports. They would be encouraged if they could get in, load/unload and get out. From first hand experience bringing a container from the UK, I can say that Tauranga (Mount) was exemplary for this. I saw the ship sail in and I saw it sail out the same evening. All my stuff (including a car) was cleared within 48 hours. We obviously have the capability. I hope Mr. Harrison is listened to.