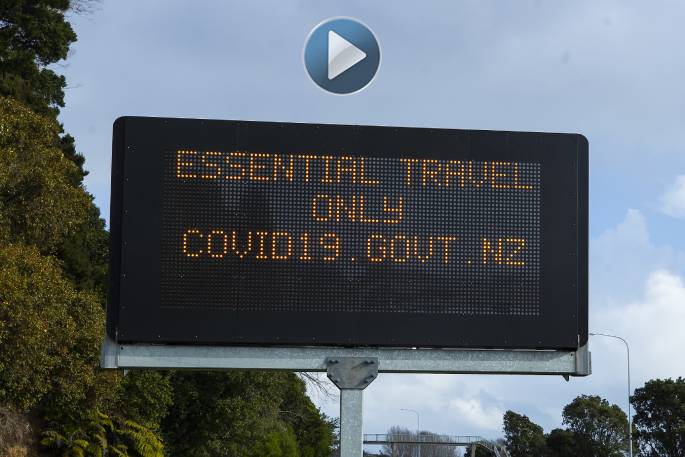 With Auckland still at Level 4, only essential travel is permitted in the city. Photo: John Borren/SunLive/File.

There are 15 new cases of Covid-19 in the community.

All 15 of the new cases are in Auckland and are household contacts.

Two cases have also been identified at the border.

It takes the tally for community cases in the current outbreak to 970.

There are nine epidemiologically linked subclusters. The two largest subclusters are the Mangere church group: 381; and Birkdale social network cluster; 77.

There are nine epidemiologically unlinked subclusters.

Currently, there are a total of 22 cases in hospital. North Shore has four cases, Auckland has eight and Middlemore 10. There are four cases currently in ICU.

Director-General of Health Ashley Bloomfield says there are no unlinked cases today.

The one case from yesterday that was not linked to the outbreak, has now been linked, Dr Bloomfield says.

He says 10 cases in the outbreak are yet to be epidemiologically linked.

Bloomfield says the focus for testing is in the following suburbs - Massey, Māngere, Favona, Papatoetoe, Manurewa and Ōtara.

Anyone with cold and flu symptoms is urged to get a test.

He says families with children are urged to get tested together.

So far this month, 15,685 essential workers in the Auckland region have been tested with no positive cases identified.

"On contact tracing we're now focusing our efforts on 1242 contacts that are under active management. This is a change to the reporting total context for the whole outbreak.

"The number of contacts under active management is now down to a much smaller number as ... majority of our contacts have now either returned negative tests or have had exposures more than 18 days ago and we're not generating significant numbers of new contacts outside of households."

A wastewater sample in Pukekohe has detected Covid-19 and further tests are underway.

Bloomfield says Public Health has advised there were four cases in the area who were in quarantine but have now returned home. "This could explain the result. But anyone in the Pukekohe area, who has symptoms, please go and get tested."

There are no other "unexpected detections" in wastewater samples in Auckland or around the country that have returned positive results.