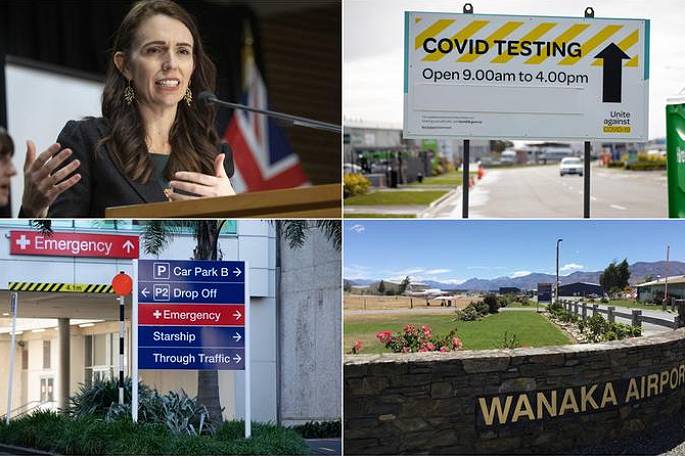 Prime Minister Jacinda Ardern announced today that Auckland will stay in Covid-19 alert level 4 for another week until 11.59pm next Tuesday. Cabinet has made an in principle decision that Tāmaki Makaurau will then move to alert level 3.

The rest of New Zealand will remain in alert level 2 until Tuesday next week.

Alert level settings will be reviewed next Monday.

While there is nothing to indicate there is Covid-19 outside of Auckland, the lower restrictions there mean a far greater risk of spread if it did escape, says Ardern.

Director-General of Health Dr Ashley Bloomfield says the "lockdown is working" and it is really only a small number of cases that the ministry is focused on.

"The testing is at a good level ... so our view and our advice is that another week in lockdown in alert level 4 in Auckland gives us our best chance to really finish the job off here."

Prior to the announcement, Otago University epidemiologist professor Michael Baker said Monday's Covid-19 numbers supported the argument for Auckland staying at alert level 4 for at least another week.

"So some of these cases in the community could spark up or flare up as outbreaks or clusters and that is not what we want to see at the moment."

There was already concern about the situation in Auckland before today's numbers, he said.

"And that is not as much just the numbers but the fact we're still seeing each day unexpected cases and that is just as important as the total."

Any lowering of the alert level in Auckland would take the pressure off the virus and risk undoing all the good work the city had already done to suppress the virus, Baker said.

There are 33 new community cases of Covid-19 being reported on Monday, the Ministry of Health has confirmed.

In a statement, the ministry said there were also three new cases in managed isolation facilities.

All the new cases are in Auckland, bringing the total number of community cases in the current outbreak to 955.

The ministry said 32 of yesterday's cases have been epidemiologically linked. The one case yet to be linked is a person who presented to Middlemore Hospital on Saturday. There are seven others in their household. All seven are included in today's 33.

In hospital, there are 21 cases - four in North Shore, seven in Auckland and 10 in Middlemore. There are also four cases in ICU or HDU.

That brings the total of cases since the pandemic began to 3593.

Ardern said surveillance testing of healthcare workers and essential workers had also not identified any transmission.

"It's also clear there is not widespread transmission of the virus in Auckland."

A Pacific social service provider says demand for food and essential items in Auckland remains high and a newly-announced government fund will help.

The government this morning announced an extra $10 million for food and essential items.

Pasifika Futures chief executive Debbie Sorensen says the organisation is in contact with more than 300 Pasifika people who are in quarantine.

Up to now, Pasifika Futures has spent more than $7.5m on 22,000 support packages and although delivery of the packages was a bit slow during the first two weeks of the lockdown, there is no wait now, Sorensen says.

Police said they're considering the charges to file against the couple who flouted lockdown rules by travelling to Wānaka from Auckland last week.

The couple used their essential worker status at a boundary checkpoint to get to Hamilton and then flew to their holiday home in Wānaka.

The couple - a 26-year-old woman and 35-year-old man - will be prosecuted for breaching the current Health Order.

The couple will be issued with a summons to appear in court next week.

Police said they were notified via the Covid-19 compliance reporting tool online, and found the pair on Saturday afternoon.

Meanwhile Queenstown Lakes District Mayor Jim Boult wants to know what police will be doing to avoid another breach of lockdown rules and potential spread of Covid-19 in the local community.

Boult told Morning Report the act of selfishness had put the town's Covid-free status and economic wellbeing at risk and that he would be consulting with police on the matter.

"I just don't under the selfishness of people who think it's ok to do that," he said.

Boult said it was not the first incident of its kind and now wanted a plan in place to mitigate the risk of people slipping across the alert-level borders into the region.

"Do they give any thought to the folk they are possibly endangering? I think not. But my question today is to the police and how we can ensure this won't happen again."

Ardern had a special shout-out to Aucklanders who have been doing it tough in level 4:

"To all Aucklanders, you've done an amazing job so far protecting yourselves, your family and your community.

"We owe you a huge debt of gratitude ... but the cases are telling us we have additional work to do."

She said four weeks into lockdown, it might be tempting to relax their bubble, but asked everyone to treat every day as seriously as they did day one.

People should have an assigned person who goes to the supermarket, Ardern said.

Auckland District Health Board will only be allowing patient visits on compassionate grounds, after a nurses union launched legal action challenging it's policy around visitors.

From 7am on Tuesday morning, visits to Auckland Hospital will be restricted to compassionate grounds.

This follows the New Zealand Nurses Organisation taking legal action against the health board to tighten up its visitor policy to match Counties Manukau and Waitematā DHBs.

Previously, Auckland Hospital patients were allowed to nominate two visitors, one of whom could visit on any one day.

All visitors were screened for Covid-19 symptoms.

Suburbs focused on for mystery cases

Seven Auckland suburbs will be the focus of testing and contact tracing this week as health officials try to crack the mystery Covid-19 cases.

Health officials are on the hunt for the virus in Mt Eden, Massey, Māngere, Favona, Papatoetoe, Ōtara and Manurewa.

That was where they had the biggest concerns about the 34 cases with no known links to the current clusters.

Health authorities had already been surveillance testing - looking for the virus in asymptomatic people rather than waiting for it to turn up when people get sick.

Last week they were at essential workplaces, including Countdown's distribution centre and its two big warehouses for online deliveries.

New South Wales has had 1257 new local cases of Covid-19 and seven deaths in the 24 hours to 8pm last night.

There have now been 184 Covid-19-related deaths in New South Wales since 16 June 2021 and 240 deaths in total since the beginning of the pandemic.

NSW Premier Gladys Berejiklian said 46.2 percent of NSW adults over 16 have received two doses of vaccines and 78.5 percent have received their first dose.

Queensland today recorded two new locally acquired Covid-19 cases in the past 24 hours, but both were in home quarantine.

ACT recorded 13 new community cases of Covid-19 and at least 10 of them spent some time infectious in the community. Six of the new cases are yet to be linked to a known case or transmission site.