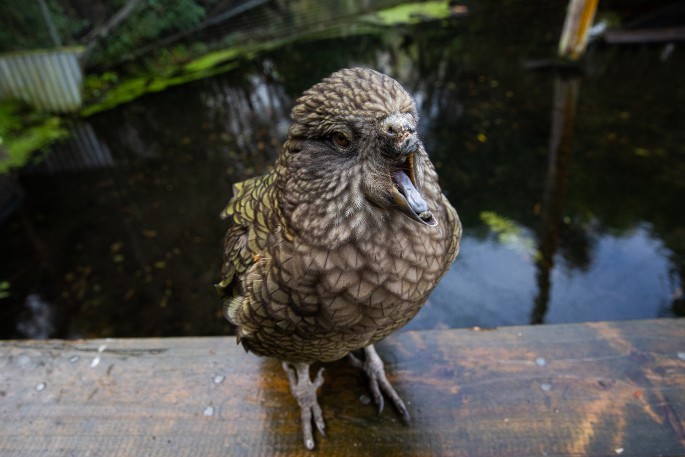 Scientists say they’ve found the first evidence of tool use by a kea for the purpose of self-care, in a new study from the University of Auckland.

The study, published in Scientific Reports, uses observations of a disabled kea (Nestor notabilis) named Bruce, housed at Willowbank Wildlife Reserve in Christchurch, who has overcome his disability by using pebbles to preen himself.

Although anecdotal reports exist for self-care tool use in pet parrots, this form of tool use is rare in the wild, and this is the first time it has been observed in a kea. It is also the first scientific observation of a parrot using a pebble for self-care. 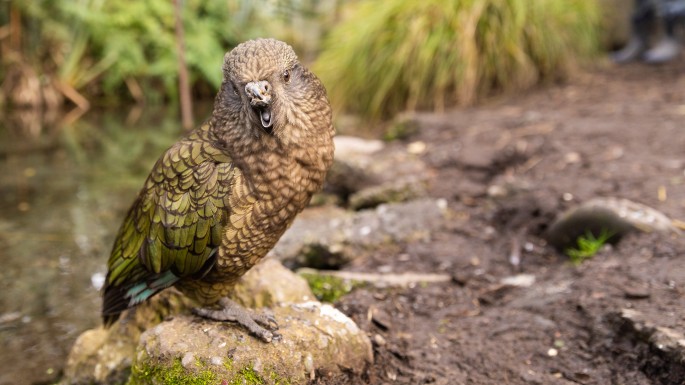 PhD candidate Amalia Bastos from the University’s School of Psychology says Bruce’s tool use highlights the intelligence of this alpine parrot species.

“Kea do not regularly display tool use in the wild, so to have an individual innovate tool use in response to his disability shows great flexibility in their intelligence. They’re able to adapt and flexibly solve new problems as they emerge,” says Amalia.

Bruce’s behaviour was consistent and repeated, and so is regarded as intentional and innovative.

“The pebbles he picked up were different to those picked up by other kea, they were always of a certain size. This points to an intentional act: to find a way to preen himself without the top half of his beak.”

Bruce was found as a juvenile by a researcher at Arthur’s Pass in 2013 with the upper half of his beak missing. It’s not known exactly how the injury occurred, but it is thought to be the result of an accident with a pest trap.

He was brought to the South Island Wildlife Hospital, where he was nursed back to health and now lives in a large aviary at Willowbank Wildlife Reserve.

Although keepers ensure that Bruce has access to soft foods which can be eaten without an upper bill, he has also learned to eat harder foods by pressing them up against hard objects. 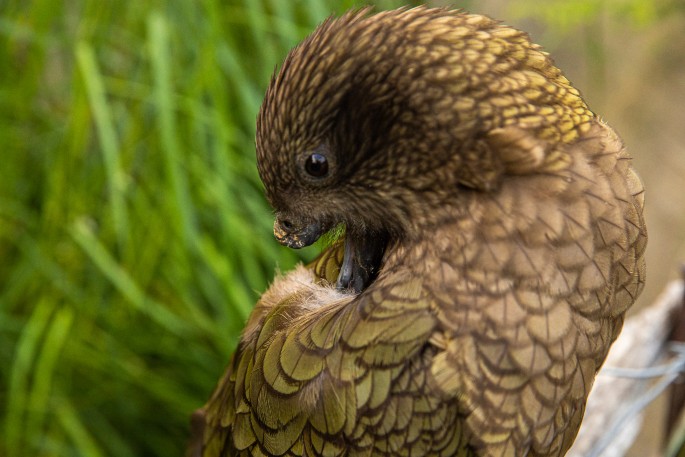 Bruce has adapted well to his injury and can manipulate various objects by holding them between his tongue and lower mandible. His innovative pebble preening behaviour was first noted by keepers at Willowbank in late 2019.

To establish this behaviour was in fact intentional tool use, researchers observed Bruce in the aviary at Willowbank Wildlife Reserve across nine days.

They recorded instances of him manipulating objects or preening himself and were able to establish five lines of evidence to show that his tool use is intentional.

The first line of evidence the researchers found was that in over 90 per cent of instances where Bruce picked up a pebble, he then went on to use it to help preen. Secondly, in 95 per cent of instances where Bruce dropped a pebble, he retrieved or replaced it before continuing to preen. Third, they also observed Bruce selected pebbles of a specific size that were suitable for preening, rather than randomly sampling pebbles in his environment.

Additionally, from observations of the other 12 kea in the aviary, they also found that no other bird used pebbles while preening, and that when the other individuals did interact with objects, they selected stones of different sizes to those Bruce used.

Amalia says it is important to examine rare behaviours like this through repeated observations to ensure accurate reporting.

“This paper also provides a new framework through which we can provide robust evidence for rare behaviours,” says Amalia.