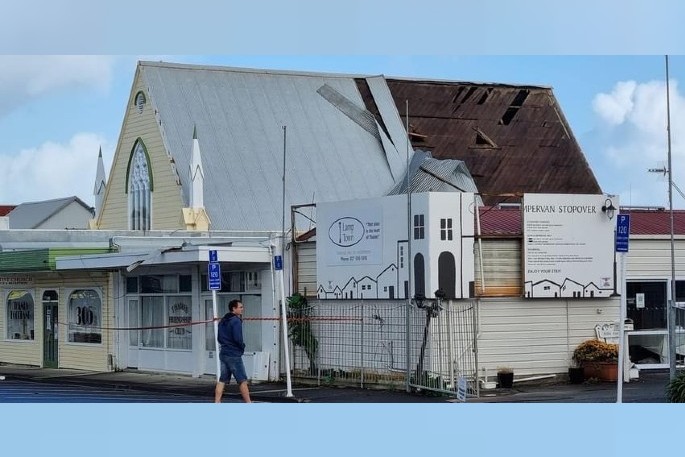 Iron sheets were torn from the roof of the Thames Baptist Church. Photo: Kylie Gunn.

Pastor Chris Lee was at home when the fire brigade phoned him.

“I’d heard the heavy wind gust which woke me up,” says Chris. “Then I heard the siren and thought it was a tree that had come down along the road. Then they phoned me and said ‘no it’s you’."

On arriving at the church at 303 - 305 Mary St, he could see that half of the roofing iron from the eastern side of the high auditorium roof had been peeled off leaving the rest of the church building intact.

“The wind took the iron and stacked it vertically across the road at Wenzlick Automotive. I came home, it rained heavily and I thought it was going to be damp inside, so I went down again at 3am but it was fine.”

Next door at Lamp Town, the local mobile home park, it was a noisy time for the tenants. Some are holiday makers and some live there.

Lamp Town owner Kylie Gunn was at her home, off-site, and had heard the wind. On coming down to check the park, she found that some boards from their sign had come down and saw the damage to the church roof.

“David Gibson at the Baptist church called me early this morning and I came down and made sure the tenants were safe at Lamp Town,” says Kylie. “No one was injured.”

This morning, she found it interesting to see the original roof of the Baptist church that had been exposed by the wind.

“It makes you appreciate the age of it and the design behind it,” says Kylie.

Boards from the Lamp Town sign fell off during the wind gust. Photo: Kylie Gunn.

In the New Testament, the sound of a 'rushing mighty wind' marked the birth of the Christian church, on the day of Pentecost, recorded in the Book of Acts 2:2.

With the discovery of gold in 1867, families from the Wellesley St Baptist Church in Auckland came to the gold fields of Thames to witness for Christ. They began meeting as a Baptist fellowship in the cottage of Henry and Sophia Driver on Hape St, seated on planks laid across old blasting powder barrels.

They were led by William ‘Daddy’ Mason, known for his flowing white beard and his bag full of bibles and writing gear with which he’d traverse the mining claims among the hills to minister to the miners; writing letters home for many of those who were unable to write themselves, and distributing bibles to those who could read.

In 1869, they formed themselves into a church called Thames Baptist and later joined with the Congregational Church in Mary St, eventually purchasing it. 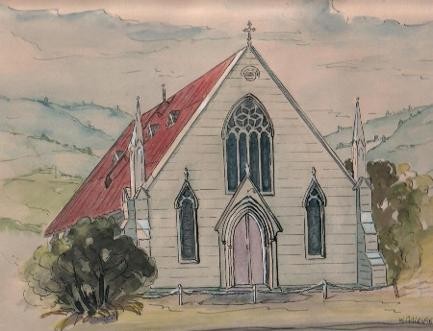 A water-colour of the Mary St. building before the church lounge was added on to the front. On the right of the building there is now a community ministries building, and there is a service lane on the left. Image: Thames Baptist Church.

Today, over a century later, Thames Baptist is home to a food bank which has been running through the lockdown levels. It is also home to the Living Well Trust which is considered to be the public ‘face’ of not just the Baptist Church, but to some degree the ‘church’ generally in Thames, having the support of public agencies such as WINZ, the Police, the Thames-Coromandel District Council, and health providers.

The trust operates the ‘305 drop in’ which provides free breakfast, tea and coffee Monday to Thursday from 9am to 12pm, which started again last week. The trust administers the Thames Foodbank and there is usually a free weekly community lunch at the church run every Tuesday on a three-week roster by the Baptist Church, Equippers Church and the St Francis Catholic Church.

“We’re at ‘Delta 2’, so when we go back to Alert Level 2 we’ll see about starting the lunches again,” says Chris. “On Wednesday the church moved to Alert Level 2, but the restrictions on numbers, physical distancing and mask wearing meant that normal gathered worship meetings couldn’t be resumed. The drop in at 305 was able to resume in the church lounge and the foodbank continued as it has during lockdown.”

The local community have been bringing in fresh fruit and vegetables to contribute to the weekly foodbank parcels.

Tomorrow the weekly sermon will appear on the church website, as it has been doing during lockdown. 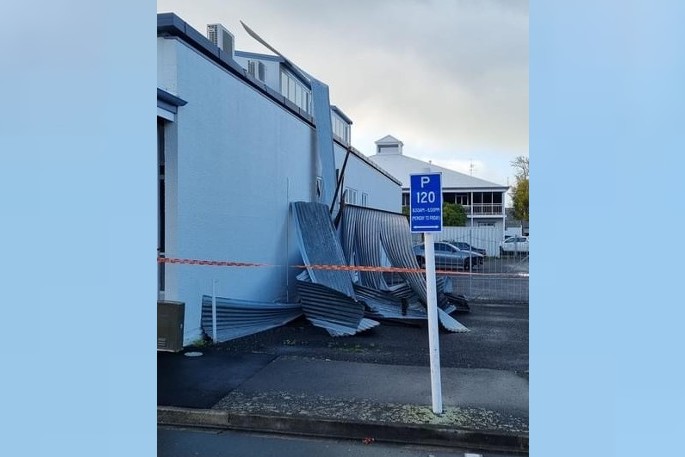 The iron from the roof of the Thames Baptist Church. Photo: Kylie Gunn.

The Living Well Trust also has a relationship with local schools, employing staff to run the Res Kids program in local primary schools, which covers the coast and northern Hauraki Plains. There is also a 24/7 youth worker at Thames High School, and a grandparents’ mentoring kids program run in conjunction with those schools.

This morning Chris found that the building hadn’t suffered much more than losing some of the roofing iron.

“There’s no damage inside which is good. A couple of puddles inside but we’ve been fortunate,” says Chris.

“Luckily the nature of the building being 110 years old means the wood was under the iron, so that deflected the weather.

“Our big concern at the moment is that the wind has taken off half of the eastern side of the roof. We’ve put it into the hands of our insurer.”