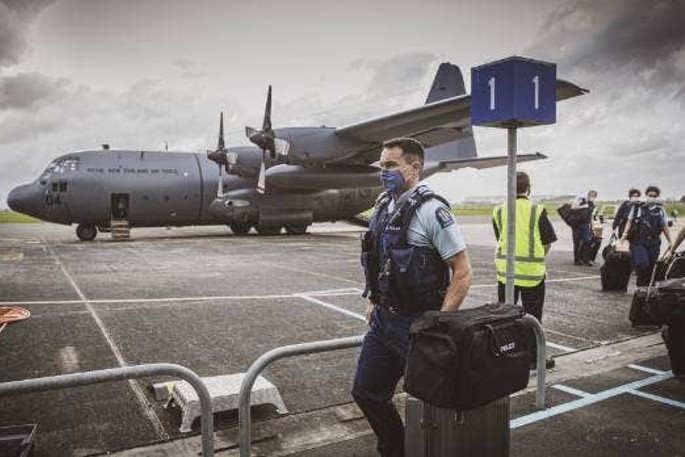 A total 45 staff from the Southern, Canterbury, Tasman, Central, Bay of Plenty and Wellington police districts made their way to Hamilton on Friday, 32 of whom flew in on a specially chartered flight. Photo: Christel Yardley/Stuff/Waikato Times.

Contact tracers are urgently investigating four mystery Covid-19 cases where officials don't know how or when the person caught the virus.

Experts say the unsolved cases could keep Auckland locked down.

Genomic testing suggests two cases in one household may have got the virus from someone unknown, while two people who tested positive for Covid at Middlemore Hospital have not been linked to other cases. Cabinet is due to consider the Auckland restrictions on Monday.

On Friday, the Ministry of Health reported 11 new community cases, all in Auckland. The total number of cases in the current outbreak rose to 879, of whom 288 have recovered. There are 27 people with Covid in Auckland hospitals, four in intensive care and on ventilators.

Seven police officers are in isolation after coming into contact with a woman who was tested for Covid at Middlemore Hospital on Thursday and returned a positive result. Thirty-six patients at the hospital were also potentially exposed to the virus after coming into contact with the woman. Staff at the hospital were wearing appropriate PPE and none had to be stood down.

Police from around the country arrived in Hamilton on Friday to help at the ten road checkpoints on the Auckland-Waikato boundary. Of the 45 reinforcements, 32 flew in on an air force C-130 Hercules.

The Government is downplaying any chance the trans-Tasman bubble could reopen soon. A Melbourne epidemiologist said the return of a full bubble would only be possible if both countries were vaccinated and accepted Covid in the community.

Vaccinated seasonal workers from Samoa, Tonga and Vanuatu will be able to travel to New Zealand without going through managed isolation and quarantine in time for the upcoming picking season, the Government says.

New Zealand's summer festival season is in doubt amid uncertainty over Covid restrictions. Tens of thousands of people are due to pack into party hot spots, but event organisers are concerned predicted tougher alert level 1 restrictions could see unworkable caps on crowd sizes.

Cafes, restaurants and bar owners around the country are anxious about the new level 2 rules, with some refusing to take on what they say is a policing role. University of Canterbury law professor John Hopkins says while businesses were required to encourage mask wearing, individuals were the ones facing prosecution if they refused to wear one without an exemption.

A Levin cafe owner says she has been the target of threats and online backlash after encouraging customers to question mandatory vaccinations and refusing to display QR codes.

A dozen Defence Force personnel are taking court action in a bid to keep their jobs despite declining to have Covid-19 vaccinations. Their lawyer, Christopher Griggs, said none of the group could be labelled “anti vaccine”, because they’d generally had every other injection required of them.

“The applicants are standing up for their fundamental freedom to decline medical treatment without then being treated prejudicially," says Christopher.

On Saturday morning Johns Hopkins University was showing nearly 223.6 million confirmed Covid cases worldwide, with more than 4.6 million deaths attributed to the disease, while about 5.62 billion vaccine doses have been administered.

Quarantine-free travel from Australia has been suspended.

The country outside of Auckland is at alert level 2, with masks mandatory for people over the age of 12 in more public places, such as libraries and malls.

People should use the Covid-19 tracer app.

To find support from people who care, connect with your community or help a neighbour in need.

... destroy the viability of the Elimination strategy. We have come so far, it is critical that these cases be traced. I’m sure every effort that can be made is being made but the whole strategy hangs in the balance if we don’t get this resolved. Let’s hope it is resolved quickly.

12 NZDF members are "standing up for their rights". I believe they are misguided. There is a time to defend your rights (and the rights of others) and there is a time when temporary compromise is required. (Like a whole nation is at risk...) We are in the latter. A dishonorable discharge would be a high price to pay for making this issue at this time. Refusing the vaccine is putting their comrades at risk and no serviceperson wants to do that. They should be given full information on the Pfizer vaccine and the nature of mRNA vaccines in general. If their decision is still not to have it, then there is no option but to discharge them. It is their choice and they must be allowed to make it. When I was a soldier we received around 30 vaccinations preparing for Viet Nam. No-one objected...