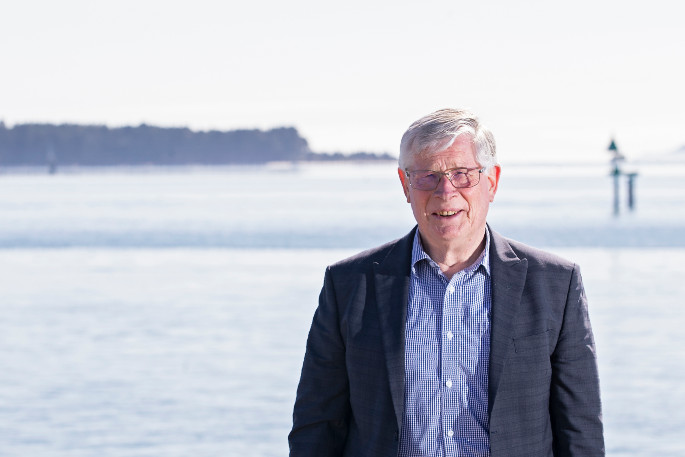 Western Bay of Plenty Mayor Gary Webber has called for patience from residents as a storm brews regarding Three Waters Reform in Tauranga and the surrounding region.

Webber’s plea comes as various ratepayer groups in the Western Bay and Tauranga communities call for more transparency, with some even suggesting a referendum is necessary to make the decision.

The Government is currently asking for feedback from Councils regarding plans to transfer management of New Zealand’s three water services - drinking water, wastewater and stormwater - from the 67 local councils to four regional entities.

Western Bay of Plenty District Council and Tauranga City Council would fall into the newly formed Central North Island entity with councils from Waikato, Bay of Plenty, Taranaki and parts of Manawatū-Whanganui joining them.

Some ratepayer groups have shared disappointment with the plans, suggesting major rates-funded assets and infrastructure risk being lost to central Government.

Keith Hay, secretary for the Waihī Beach Residents and Ratepayers Association, is displeased at what he believes is a lack of consultation from WBOPDC.

“It is extremely disappointing that Council refuses to consult with their ratepayers as most other councils are doing,” he says.

“They don’t have a mandate from ratepayers to make any decisions on Three Waters without consultation.”

Both the Papamoa Residents and Ratepayers Association and the Mount Maunganui Residents, Ratepayers and Retailers Association call on a referendum regarding any Three Waters reform in Tauranga City Council areas. That mindset is also backed by the Tauranga Ratepayers’ Alliance.

In the Western Bay, Mayor Webber has taken to the Council’s Facebook page to address concerns. He highlights the fact that, at present, participation remains voluntary and that WBOPDC are not yet in a position where a decision has to be made.

“Right now we are not being asked to decide to opt in or out of the reform,” says Webber.

“Like all councils, we've been given an eight-week window to study the Government's proposal, understand the likely effect it would have on us and provide feedback to the Government by October 1.”

He says WBOPDC’s concerns and questions over the reforms vary, including undertaking an analysis of Council information to assess the impacts of Three Waters and comparing the reform scenario to that in which Council continues to deliver water services.

“This analysis covers several areas including service levels, finance and funding, workforce and capability, and social, community and economic well-being,” he says.

Webber says he understands why the community has a vested interest in how the area’s Three Waters services are delivered.

However, with the Government still waiting for feedback, not an opt-in, from councils, it is not yet the appropriate time for extensive community consultation.

“Many of the details of the programme are still unclear, including whether participation remains voluntary,” he says.

“Which is why it is too early to ask you what you think.

“Remember, the reform programme is led by the Government, not by councils. We’re still receiving information on the reform proposals because we still have questions about it. Fortunately, we have not yet been asked to make any final decision.

“So before we can have a community conversation, we need to understand the final proposal, what opportunities, risks and trade-offs it presents, and what decision councils are being asked to make.”

He says that further information from the Government is expected after councils have given their feedback, sometime after October 1.

At this point, he believes a clearer picture of what Three Waters reform will entail for the Western Bay region will be apparent, allowing for feedback from the community.

“While there is still uncertainty about the final outcome I can assure you that our communities will be a part of the conversation when the time is right,” says Webber.

The governance proposal is not democratic nor on merit but on racial appointment . It’s a nonsense. Water is not, nor should be owned by anyone nor controlled or priced by race . This centralisation model takes away local assets and local control of the infrastructure owners that’s us the ratepayers.

Mahuta is implementing a policy that suits her. Ardern’s Government is not just allowing it, but actively encouraging it. It has to be done behind closed doors because most of us would never stand for it. The days when we had a voice in a Democratic process are being stifled. Maori Wards were the thin edge and He Puapua is the full package. Our ONLY hope is to change the Government at the next general election, but unless a lot more people "wake up" that is a slim hope. It isn’t even about Left or Right; it is about the fundamental right to a referendum that must be binding, in order to keep ANY Government honest. If we let it go, we are abandoning the nation to vested interests and shady oligarchs hiding behind political correctness.

Billions of dollars ratepayer owned. If government was serious they would support councils with our taxes not Rob Peter to pay Paul just like the it’s not tax charges on Ute owners lol. Ratepayers are paying more than enough. This socialist has lost confidence in Labour and after a lifetime voting for them just can’t on so many issues ever again .

These assets have been paid for by the ratepayers over many years. Councilors are voted in to look after them. Under all council laws in New Zealand, the sale of significant assets must go to a referendum to the ratepayers. With elections coming up soon, all ratepayers should take note of those councillors that think they should not have to do this and vote them out.

for the health and general safety of our fellow New Zealanders exhibited in these comments, is both disgusting and expected from the far right. City dwellers generally get their water from rural areas at next to no charge yet grizzle at a little cross subsidisation for those monetarily poorer areas. You should all be ashamed to call yourselves Kiwi’s, It’s all about self greed and heartless disregard for the greater good. As for Muriel Newman isn’t she the failed polly who advised the failed 1law4all party? I think you’ll find she is, LGR.

The end of Democracy

Mahuta has already stated that she is more than willing to change the law so she can grab these assets. That in itself should have us all rioting in the streets. As for Mayor Webber’s call to keep calm, we should all be doing the opposite. The ads we are seeing on TV are nothing short of propaganda. There has been nothing on there explaining the real truth behind 3 Waters. The Scottish model this government has touted is in fact a huge failure in Scotland. To mayors of other councils fully explaining what is going on, such as the good mayor of Westland posts on YouTube, only to have ours state that we should take a chill pill is extremely disappointing. 3 Waters in simply a CON.

Council will never listen or take advice from the people that pay their wages and expect us to vote for them. Council has an agenda which is the protocol to appear to be sympathetic to the "People that pay their absorbent salaries" (Their employers), to PRETEND. Pretend to LISTEN and act on the wishes of us who pay them so we get totally ignored because they think they are unaccountable Gods and know better than us humble rate payers. WE LIVE HERE!!!. We know things aren’t good. Council, If you think this is going to be yet another "Gloss over" easy ride, it’s not going to be. We will keep making noise and be on your case. It will be a revolution. You can’t fool all of the people all of the time!

Will you have a choice ?

This is the float the idea phase before the democratic right to have a say AND THEN BE IGNORED.

“While there is still uncertainty about the final outcome I can assure you that our communities will be a part of the conversation when the time is right,” - I can tell you right now what the outcome will be. How come you can’t? I’ll put my house on it! Council will do what govt wants. Not rate-payers. Which is why some are calling on a referendum right now obviously.

I see more media releases on three waters coming into play from the hugely expanded government communication departments. The words cross subsidies raises it’s head. City folk must subsidise rural areas struggling with lower rates income for better water systems. Isn’t that what government taxation for then ? So rate payers who buy the water will in effect pay more ? 22 percent on rates this year followed by water increases. Bit like taxing Ute owners, farmers , tradesman, recreational etc more even though no alternatives to pay for electric vehicles that richer people buy. Also plugging into a power grid burning a record tonnage of coal imported for 12 percent of total generation over winter. Go figure ..fly to Europe to tell them how great we are and how naughty they are to dig up coal to manufacture stuff we buy Haha

not much use having a referndom, mahuta will just change the law and do what they want

Whether you agree or not

Finding the truth is never easy under current circumstances. Whether you agree with the general stance taken by Leighton Smith or not, can I suggest that a few minutes be spent listening to his podcast number 127 and an interview with Dr Muriel Newman from the NZ Centre for Political Research. Or find political research information from the same website. The potential effects of wholesale change are astonishing under the current political regime. Given the chance to vote in relation to giving up control of our ratepayers assets, I will be voting NO. And maybe that’s why we may never get to vote on council actions that are becoming more and more based on racial identity rather than capabilities.

Our councils are a law unto themselves. They do not listen to ratepayers. Can’t see the present commissioners going against the will of their party!