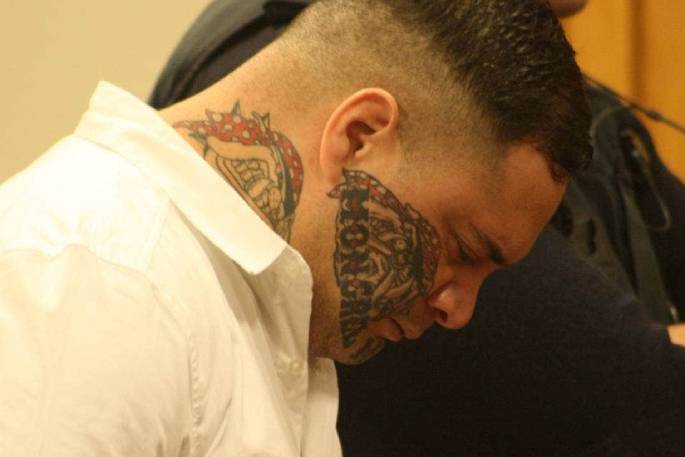 Details of the horrific domestic violence suffered by Samantha Shaylani Reid in the lead up to her murder can now be revealed after her partner, Darkie Thomas Cable, pleaded guilty to her murder.

Cable was due to stand trial for the killing at the start of August, but on what was meant to be the first day of a two-week trial instead opted to plead guilty to the murder, committed in Taupō on January 25 last year.

Stuff can now reveal details of the violence Cable unleashed against his partner of 13 years, and the mother of his two children, after obtaining the police summary of facts.

The first charges relate to an incident that took place on Boxing Day 2019 at Reid’s parents’ Maketu address, which began when Cable started arguing with Reid “over trivial matters”.

The summary notes Cable dragged Reid outside by her hair before assaulting her in front of their family and friends.

“The assault began with the defendant punching the victim in the face with a closed fist. The punch was delivered with such force it caused the victim to stagger backwards and fall to the ground.”

Reid was subsequently dragged up by her hair before being punched in the face another three times, with Cable threatening witnesses who tried to intervene.

“Stand there and watch,” he told the witnesses.

Further punches and kicks followed before a neighbour confronted Cable, allowing Reid to escape to a relative’s property.

“The defendant re-joined the Boxing Day celebrations, however, the victim’s absence did not go unnoticed by him.”

Cable then went to search for Reid, before she returned to the property, with Cable later returning to find her being comforted by a cousin.

He said “f... you bitch” before launching into another assault, with a punch “delivered with such ferocity it sent the victim’s head through the wall cladding causing the wall boards to splinter”.

Further punches and kicks followed before the police, who had been called by Reid’s cousin, arrived.

“When requested by police to come outside the defendant declined, opting rather to jump out a bedroom window.”

With the police looking for Cable, and with him no longer welcome at Reid’s parents, he moved to a Taupō address with Reid and their children.

It was at that property on January 25 last year that Cable “became enraged with the victim over a minor issue”.

That resulted in further assaults, with Reid’s screams heard by their children.

“The 11-year-old described his father possibly using a wooden post to hit his mother,” the summary said.

Cable then left an unconscious Reid to ask relatives living nearby to provide aid, instructing them and his children “to tell emergency services personnel that he wasn’t there and that the victim fell off the deck”.

Cable then hid until later telling paramedics Reid “had been drinking quite a bit lately and taking Marijuana”.

Reid was airlifted to Waikato Hospital and placed on life support.

“Due to the non-survivable nature of her injuries her life support was turned off and the victim died on January 26, 2020.”

On the day she died Cable spoke to police, telling them he was not present at the time as had travelled to “attend to his cannabis plants”.

He declined to comment on the Boxing Day assaults.

Cable, who has previously appeared before the court, is set to be sentenced at the High Court in Hamilton on November 19.

You responded well telling us what a bad man he is and the bad choices he made. That was self evident. You misinterpreted what I said and I agree you never called him "worthless trash"; I was trying to cover a "general attitude" as an immediate reaction by most people. (I know you are a decent man and would not take that approach). The point I am really concerned about is whether there is shared concern over Family Violence and a willingness to do something about it, or do we just show our outrage at the actions of people who perpetrate it? You didn’t address that at all.

Under no circumstances whatsoever did I call him worthless trash, or would I call anyone worthless trash. He is a person (the word I did use) like you and me and unfortunately, like you and me, he has made some bad choices. The outcome of HIS choices has been very shocking indeed and just because it is family, they are still victims as would the next possible person be. Because it’s family now doesn’t mean it’ll be family later.

You have no reason to believe he would be "looking for another victim"; his offenses were all within the family. Similarly, you cannot know whether his remorse is genuine or not (Neither can I, but I choose to give him the benefit of the doubt...) The bottom line is that Family violence needs to have a lot more done to root it out and eradicate it than simply saying: "worthless trash, put him away for ever..." Nobody is BORN worthless trash. And I did say that his behavior requires the punishment of the law. I’m not arguing the effects on his whanau and children. I’m simply saying that we, (as a Community), need to do more prevention, because there is no cure once the rot has set in.

Would he be bowing his head in shame and looking remorseful if he were not in the dock. Guaranteed not. He’d be out there looking for his next victim. He’s only remorseful that he got caught, that somebody had the courage to stand up to him. Remorsefulness for sentence sake. Families have been destroyed by this person and kids subjected to things they should never see. The ramifications of his behaviors is far, far reaching. Ripples in a pond.

I enjoy the gentle good sense in your posts and once again you have nailed it: "The chain needs to be broken." It does indeed, and I think it has to start with our schools and young people. If we tolerate bullying, if we glorify violent settlement of disputes, we are fostering behavior that can lead to this. In the home, parents have to set the model that their kids will emulate. No hitting, or screaming abuse, or intimidating, or trying to dominate by physical power. Yes, we all get angry, and yes, there will always be issues, but we have to find better ways to deal with it. People who love each other don’t bash each other. Your partner is NOT your property, to be beaten when you are upset. And don’t think kicking the cat or dog is OK either... I agree also about the bystanders... surprising.

How can someone come to this?

I refuse to judge this man, only his behavior. For that he must pay, in accordance with our laws. And I agree with others here that they should be stronger. Until we find a way to address the root causes of WHY somebody would think that this is OK behavior, until we stamp out the cult of the "bash" as a solution for settling issues, we are condemned as a society to see this tragic waste of life and energy being repeated. Family violence is NOT OK and if you feel that you are being driven to uncontrollable rage, seek help at once before it becomes tragedy. There are no winners here and we are all diminished by it. There is no mana in beating women and children, or even a weaker enemy. The picture shows a man in remorse. It is too late. A family destroyed.

Throw away the key

The sad part is that there were witnesses that did nothing to help the lady. No one rang the police in the first assault. They should also be charged. And as for the children that have grown up with this violence and witnessed these acts of a coward, I really hope that the whanau that they are now in the care of, is not just more of the same, but can help them heal, and realise this is not how you treat people you love and respect. The chain needs to be broken or else they will grow up believing that a man can treat a woman like that, and a woman has no option but to accept the treatment. So very sad.

Another oxygen thief that doesn’t deserve to return to any community. Maybe our lawmakers should be made to come down from their ivory towers in safe communities and live in underprivileged areas of the country where these degenerates rule the roost through violence and threats. Just Visiting a community will never reveal what living there will.

What a tough dude. He can smack-over women in front of kids. You’ve given them ALL a life sentence. You’ve gone guilty saving them the agony of a trial for what you made them witness at your hands but more than likely only to make yourself look better for sentencing.

People who behave like that do not deserve to ever walk free again.

Our law says "Offenders sentenced to life imprisonment must serve a minimum of 10 years imprisonment before they are eligible for parole". Why are our laws so soft on this issue ?