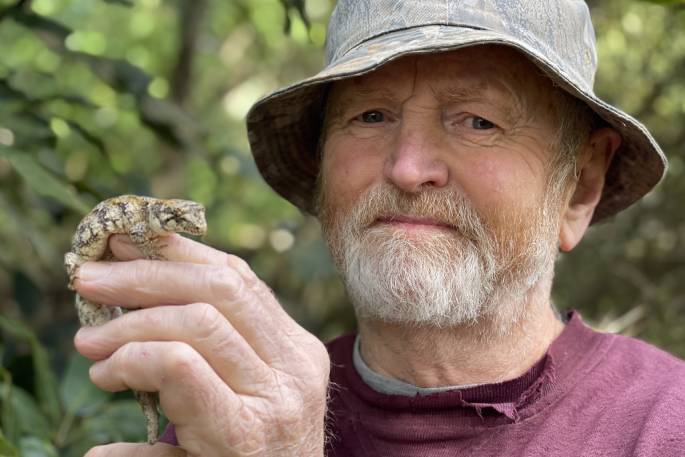 He’s known as the “Lizard Man” and, after 30 years talking about lizards and geckos, Doug Ashby’s comfortable with the superhero-style moniker.

The retired teacher is a popular figure around the Coromandel and Hauraki districts, sharing his love and knowledge of New Zealand’s lizards and geckos with wide-eyed school children, as well as many of the wider Coromandel region’s community groups.

New Zealand has more than 100 species of lizards, including gecko and skink species found only in this country.

They face threats from introduced predator so Doug with his wife Jane work to raise awareness of the need to protect them.

The self-described amateur herpetologist is a conservation hero through his voluntary work, usually with Jane.

He says the couple take fewer education and engagement sessions than in the past but it still gives them a great deal of joy.

“It’s slightly gimmicky to be the “Lizard Man’ but the primary school kids love it, and they’re the ones we focus on,” Doug Ashby says.

“The primary school kids are so spontaneous and it’s just delightful. It’s a bit of a biology lesson, and we try to knit it all in with what we’re doing with the lizards – it’s a hands-on episode, really!”

Children have an energy and enthusiasm for nature which Doug and Jane still enjoy, and the couple tweak their sessions based on the age group of the children they’re presenting to.

With a permit from the Department of Conservation to hold native lizards and geckos they have gradually downsized their collection from a peak of about 100 specimens to 50 individuals across seven different species.

Some individuals in the collection are more at ease in the public gaze, so get more frequent outings as part of the educational visits.

“We’ve got about four lizards who are old hands, and they’re quite comfortable being taken around.”

The “Lizard Man” journey began when the couple took lizards along to show students at their own children’s school – Puriri Primary.

“It’s just gone from there – we thought ‘well, we’ll offer it to other schools’, and what we find now is we get rung up and asked to come along and talk,” Doug Ashby says.

Over the last 30 years they’ve educated thousands of school children, and now prefer to deal with groups of about 25 students to make things more manageable and interactive.

“We do shorter and simpler classes now, at about four schools a year,” he says.

There’s a nice synergy between the educational visits and Doug Ashby’s initial interest in lizards and geckos – he was a 12-year-old student at Waihi Intermediate when he got his first gecko, which followed childhood enthusiasm for frogs.

He’s now 75, and still holds the same passion, settling on Duvaucel’s gecko as a favourite species. He says Duvaucel’s are popular with many lizard and gecko keepers because of their size: “They’re a fantastic and fascinating species, and their size sets them apart from others.”

Maree Limpus, one of the Department of Conservation’s Hauraki District Rangers, works closely with Doug on community education and engagement events, and describes him as “absolutely amazing”.

“He comes up to present at the Kauaeranga Visitor Centre any time we ask him, and he loves working with groups of any sort,” she says.

“I’ve learnt a lot about these creatures from spending time with Doug. He’s really great with people and his teaching background shines through.

“The love he has for the animals is communicated superbly through his volunteer work. He creates an emotional response with the people he presents to and that’s a special skill.”

So, does Doug consider himself a conservation hero? “Oh look, no,” he says. “I’m a conservationist through and through… but we’re just trying to do our thing, and of course we really enjoy it.”

For more information on www.conservationweek.org.nz