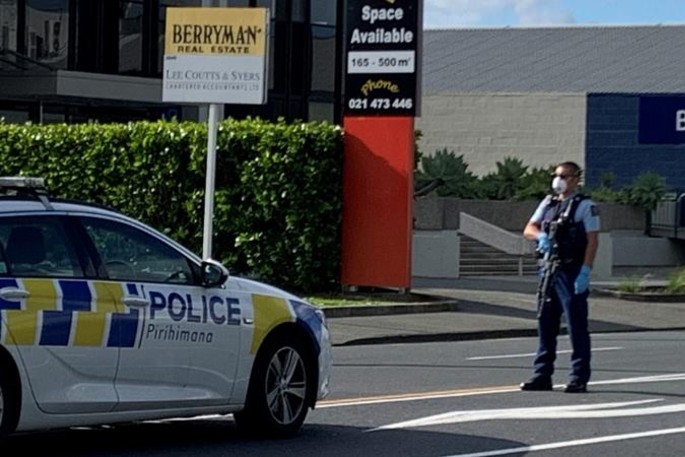 Police at the scene on Friday. Photo: RNZ / Veronica Schmidt.

Police continue to investigate the events surrounding Friday’s horrific LynnMall attack, and are providing reassurance patrols in the New Lynn area and around the country.

Another person remains in moderate condition at Middlemore Hospital.

"I can now confirm that five of the six victims transported to hospital had been stabbed, and one had suffered a dislocated shoulder," says Commissioner of Police Andrew Coster,

"Overnight [Friday], we identified a seventh victim in this attack, who received a minor injury which he treated at home.

"This man narrowly avoided more serious injury when he evaded the attacker."

The victims are four women aged 29, 43, 60 and 66, and three men aged 53, 57 and 77. Our thoughts remain with the victims of this horrific attack and their loved ones, who will be suffering great anguish.

"We wish to preserve the victims and their families’ right to privacy at what is obviously a distressing time."

Police can now provide more detail of the events surrounding yesterday’s attack and can confirm the attacker travelled by train to the supermarket in LynnMall, arriving just before 2.30pm.

The surveillance team following him observed him taking a trolley at the supermarket and begin shopping as we had observed him doing on previous occasions.

He was shopping as normal for approximately ten minutes before the attack started.

As noted on Friday, it was around 60 seconds from the time the surveillance team became aware of a commotion to when they engaged the attacker and shot him, says Police Commissioner Andrew Coster.

"Following a review of the in-store CCTV footage we now know that the first victim was stabbed approximately 60-90 seconds before the surveillance team heard shouts and saw people running.

"I want to reaffirm that our Police staff showed great bravery and professionalism in their response to this attack.

"They acted in exactly the way we would have expected them to in this situation, given they were following an individual who had a high level of paranoia about surveillance activity."

Suppression orders remain in place, restricting what additional information Police can release regarding the attacker at this time.

"Our intention is to release information as and when we are able," says Police Commissioner Andrew Coster.

"I also want to acknowledge those other people caught up in the attack – the staff at Countdown LynnMall and other members of the public who were present, either in the supermarket or in the surrounding mall area.

"This will have been an incredibly shocking and distressing event for all involved."

An extensive scene examination at LynnMall is continuing, along with collation of CCTV footage and witness statements.

"New Lynn residents can expect to see a continued police presence in the area, as the investigation team works at the scene and officers conduct reassurance patrols.

"We have also undertaken to have heightened visibility at other supermarkets and similar locations where people may gather."

Anyone who witnessed the incident who has not yet spoken to Police is asked to get in touch via 105, quoting Operation Rally.

"We would also like to hear from anyone who has photos or videos."

An online portal has been set up and this can be accessed at https://rally.nzpolice.org

Big effort now to plug the gaping holes in terror laws that were highlighted years ago. I suppose now they’ve thoroughly debated whether ties should be worn in Parliament they’ve got a bit of free time.

So he was attacking people for one and half minutes before the “surveillance” team began their 60 second dash to the scene. That is not close surveillance in any way, shape or form. Shocking.