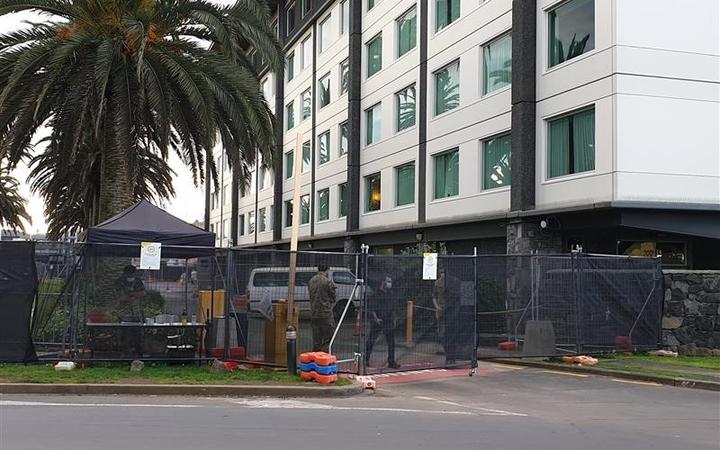 Managed isolation and quarantine officials have revealed the man who fled a quarantine hotel in Auckland early yesterday morning left his room three times before finally making his escape.

The man, who is infected with Covid-19, was arrested hours later at a house in Ōtāhuhu and has been charged with failing to comply with a health order.

It was his first night at the Ellerslie hotel and MIQ officials said CCTV footage showed he left his room three times between 11.40pm and just after 1am.

On the last occasion he went down the fire stairwell and made his way to a fence before hiding in a bush then making his exit.

It is not clear how many people he came into contact with, although the government says work to establish that so far indicated it was "very few.”

The man is now at the Jet Park quarantine facility with a permanent guard outside his room.

Joint head of MIQ Brigadier Rose King told RNZ’s Morning Report MIQ was working through an investigation to find out what happened.

"I still have to wait for that investigation to come back,” she says.

"The individual arrived at our location at 6.15pm on the night of the 1st of September and as part of our procedures we do a risk assessment.

"This has had a number of agencies that have worked through this. Our focus is when someone arrives at our facility and that's what I'm focusing on - what actually happened in our facility? Did we follow our procedures and did we do the right thing or are there things that we can do to improve this.

"So what I can say is in regards to our CCTV footage, we do have the timing of when the individual left his room and moved from his room and went out the fire escape and approached the fence.

"He then hide from a security staff member and then left our facility.

“I do have a timeline for that, which I'm happy to discuss with you. The other details about what happened, what our staff did at that time - I still have to wait for that investigation to come back.

"As part of our procedures we do have CCTV and all of our facilities, but again, I am trying to confirm what happened in this case."

Deputy Prime Minister Grant Robertson told Morning Report “Everyone is disappointed by what's happened here, but there are strict security arrangements at all of the quarantine facilities, and I'm sure the person will be being well looked after.

"Part of the rules around the way MIQ works is that there is a facility for people to be able to exercise with very close supervision.

"If you are in a quarantine facility, individual decisions like that would be made in the particular instance, but you know, we do try to make sure that people are able to get some exercise and fresh air.

"There would be – as there is for anybody who goes undertakes exercise in the quarantine facilities as opposed to the broader managed isolation ones – they only take place with close supervision with people wearing PPE, but individual decisions like that will be made by those who are running the Jet Park, they obviously have had a lot of experience in working with people who have Covid so I would leave those decisions up to them.

"I can confirm the timeline that you've just mentioned –  that was identified by going back and looking at the CCTV footage and one of the issues that no doubt those who run our managed isolation facilities will be taking up as whether or not that CCTV is being monitored 24/7.

"At this stage it's deemed to be relatively low risk.”

The man was identified as missing the next morning when other members of his family who were also in the facility raised the issue about 10.30-11am, Robertson says.

“Shortly after, police were notified and the person was found about early afternoon.

He says the facility had been operating for MIQ "for some time now”.

"So therefore it has the security arrangements that we would expect for that. We have very high standards of security for all of the facilities, and that includes things like double fencing and cameras.

"So at this stage it's deemed to be relatively low-risk, but it is being worked through to see what contact he may have had.

"The prime minister was given a sketchy set of details of an incident that it was taking place – bear in mind it was a live police operation at the point where the prime minister was told just before the 1pm press conference – and I think it would have been irresponsible, while a live police operation was underway, to go down and speculate about that.

"Information is being released as soon as it's possible to do ... and it's important while the police are doing their job that we leave them to do that."

"There's probably not enough security and not enough use of CCTV on the night in question.

"But I think it was concerning that you know, he left his three times, that wasn't picked up by CCTV and wasn't picked up by security and I suspect one of the underlying reasons is that the Novotel Ibis Hotel Ellerslie has only just been converted into a quarantine facility, literally in the last couple of days.

"This man was in quarantine, so he was Covid-positive. Now normally people like him get sent to the Jet Park.

"That's been well used for a year or so because we've got so many Covid-positive people in the community in Auckland at the moment they're having to stand up other facilities.

"We've got the Holiday Inn coming online and then Novotel's just being converted into it and I suspect and I think the review will probably show us that the security protocols that are in place at the Jet Park are probably not in place at the Novotel.

"There's probably not enough security and not enough use of CCTV on the night in question."

He does not think round-the-clock monitoring for people like the escapee was unreasonable.

"The evidence shows that this particular person had absconded from his home isolation, for example beforehand, and had some very, shall we say, extreme views in relation to vaccinations, for example.

"So I think reasonable people would say that this is something that should have been to the knowledge of the authorities and maybe should have been some extra steps taken for him when he was in quarantine and we need to know exactly what happened here."

If someone presents at the facility with a negative attitude, it should be noted, and they should be especially watched. This guy had all the flags and yet the CCTV was not monitored. 16 absconders out of 170,000 shows that most people realize the need for isolation and accept it, but we have seen that you only need ONE person to bring thousands of people into lockdown and destroy the hard work being done by many. Comments by the Prof and Bob Landy are fair and pertinent. I agree...

The Government should be charging this moron for the guard who now has to stand outside his room.

Let’s get proper security on MIQ. What’s in place clearly doesn’t work. Putting him in another hotel is not the answer. He should now be in a secure cell. As for being charged with “failing to comply with a health order”, that’s a joke. It should be attempted murder.