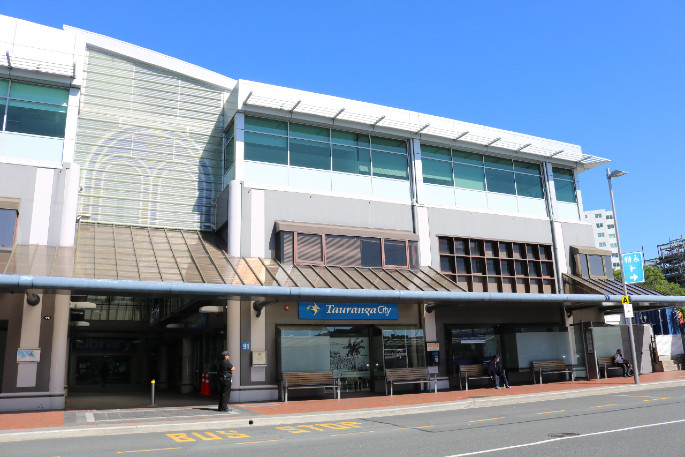 The group were arrested outside Tauranga City Council on Tuesday. File photo.

Six people have been arrested following a protest in Tauranga.

Police were called to a gathering of people outside the Tauranga City Council chambers on Willow Street on Tuesday morning.

Police Commissioner Andrew Coster says the Tauranga protest was one of a number police responded to on Tuesday.

"Police responded to anti-lockdown protests involving small groups outside government and local council buildings around the country, resulting in 19 arrests for failing to comply with Alert Level 4 restrictions.

"The protestors were spoken to by police at each location."

In Northland, two people were arrested – one each outside the Kaikohe and Whangārei council buildings.

The Whangārei protestor was subsequently released and issued with an infringement notice.

In Auckland, four people were arrested at a small protest outside Government House in Epsom.

Waikato Police arrested three people for failing to comply with the Health Order after responding to a group of protestors gathered in Civic Square, Hamilton.

Six people were arrested by Bay of Plenty Police following a gathering outside the Tauranga City Council building.

"Another small gathering was reported in Taupo, with one arrest made," says Coster.

Two people were arrested at the Whanganui protest.

A demonstration also took place outside the council building in Nelson.

"Police engaged with protestors and no arrests were made."

In Christchurch, one person was arrested following a protest also outside a council building.

While these protests were small, the actions of those involved are very disappointing, says Coster.

"While protest is a normal feature of a well-functioning democracy, Police have a low tolerance for anyone who deliberately ignores the restrictions in the current situation.

"The alert level is in place to protect us all and we need everyone to do their part."

Yes, I guess it is down to interpretation. I see this Marx quote more as a reference to ’all for one and one for all’ even though I don’t see him as a ’Musketeer’. I believe he was pointing to the need for the social collective rather than the individual interest which is why I considered it apt on this occasion. Like you, I prefer to take responsibility for my being. Successes and failures are equally mine but I remain grateful for my starting point for development and can only speculate on my outcomes if circumstance, social modeling and the morals and values I was instilled with had been different. We are all products of our environments and we can only be autonomous with the tools we have been given. Most appropriately, on Father’s Day, I see my Father in most everything I do.

Thanks for a reasoned and interesting response. (Sadly becoming increasingly rare here... :-)) I’ve never thought of Marx as a "great man" and I had not seen your quote before. But, on reflection, I think he was a GOOD man, and that is maybe even more important. I agree with his philosophy of "from each, according to his ability, to each, according to his needs..." (even though experience has shown that, Human nature being what it is, it is not viable...), but I don’t agree with your quote. I believe that we each determine who and what we will be and the responsibility lies with each of us. It is too easy to blame social circumstances; YOU are responsible for the condition that YOU are in. Not your partner, your Boss, the Government, your whanau, or anyone other than yourself.

Yes and I share your feelings on this too. I understand the analogy and the generic fear of the ’police state’ but ultimately, gathering in groups to protest against communism was not going to affect the health and well being of the wider community or possibly the whole country? Personally, I am a big fan of individuality and self determination but I don’t want to see anyone’s rights to those things upheld during a pandemic. You can hold tight to those things when you are the only one likely to be affected by your decisions. As the great man once said "It is not the consciousness of men that determines their being, on the contrary, their social being that determines their consciousness".

I share your feelings about this, but be careful. Back before the collapse of the German wall, I was in Prague University getting a tour from a friend who was an English lecturer there. She proudly showed me the bust of Karl Marx in the Psychology department. I commented on the absence of expected works by Jung and Freud. And she said that "Psychology" was about fixing attitudes in people who were against the system. The bottom line was that anyone who protested must be crazy because they couldn’t see how wonderful Communism was. Some "therapy" and time in a Gulag was just the ticket to "help" them. I hope we never become those guys...

You cannot legislate for stupid. Some reject compliance on ’principle’ even when it is clearly for their own and everyone else’s good. Others prefer to see them selves as visionaries, able to see through deep seated government conspiracies that they have created in their own heads. Then of course, there are those that outright deny that Covid even exists! These ’protests’ are a clear indication that our government are quite right to be investing more money into mental health. If you are arrested when protesting against lockdown, not only should you be made to comply with lockdown requirements but a mental health assessment should be mandatory too.

I have seen loads of people breaking bubbles. Particularly youths meeting up with mates in parks and on the seafront. But half a dozen people protest and it gets Herr Coster and his troops full attention.

Hopefully the courts throw the book at them good and hard. Give our Police the backing not the idiots.