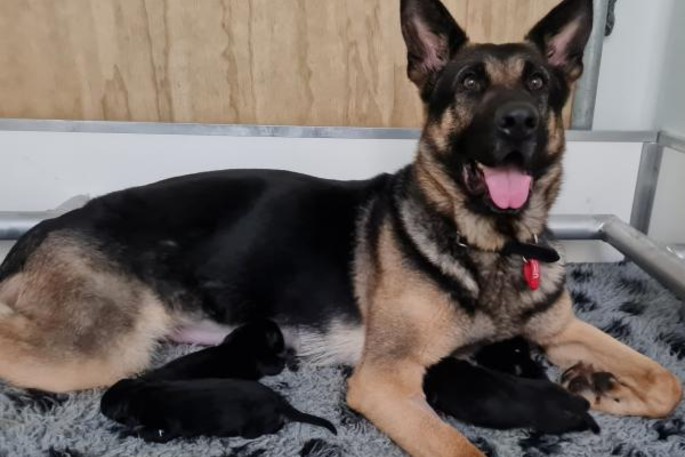 Congratulations are flowing for Jax the New Zealand Police dog on the safe delivery of her first little of pups.

The litter, known as 'the W litter' were delivered during Alert Level 4 lockdown.

"The first time mum gave birth to two males and two females via emergency C-section on Sunday August 22, and, as you can see from the video, they're all doing beautifully," says a Police spokesperson.

The pups have a long way to go until they're operational, but the odds are in their favour.

"Their dad, Dan, was a patrol dog in Dunedin, as was Dan's dad and the pups' grandad, Ajax."

Sadly, Dan died from a medical event in June 2018, but through the W litter his legacy lives on.

Being W litter one of the dogs should be named Willie so when a crim is scared and says will he bite me . . . he gets bitten . . . HAHAHA

May these pups grow into a long and successful career with Delta. If I had my time again Delta would be my choice of career. @ morepork, hahaha. I saw your headline ’Disgraceful’ and thought, what the. Well done. Hahaha To Delta, thank you for your work. You guys are awesome.

I thought we got fined for littering... Seriously, great to see such a lineage being continued.