Risk of Covid spread too high for full bin service 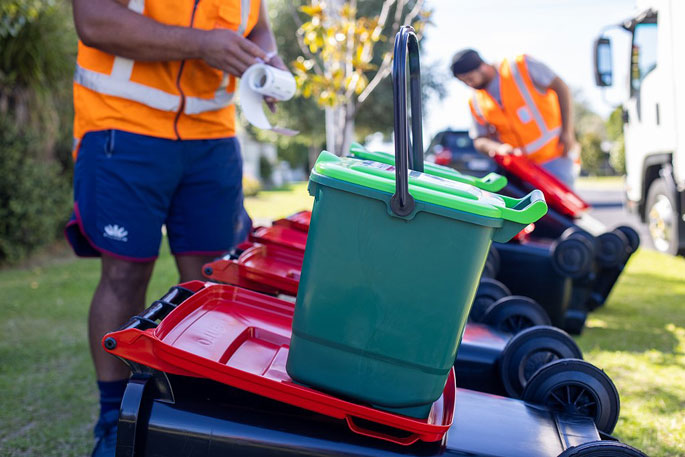 Residents in Tauranga and the Western Bay can expect their kerbside collections to return to normal when New Zealand drops down to Alert Level 3, according to both Councils.

However, at present, the potential for spreading Covid-19 is considered too high to do so, with increased collections costs meaning no refund for any change to the rates-based service is likely.

Tauranga City Council put a hold on food waste and glass bin collections, as did Western Bay, who also confirmed that yellow bins will go to landfill under the current restrictions.

Both councils suggested at the time of the announcement that any sorting by hand made these services difficult to sustain safely during the current community outbreak of the Delta variant in New Zealand.

However, some residents have expressed disappointment at the decision, with the implementation of the relatively new service already contentious since its July inception.

Now, both Councils have explained further why the changes to the service had to be made.

Tauranga City Council’s sustainability and waste manager Sam Fellows says he understands how frustrating the changes must be for residents. However, he says every precaution must be made to keep workers and the community safe.

“As food scraps and glass bins are collected by hand, as opposed to by truck, this poses a health risk,” says Sam.

“Drivers could potentially spread the virus from bin to bin unless they changed gloves after each collection, which is not feasible. Glass and food scraps also contain saliva residue, which would put our drivers at risk.”

He says that food scraps and glass collections will be collected once again should New Zealand drop to Alert Level 3, with Te Maunga Transfer Station also reopening at that stage.

A decision on Alert Levels is due in this afternoon’s post-Cabinet meeting at 3pm.

“Until this time, we encourage residents to store their glass until it can be recycled again, and to consider what really needs to go in the rubbish bin,” says Sam. “Of course nappies and food scraps will need to be disposed of as soon as possible, but things like soft plastics or packaging could be stored until Alert Level 3.”

Western Bay of Plenty District Council deputy chief executive and group manager of infrastructure services Gary Allis says the health and wellbeing of employees, contractors and customers is the priority. 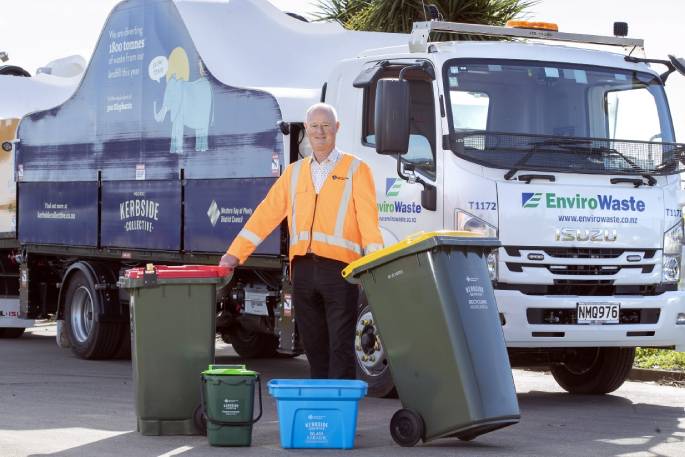 “Given the highly contagious nature of the Delta variant, PPE such as masks, gloves and hand sanitiser would not guarantee the safety of operators, even if changed or sanitising between addresses,” says Gary.

“An infected operator could go on to spread Covid to every household on their route for the day.”

Gary also details why residents cannot expect a refund on the services impacted during Alert Level 4, stating that costs have actually increased for Council in lockdown, due to facility closures.

“There is no plan to refund residents on affected services,” he says.

“We note that while the processing of some kerbside materials has reduced, Council cost for disposal has increased, with recycling facilities temporarily closing, and having to divert collected recyclable materials to landfill.”

Sam also states that Tauranga City Council are not currently planning on offering refunds to residents due to the “collection costs involved” during Alert Level 4.

The cost of the full kerbside collection is roughly $4 a week.

I enjoyed your post and remember the times you describe. Thanks. However, there is ONE thing I would respectfully ask you to clarify, please: I have never seen KAREN used in a pejorative way and would be grateful to know how you might explain this. (All the Karens I have met in my life were actually very nice ladies, and I would be interested to know when their name started to be used to represent something negative.) Can you tell us what a KAREN means to you?

...an_alias on this. There is no justification for NOT refunding directly to our Rates accounts. While Covid may be nobody’s fault, if their deliveries are halved then there must be a cost saving. And ONLY a monopoly or Government can get away with this, as an_alias pointed out.

In my walk I note a lot of glass bins and food bins out. The food quite smelly . Seems as the recycling so a waste of time as it’s all going to landfill. So all a big fat waste of time sorting , washing etc . Only some may be informed by sunlive but I have heard nothing from council about anything, no radio ads ? Internet ? etc. Good job I don’t bother with the food scrap bins . I note the 22 percent rise on my rates, and additional increase in cost of water on top . I also note the empty buses and $250 transport levies in rates and regional council. Also the potholes in the roads but bike lanes proliferation. A council untouchable by democratic process.

why are they not wearing gloves,what a bunch of KARENS,So if it goes to 3 they will pick it up,for crying out loud just do your job and get on with it instead of complaining all this who ha over safety is rubbish,we pay rates,i remember when the rubbish truck drove in middle of road and 2 runners one either side threw those big galvanized bins to the guy on the back all day,at Christmas time most people left a few beers out for them or gave them a little something, also any bottles that were out were put in beer crates and used for them to do what they want,gosh pennies add up 6 pence for large bottles penny for beer bottles etc good on them,not like today have side lifters and complain if the bins are a bit full,come on you Karens stop Whinging about work ,out.thankssunlive

Yadick understands. He’s an authority on everything. We should all just agree with Dr Yadick and the world will be a much much better place.

The risk of Covid19 and appreciate the safety measures taken however Gary doesn’t exactly ’DETAIL’ the extra costs to dump that are incurred due to Covid19. Can you explain in more detail because you are in fact saving as well by not collecting 2 lots and therefore have cut running expenses etc. The fact that some bins will be fuller means nothing because the cost should have been calculated on 3/4 to full bins surely.

Use One Bin Only

During lockdown just one bin is all that is required. Recycling is nowhere near as important as protecting people from Covid.

Only a monoploy does not refund

Thanks Sunlive for questioning the Council on this. To me ONLY a monopoly gets away with not refunding for a service THEY are NOT providing. Your increased costs are not our fault but clearly your OWN, as a business you would not get away with this.