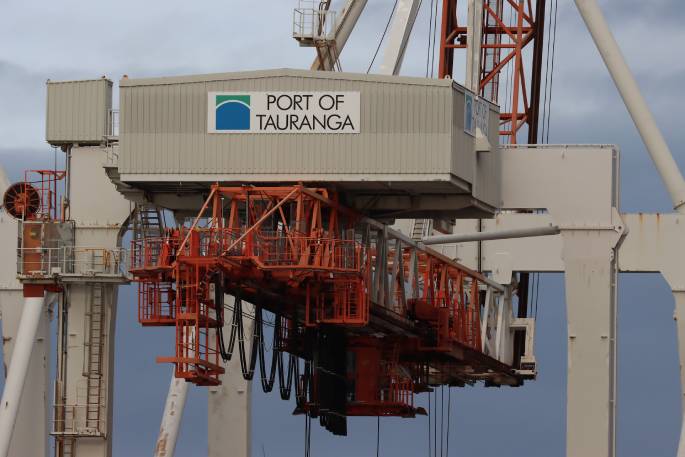 The Port of Tauranga is one of the largest ports in New Zealand.

Port of Tauranga is reporting Group Net Profit After Tax of $102.4million, a 15.4 per cent increase, on 25.7 million tonnes of trade.

Port of Tauranga Chair, David Pilkington, says the results are very pleasing considering the well-documented supply chain challenges of the past year.

“As the world continues to grapple with the devastating effects of the Covid-19 pandemic, there has been major disruption in international supply chains. Constrained capacity in parts of the New Zealand supply chain, especially at Ports of Auckland, has exacerbated delays and restricted our ability to adapt quickly to the needs of importers and exporters,” says Pilkington.

“International shipping capacity is in hot demand and costs for shippers have skyrocketed.”

Within this context, he says Port of Tauranga has proven to be strong and resilient.

“Our diversity of cargoes gives us some resilience in terms of revenue, and our long-term freight agreements with key customers give us some certainty of cargo volumes,” he says.

“However, it is not efficient to run a container terminal at more than 100 per cent capacity and our costs, including straddle carrier diesel use and the related carbon emissions, have grown as a result of the congestion we have had to endure. In recent months, we have also experienced the labour shortages felt by many other industries.”

Temporary surcharges for long-stay containers, introduced in January to discourage inefficient cargo flows and relieve yard congestion, helped Port of Tauranga to recover a portion of the additional costs being experienced. Parent Company revenue increased 8.9% to $323.5 million, while operating costs increased more than 15 per cent.

Port of Tauranga Chief Executive, Leonard Sampson, says the Port’s team and contractors have done an outstanding job in the face of the challenges.

“The evolving response to the Covid-19 pandemic has had a significant impact on Port of Tauranga operations. Our team has really excelled and deserves special acknowledgement.

“We saw 106 fewer container vessel visits between September 2020 and June 2021. However, the average cargo exchange increased 21.7% due to the reduced vessel frequency and shippers maximising available capacity,” he says.

Near record surges of container volumes in the months of October and December, compounded by constrained rail capacity, caused significant congestion, reduced productivity and weeks-long delays transferring import containers by rail to Auckland.

Additional trains from KiwiRail since May have eased the pressure, however container vessels are still arriving “off window” and are being processed in the order they arrive.

Sampson says Port of Tauranga is extremely grateful for the ongoing support of its customers, who are experiencing extraordinary disruption and uncertainty.

“I’m really pleased that the strength of our partnerships has shone through in these testing times,” he says.

Sampson says congestion is unlikely to be resolved permanently until vessels can return to schedule and Ports of Auckland is back operating at full capacity. This highlights the need for Port of Tauranga to expand its capacity to cater for future demand.

“We have applied for resource consent to extend our container berths to the south of the existing wharves, by converting existing cargo storage land. This $68.5 million project is a vital piece of national infrastructure if we are to meet future cargo demand and have a resilient supply chain,” he says.

“We are also pursuing our plans to automate some of the container storage at the terminal to increase our capacity within the current land footprint. Our capability will be further extended with the opening of the inland port at the Ruakura Superhub near Hamilton in mid-2022.”

The inland port is being developed in a 50/50 partnership with Tainui Group Holdings.

Total trade increased 3.8 per cent compared with the previous year, growing to 25.7 million tonnes, although container numbers were 4.1 per cent fewer at 1.2 million TEUs.

Log export volumes bounced back from the 2020 lockdown, increasing 14.3 per cent to 6.3 million tonnes.

Dairy product exports decreased 1.9 per cent to just over 2.3 million tonnes, reflecting a later-than-usual season and a reduction in trans-ship volumes.

Frontline workers are subject to regular Covid-19 testing and, with legislation introduced mid-July, are now subject to mandatory vaccination.

They must receive their first dose by 30 September, and their second dose by November 4. Only four of Port of Tauranga’s 49 eligible employees have not yet been fully vaccinated and redeployment options are being explored for any who do not meet the September deadline.

Port of Tauranga treats all visiting vessels as if they have Covid-19 on board and will continue to do so.

The Company strongly recommends vaccination as an additional measure to the existing Covid-19precautions.While productivity has decreased due to the congestion, the overriding concern has been for port workers’ safety.

“We have made it very clear that safety must be our number one priority and that speed should not come at safety’s expense,” says Sampson.

Air and water quality continues to be a major focus for the Port. The Port expects de-barking of export logs to continue to increase, which has the dual benefits of reducing the need for fumigation and minimising dust and debris.

While the Port continues to comply with all of its stormwater resource consent conditions on both sides of the harbour, we are also investigating options for additional stormwater treatment at the Mount Maunganui wharves.

Port of Tauranga has decided, after consultation with stakeholders, to insist that recapture technology is applied to 100 per cent of methyl bromide fumigations on log stacks from January 1, 2022. This is over and above any current regional or national requirements.

The outlook for the next financial year remains uncertain.

Sampson says he is confident that Port of Tauranga has resolved land-side congestion issues for now.

“However, the disruption to the international supply chain remains, and the challenges in Auckland are unlikely to be resolved soon,” he says.

Covid-19 precautions will continue to impact efficiency and costs as we continue to prioritise the health and safety of our team members, their whanau and the community. In recent months, we have witnessed a worsening sector-wide labour shortage that could potentially have an impact on operations .Port of Tauranga will provide earnings guidance for the 2022 financial year at its Annual Shareholders’ Meeting on October 29.

-Subsidiary and Associate Companies’ earnings of $18.6 million, a 46.0 per cent increase

I hope you’re wrong. It is a very long time since I used to occasionally seagull on the Auckland wharves but the pay was good and the work was not onerous. Do you have evidence that these workers are poorly recompensed? There was a time when it was "normal" to exploit the workforce, but modern Management practice strongly discourages it. Good managers know that the staff are the most valuable asset for any Business, and make sure there is minimal turnover and that staff are well and fairly treated. I’d be surprised if you are right, and I really hope you are not. (Nothing personal...)

Í wonder why this article didn’t mention anything about port staff or contractors receiving any monetary reward associated with the record increase in volumes?! They all are "essential" workers, generally on a low wage anyway, they are required to do longer hours to ensure that the movement of these higher volumes are completed on time and we are all aware the associated negative effects on staff. As usual the staff that do the work miss out on the rewards, nothing changes does it...