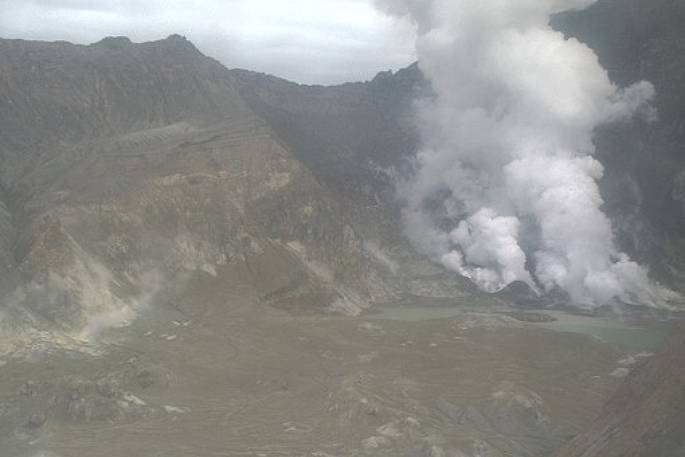 "At about 7.40am on Sunday, a period of minor ash emission was observed from the active vent area at Whakaari/White Island.

"Based on webcam observations, the ash emission persisted for about two minutes. It was not visible in camera images from Whakatane.

"Based on the short duration of the activity, it is unlikely to have produced a plume large enough to create any ashfall, even on the island."

Steven says at 7pm on Thursday, August 19, a notable volcanic earthquake was recorded at Whakaari/White Island.

He says the earthquake continued for about 10 minutes, but it was not accompanied by any eruptive activity that could be observed, either by webcam images, or by air pressure sensors.

Steven says no relationship has been established between the volcanic earthquake and the minor ash emission three days later. Other seismic activity at the volcano has been minor.

"These observations do not change recent interpretations that a fresh magma intrusion to shallow levels has occurred since June 2021.

"The ash emission observed on Sunday may be related to shallow magma beneath the active vents, but its short duration suggests that unstable material falling into the active vent, subsequently to be fragmented and then ejected by gas pressure, may be a more likely explanation.

"This type of activity has occurred many times in the past, including since the December 2019 eruption (an example here)."

Steven says equipment that provides real-time monitoring on the island is currently degraded and they are continuing to work on restoration options.

The current level of activity is consistent with moderate levels of unrest.

As such the Volcanic Alert Level remains at 2 and the Aviation Colour Code remains at Yellow.

The Volcanic Alert Level reflects the current level of volcanic unrest or activity and is not a forecast of future activity.

While Volcanic Alert Level 2 is mostly associated with volcanic unrest hazards (including discharge of steam and hot volcanic gases, earthquakes, landslides and hydrothermal activity), potential for eruption hazards also exists and eruptions can still occur with little or no warning.

... make it an official landfill site and we can overwhelm it with rubbish...