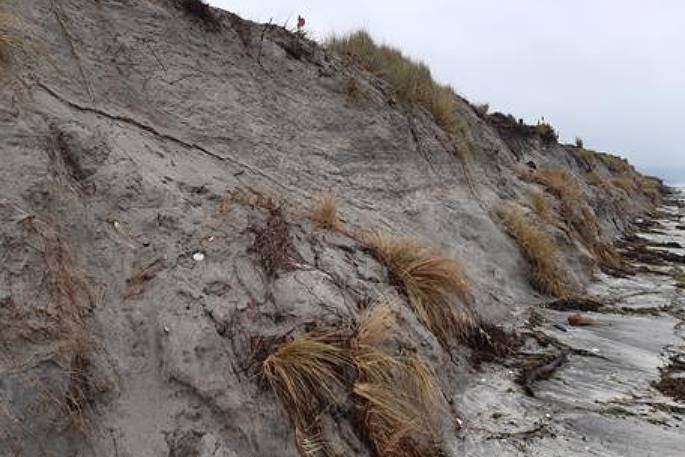 Erosion after a storm. Photo: BOPRC.

The Bay of Plenty’s beaches have taken a battering this winter between wild storms, tides and the effects of climate change.

Erosion can currently be seen along the coastline, from as far west as Waihi Beach right through to the East Cape.

Coast Care Bay of Plenty would like to remind beach lovers that erosion is a natural process and the dunes do regenerate themselves.

Bay of Plenty Regional Council’s Coast Care coordinator Rusty Knutson says sand dunes are a natural buffer between the land and the sea and a healthy dune system was our first line of defence against coastal flooding.

But sand dunes were a dynamic system and we have to expect them to change over time, he says.

Knutson says wild storms and king tides were events that were predicted to become more common due to both rising sea levels and increasing storm intensity as a result of climate change.

"After a big storm lots of sand can be lost from our dunes in a process called erosion. But when the weather settles down and weather patterns change, sand usually builds back up by a process called accretion.

"This is when smaller waves push sand back onto the beach and gentle winds then push sand into the dune system where it gets trapped by our native sand dune plants which  rebuilds the sand dune system." 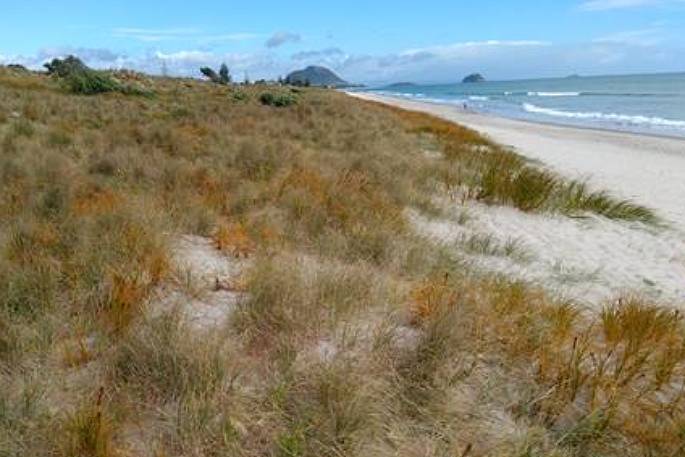 Knutson says a healthy frontal dune, those planted with native grasses (spinifex) and sedges (pingao), also absorbed energy from storm events and reduced damage to both dunes and the infrastructure sitting behind.

They are also able to regrow as they have long, deep root systems when conditions become more favourable, he says.

"So, though it may look like some of our dunes are in danger at the moment we need to remember this is a natural process and they do regenerate themselves over time."

Knutson says if you are concerned about the dunes, the best thing you can do for them is not walk over and trample the fragile native plants.

Pingao and spinifex can grow in sand and survive summer droughts and big waves but trampling over them will kill them, he says.

Well said. Totally agree with you.

The Bays beaches have taken a battering this winter between storms, tides and the effects of "climate change"...CCBoP would like to remind that erosion is a... natural process... (operation popeye, operation northwoods, operation seaspray). go tell china about climate change or better yet go stop all the ships burning bunker oil about it, tired of fools like this courtjester trying to tell all of us peasants we need to cut down because ’climate change’ why not take it to where its actually happening? oh cus’ you dont actually care, a shill among the sheep. one ship burning bunkerfuel pollutes as much in 1 day of use as all the cars in the world do in a year. al gore would be so proud, wait werent we supposed to be ice free years ago? look at the real data and see theres more ice gained than lost. oh.

..as a matter of the ongoing desire to scare people unnecessarily with the ’usual’ mention of ’climate change’, as also stated in the article (whoever wrote it) is quite usual and normal.....so...the problem is? Everything we currently know will ’change over time’....the question and issue is our ability to accommodate these natural changes.......