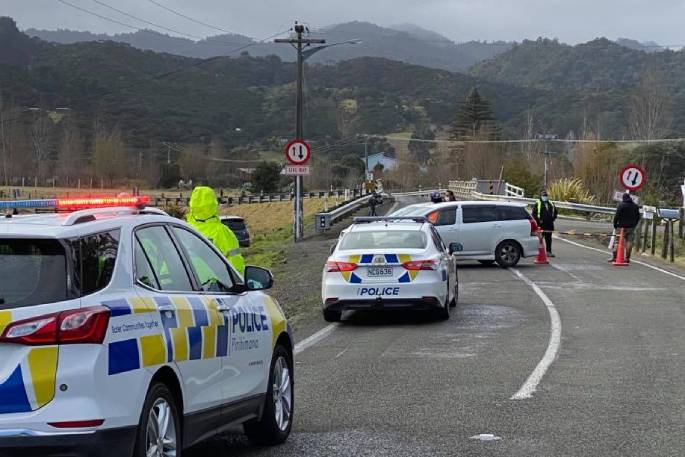 A community roadblock at Manaia in the Coromandel. Photo: Facebook / Coromandel's CFM.

The Coromandel community is cautiously optimistic it may have dodged a Covid-19 bullet - with widespread testing so far revealing no sign of the virus.

It's a case of so far, so good when it comes to Covid-19 in the small town - where the Devonport man whose positive test visited with his wife 10 days ago.

Umu cafe is one of nine locations of interest after that visit, but co-owner Josie Fraser says so far, all of her staff had returned a negative day-five Covid-19 test.

She says she's cautiously optimistic at this stage.

"Maybe he wasn't a spreader, I don't know, but somehow we might have escaped."

She says they aren't in the clear yet, and will be awaiting their day 12 results to know for sure.

The testing turnout in the town and it's surrounds has been huge - the chief executive of Māori health provider Te Korowai Hauora o Hauraki, Riana Manuel, estimated nearly 60 per cent of the local community had had a swab.

"With everyday that goes by, we all breathe a sigh of relief but we're all too aware that Wednesday, Thursday, Friday will mark the twelve day testing and we're really just waiting to see the outcome of that," she says.

Waste water testing has also returned negative results - but Manuel says while that gives some comfort, it doesn't rule out the virus being in the community due to the high number of homes with septic tanks.

"The water supply only caters to the immediate township, with everybody living beyond that area using septic tanks.

"Especially for those smaller communities like Manaia, Harataunga, Tuateawa, up in Colville, Whangapoua and Kuaotunu, they are all on septic systems."

The local turnout hasn't just been huge for testing but for vaccines too - one of the testing centres has become a one stop shop, and after being swabbed people are encouraged to head across the carpark for a jab.

Waikato DHB, which covers the Coromandel area, recorded more than 3700 vaccinations on Sunday.

And the people who are behind all that testing and swabbing have not gone unnoticed.

Manuel says, in addition to community cat Helen Clarke who turns out day after day to keep them company, there had been TikTok dance challenges from testers, well wishes from those being tested, and plenty of donated kai.

Now the community wants to repay the favour and Coromandel woman Ursula Magdalena Walsh is organising a wee whip around to collect money to buy cafe vouchers for frontline staff.

"As a nurse myself, I know how hard nurses work anyway... I think they're doing an incredible job in a time like this, you know? Especially in a pandemic," she says.

"I just wanted to show that we care and that we love them and we appreciate what they're doing."

Hundreds of dollars have been donated so far - it's a win-win for hard hit cafe's which Umu owner Josie Fraser says also need a boost.

"It's definitely a scary time in terms of the business, we don't know what the repercussions are going to be - we, of course, don't know when we're going to go down a level and I think it would be really premature to go down too quickly."

The level 4 lockdown will stay in place in Coromandel, along with the rest of the country apart from Auckland, until at least this Friday when the situation will be reviewed.

Of all the beautiful pictures of the stunning Coromandel why are you using one of an illegal roadblock. In these vigilantes minds it is only, when you couple it to the article, giving weight to their unauthorized, illegal actions. It’s a great article which is normal for Sunlive but is let down by the choice of headline picture.