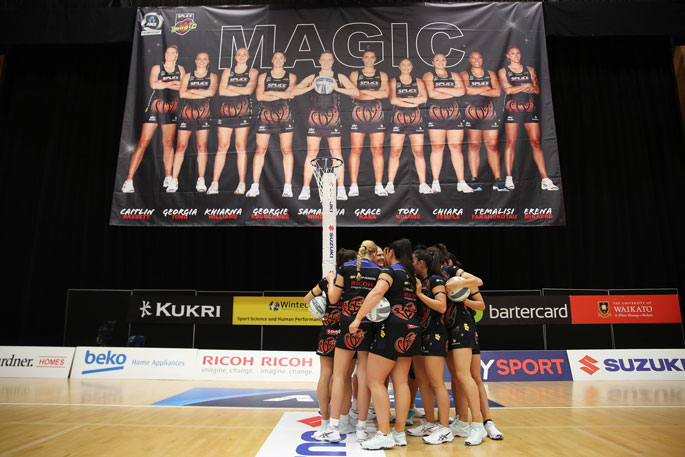 The Waikato Bay of Plenty Magic have announced the signing of Silver Ferns internationals Claire Kersten and Bailey Mes for next season.

They join another recent signing, Silver Ferns captain Ameliaranne Ekenasio, as the side attempt to improve on a disappointing 2021 campaign.

They are joined by defender and new Silver Ferns Development Squad member Oceane Maihi as the new faces of a Magic side.

New Magic coach Mary-Jane Araroa says she is pleased to be able to strengthen areas of the team with the inclusion of world champion shooters Mes and Ekenasio while the experienced Kersten would prove an ideal foil to captain Sam Winders in the midcourt, and rising star Maihi would bring a new dynamic to the defensive end.

“It’s really important to the Magic family that we retained our connection to our region through current players such as Sam, Erena (Mikaere) and Khiarna (Williams), Georgia (Tong) and Georgie (Edgecombe) but we are also excited to add to the Magic mix with current and future Silver Ferns and Development Squad members.”

Mes, who has spent 10 seasons with the newly crowned ANZ Premiership champion Mystics, makes the move south to the Magic for a new challenge for her netball career.

Predominantly selected in the shooting circle, Mes can also cover the wing attack position - a position she was initially selected for in the Silver Ferns in 2012.

“It is always a difficult decision to move away from a team like the Mystics who have played a big part in my netball career, but I’m excited about a new opportunity and the chance to work with different combinations,” says Mes.

“It is a bit of the unknown for me but I find that refreshing and I’m looking forward to the new season.”

Silver Fern Claire Kersten, who captained the Pulse this year, says she is looking forward to teaming up with Winders in the midcourt and the chance to grow her own game by joining a new environment.

“It was a tough decision to leave the Pulse but I’m really excited to be joining the Magic next year. This is going to push me out of my comfort zone and I think that’s a positive for my game.”

Araroa said the inclusion of Maihi into the defensive end was exciting having followed the progress of the defender during this year’s ANZ Premiership.

Maihi was an impact player for the Stars this season with her performances catching the eye of national selectors and earning a place in the Silver Ferns Development Squad.

More court time will be the goal for the 1.83m in-circle defender who said she was looking forward to joining the Magic team.

“I’m really excited to take that next step with the development of my game and for it to be in Magic colours,” she says.

As expected, Australian international and last year’s star signing Caitlin Bassett will not be playing for the Magic this season, a decision she revealed on Instagram last week.

Araroa, who is yet to name her 10th player for the 2022 squad, has paid tribute to the Australian Diamond.

“C-Bass is a professional, brings great team spirit and is an awesome team member, who will be missed and we wish her well,” she says.

Araroa also acknowledges experienced players Grace Kara and Temalisi Fakahokotau “who had great on court presence and game smarts along with their contribution as senior leaders within the Kaitiaki roopu.”

Araroa was also grateful for the services of Chiara Semple and Tori Kolose “who will both be remembered for their bubbly personalities and eagerness to learn.”

"We wish our departed players all the best for the future and know you will always be part of our Magic whānau and heart."

Magic general manager Gary Dawson says he is pleased to retain the core of this year’s team but also strengthen all areas of the court with their new signings for 2022.

“We are extremely proud of the Magic’s netballing history and the success this region has enjoyed.  We welcome Bailey, Claire, Oceane and Ameliaranne to the Magic whānau and look forward to developing this unit into another successful Magic chapter.”

The Magic finished bottom of the 2021 ANZ Premiership, losing all but one of their fixtures.

With nine players currently confirmed, the Magic will announce their final signing for the 2022 ANZ Premiership season in the coming weeks, with former SIlver Ferns captain Katrina Rore strongly rumoured to be on her way.