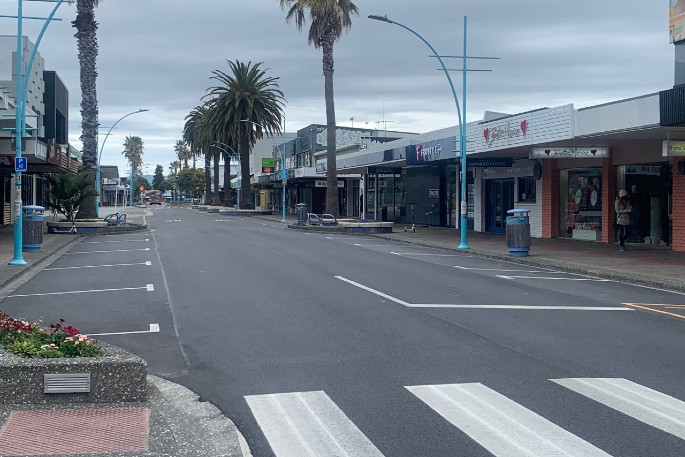 A deserted Mount Mainstreet at Mount Maunganui, as residents follow the rules and stay home unless needing to visit essential facilities such as supermarkets, diaries, pharmacies.

New Zealand Police continue to ask people to stick to the rules of Alert Level 4 over the weekend.

"We know from previous experience that New Zealanders, by and large, comply with the restrictions, and we know that following the guidelines does work but we do need compliance," says a Police spokesperson.

"Even though it’s the weekend, we remind people that exercise should be in your neighbourhood only.

"Under Alert Level 4 restrictions, you are not permitted to drive somewhere for the purposes of exercising."

Police staff are out and about around the country conducting reassurance checks, and people can expect to be questioned about their movements.

"Police has a low tolerance of unlawful gatherings and people can expect that we will look to enforce the current restrictions."

Since Alert Level 4 came into place, Police staff have carried out 2964 reassurance checks at essential facilities such as petrol stations, pharmacies, supermarkets.

Over that same period, 4015 prevention and reassurance patrols were completed, along with 2214 business checks in relation to the pandemic response.

"While compliance overall has been good, there is a small minority of people who have come to the attention of Police and the actions of these people are incredibly disappointing," says a Police spokesperson.

Since Alert Level 4 came into place, 17 people have been charged with a total of 20 offences nationwide.

Of the 20 charges filed, 11 are for Failing to Comply with Order (COVID-19), 7 for Failure to Comply with Direction/Prohibition/Restriction and 2 for Health Act Breaches.

In the same time period, 53 formal warnings were issued to 53 people.

Thirteen of the formal warnings were for Failing to Comply with Order (COVID-19), 16 for Failure to Comply with Direction/Prohibition/Restriction and 24 for Health Act Breaches.

Police have received a total of 3,318 - 105 online breach notifications.

The majority  - 72 per cent -  of calls were requests for information, and 28 per cent were to report perceived Covid-19 breaches.

The breakdown of these offences is as follows:

"We have all seen what happens overseas when people ignore the rules, and it’s imperative that everyone stays home," says a Police spokesperson.

"Everyone knows what is expected of them, and it will take a collective effort to stop COVID-19 in its tracks."

Has this police spokesperson even read the law or is just reading from a script? who authored the script? The Law (covid-19 health order 9 2021) 16(e) reads quite different.