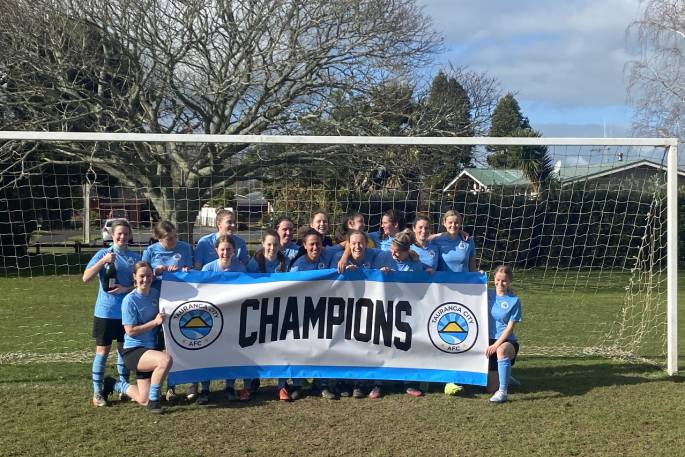 The Blues secured the title with two games remaining following a comfortable 6-1 win over Waikato Unicol at Jansen Park in Hamilton last weekend.

A brace apiece for both Kerri-Ann Jones and Abi Collins helped Tauranga on their way with Emma Cawte and Sophie Johnston also finding the back of the net.

“It was really pleasing for us to win the league this year,” says Tauranga City director of football Barry Gardiner.

“Our goal at the start of the year was to try and get a team in the Northern Regional Football League and the first step to do that is to win the league. We have managed to achieve that with two games to go so it has been really pleasing.”

Tauranga City have won 13 of their 15 league games this season and maintaining an unbeaten record is now the goal for the W-League conquerors.

“The way we have done it as well has been excellent,” says Gardiner.

“We are still undefeated and the goal for the girls now is to go the whole season undefeated. They have played really well throughout the year.”

Jones’ brace at the weekend took her league tally for the season to 17, making her top-scorer. Following her in second place at present is Collins on 16.

An attacking brand of football has seen the City side score goals for fun, 67 in fact, in 15 league games.

“We have been really good this season,” says Gardiner.

“We have scored a ridiculous amount of goals this season. We beat Claudelands Rovers, who are currently second in the league behind us, 4-0 and 5-0.

“The girls have blown everyone away this season.”

Promotion is the goal but it is still up in the air. A play-off date is currently penciled in for September 18 and 25 but Gardiner says they are still waiting for confirmation.

He says the win is not only good for the club, but for the whole region.

Traditionally, women’s football in the area has been dominated by Waikato and many young footballers have headed to Hamilton to play the sport.

Gardiner is hopeful that this success, along with a concerted effort from around Tauranga, can help change that.

“It is great for the club and the region,” he says.

“For our younger players we want to try and provide a pathway in the Bay of Plenty.

“I think that is something for all of the clubs in the Bay of Plenty region to really push a pathway for players here in Tauranga so they don’t have to go out west to get what they need from a development point of view.”