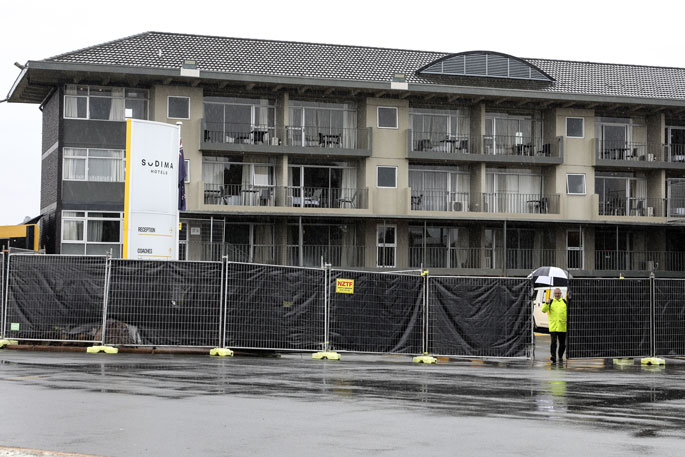 A Rotorua leader has told the Government to "bugger off" when it comes to introducing new managed isolation facilities in the city.

Last week, the Ministry of Business, Innovation and Employment confirmed it was in the early stages of investigating additional MIQ facilities, including in Rotorua, but no decisions had been made.

It followed a unanimous vote by Lakes DHB members on Friday issuing an urgent plea for the Government to not establish any further MIQ facilities in Rotorua, citing pressures on hospital staffing.

On Monday, the Ministry of Business, Innovation and Employment (MBIE) refused to comment further on the issue.

"We don't look like a vibrant city anymore. Canvas-covered fences surrounding large accommodation buildings, adults walking aimlessly up and down Fenton St, social problems spilling on to the streets. Shabby comes to mind."

She says Rotorua is "grateful" for funding from the Government, such as the Provincial Growth Fund, but she hopes "we aren't being made to pay for that now".

Fellow DHB member Lyall Thurston led the charge in the DHB's opposition to further facilities in Rotorua in its meeting on Friday.

On Monday, he said he had received many calls from hospital staff backing his position.

"Now's the time for other towns to step up."

He understood two further hotels in the city were being considered as new managed isolation facilities, and MBIE had ruled Queenstown out "because it's a tourist town".

"Where the hell does that leave Rotorua? It's a real stick in the face."

He described the impact of staffing for managed isolation facilities on the broader health system in the Lakes rohe as "untenable pressure".

Thurston said Rotorua was an "easy hit" and places such as Tauranga should be considered for the new facilities.

"There other towns and cities in New Zealand that have appropriate accommodation and need to step up."

Queenstown mayor Jim Boult said the issue of MIQ in his city had not been raised since last year and at the time, the main challenge was that Queenstown had limited hospital facilities to support managed isolation.

His concerns about hospital capacity remained, although he had an open mind to "reasoned argument".

Bay of Plenty DHB did not respond to a request for comment.

He said it was important managed isolation facilities did not have a knock-on effect to hospital services, particularly acute care.

"[The] Government should be looking at other places such as Queenstown or Tauranga, not just burdening Rotorua. We're doing more than our fair share."

He said it wasn't just health staffing that was impacted, but managed isolation in three Rotorua hotels impacted accommodation capacity for tourists, which also affected the hospitality industry in the city.

"Increasingly, I'm hearing about people visiting Rotorua for a day and not staying."

A Rotorua Economic Development spokeswoman said the organisation did not support any more managed isolation hotels in Rotorua.

However, she disagreed that accommodation capacity was impacted significantly by MIQ.

"All of our data tells us we have plenty of capacity available for visitors, both domestic and international."

In a written statement, she said Rotorua could not sustain more MIQ facilities.

"Running MIQ facilities here impacts on local DHB, police and security resources, and those are resources our community misses out on.

"Imposing more MIQ facilities on Rotorua will increase risk with regard to community safety and health services and that's something we are very concerned about."

"We also need to retain capacity for visitors – which we currently still have."

"Ultimately, others will make the decisions but we have been clear about our views and concerns and have been assured these will be taken into account."

A Ministry of Health spokesman said the organisation was aware of the various demands being made of the health workforce not just in its contribution to MIQ but also the RSV outbreak and Covid-19 vaccine roll-out.

"Consideration of workforce requirements is always part of any decision to introduce a new service, such as an MIQ facility."

Local Democracy Reporting asked MBIE if it had ruled out Queenstown as an MIQ provider and why.

It also asked if MBIE had considered the impact of MIQ on the tourism economy of Rotorua, and how many more managed isolation facilities it was hoping to establish nationally, along with the capacity it was aiming to build.

The ministry was also asked for clarification on Thurston's claim two further hotels were being considered for MIQ use in Rotorua, and if so, which hotels they were.

On Monday, MBIE refused to comment further on the issue.

Last week, joint head of MIQ Megan Main said MBIE was "in the very early stages of investigating potential options, including in Rotorua, but no decisions have been made."

A final decision would be made by Cabinet, she said.

They have a point.

Nobody wants these facilities in their town because of the real or imagined risks associated with them. And yet, they have to go SOMEWHERE. Tauranga Hospital is also overloaded and would struggle to facilitate proper care, and the Waikato is probably much the same. Proper investigation needs to be done to find possible sites around the country, and then maybe a lottery draw can decide it by chance. There is also the option of NOT expanding existing MIQ and simply limiting traffic into the country. If we implemented a policy where all travel required vaccination, we could seriously ease this load.

One need only look at the world news to get a COVID reality shock and the benefits for being prepared, and not having to roll with the punches this disease deals out in quick succession. Empathy can be in short supply at times !