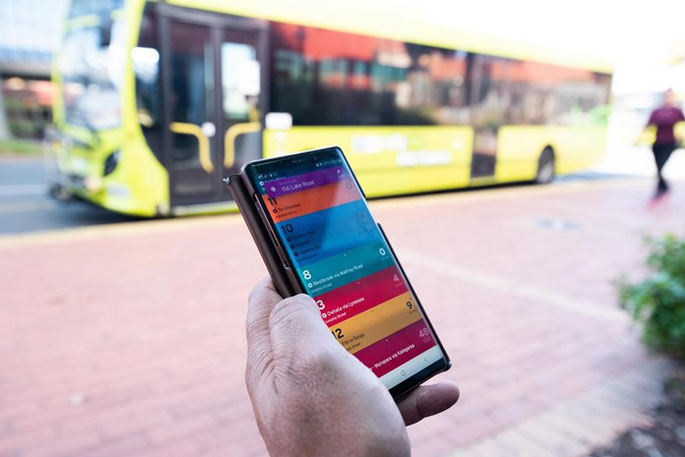 Transit is a mobile app providing real-time public transit data. The app functions in over 175 metropolitan areas around the world. Image/Bay of Plenty Regional Council.

All Bay of Plenty Bayhopper and Cityride bus users can now use the Transit app to help plan their journey – no matter which part of the region they live in.

Transit is a phone app that shows real-time tracking and information relating to the region’s Bayhopper and Cityride bus networks, which means less time waiting at the bus stop for passengers.

The data system that feeds into the app has been replaced, making the app’s information more accurate than it previously was. It now receives GPS location information from all buses on the Cityride and Bayhopper networks every five seconds.

The introduction of the new system has also coincided with the roll out of its use region wide, meaning the app is now able to be used across the Tauranga, Rotorua and Whakatāne bus networks.

Bay of Plenty Regional Council Public Transport Committee Chair Andrew von Dadelszen says the roll out of Transit across the region is exciting.

“Transit is already recording around 170,000 uses per month by about 5900 individual devices in the region.

“Most of them would be in Tauranga but it’s promising to already see a demand for the application and that it is being widely used already.”

Cr von Dadelszen says by downloading Transit and using public transport, commuters are also helping to reduce their carbon footprint to get to and from work and around the region.

Like the Bee Card, Transit is also used in other parts of New Zealand including Auckland, Christchurch, Dunedin and Hamilton so users can use it when they’re visiting other parts of the country.

@ Yadick. Yup. Just put the $XXL bill for it, on our tab. Great use during these lock-downs especially. Public transport is fighting the head-winds.

The seven people that use our buses will be so happy . . .